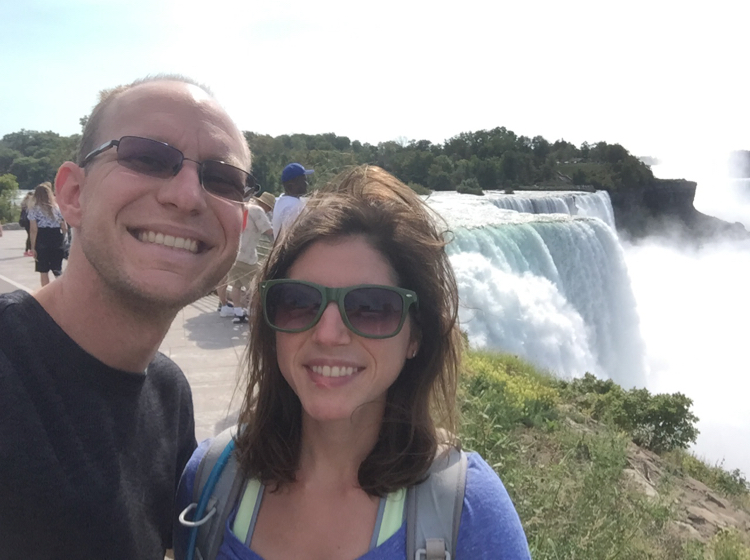 Again it might have been the American tendency in travel. One goes, not so much to see but to tell afterward.
~ John Steinbeck

Wednesday morning we headed into Cuyahoga Valley and bicycled from one end to the other on the Tow Path trail. The train ride back to our starting point was a lot of fun and provided a fabulous opportunity to see the park from yet another point of view.

We left our trip plans open because of the issues we’d been having with the car. Getting up to Maine and breaking down didn’t sound like our idea of a good time (though it would definitely still be an adventure of some sort). So we agreed that if there were any problems while heading to or during our time in Cuyahoga Valley, we’d return to Kentucky. We had no issues what-so-ever, though, so after our bike and train ride we packed up and headed north east.

Thursday morning we stopped by Niagara Falls. What a fabulous place for lunch! As you may know, we aren’t big fans of touristy places, so the falls didn’t hold a huge appeal to us. Without paying to go down to the bottom, we couldn’t feel the full force of the volume of water moving (by standing next to it, not underneath!), so we probably didn’t get the complete experience. None-the-less, we can now honestly say “yes” when asked the inevitable “have you been to the Grand Canyon/Yellowstone/Niagara Falls?” Apparently that is, collectively, “The American Experience” trifecta. 😀

After lunch we continued east and found a delightful free campsite in the Chataqua State Forest in NY.

On Friday we made it just to the Vermont border when the car started stuttering. Pulling into the visitors center we assessed our options. There was a nearby Dodge/Chrystler dealership that was open for just a few more minutes so we headed that way. By the time we arrived the car was running ok and the check engine light was off. The service department was closing in about 5 minutes and didn’t work on Saturdays so we decided to press on. A few more miles and one big hill later, the stuttering started again. We took the first exit we could, called the closest dealership – just missed them but they would be openin in the morning – and headed to a nearby RV park/campground for the night.

First thing in the morning we drove to the dealership. They gave us a loaner for the weekend and looked at the car Monday. Seems like one of the valves is leaking, which is roughly a $2500 fix. Car’s worth about $2000. Hmm… It’ll cost us about $2900 to rent a UHaul and trailer to tow the car home. Ultimately, they said we should be able to drive it home if we take it easy. That’s our favorite option, so we hit the road on Monday.

A few hours later, it started stuttering again and shuttering rather violently. Oh no! It’s just after closing time everywhere so we snag a motel in Herkimer, NY for the night. The next morning we limp over to a mechanic who adds some oil, replaces one of the spark plugs that is horribly fouled, and puts in a new intake gasket set before sending us on our way. He didn’t know why the spark plug was so corroded since it had just been replaced, but since we had gotten around 2,000 miles out of the first one, he said it should get us home.

Back on the road and, seemingly running smoothly, we coffee up and keep on moving, slightly afraid to stop for fear of another problem cropping up. From 2pm until about 5:30am we keep driving and finally pull back in at Benton, KY. We sleep for a few hours in our own bed, back in the RV, and are thrilled to be here!

So we didn’t quite make it up to Maine and Acadia. We spent some time in lovely towns in Vermont and northern New York. Though we’ve driven through the tip of Pennsylvania, twice, we haven’t yet stopped in the state. We’re back in Kentucky, in time for the family BBQ and are thrilled at the chance to visit with family. They also seem pretty happy that we are back for a bit.

The car is currently running but will have to be dealt with eventually – but for now we’re close enough to people we know that any issues are merely frustrating and not disasterous. Ashley’s offered to start working earlier than planned at her Amazon job. Matthew’s starting the job hunt again. For now, we expect to be in Kentucky until January, adding to our gas fund and taking some short trips to nearby states and National parks. And that’s enough planning for us – we definitely do better with short term targets than actual plans. 😀

P.S. – Curious where we rest along our travels? Here’s a few of our overnight spots – adventure-some.com/personal/you-slept-where/