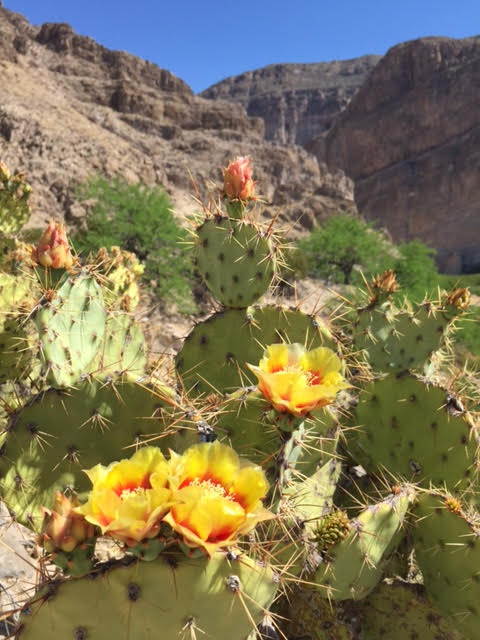 The cacti were blooming

A traveler! I love this title. A traveler is to be reverenced as such. His profession is the best symbol of our life. Going from ________ to _______; is the history of every one of us.
~ Henry David Thoreau

Wowzers, has it been a full week! Our last email was sent just before losing any kind of signal for a few days as we headed into Big Bend National Park. Though we didn’t get to back-country camp, we lucked into a great spot in the Rio Grande Village Campground – tucked right into the trees on the back of the campground with a beautiful view of Mexico’s Maderas Del Carmen. It was private with plenty of space, and was in the “generator free” zone so nice and quiet! We saw a javelina and a handful of roadrunners in the campground throughout our stay. 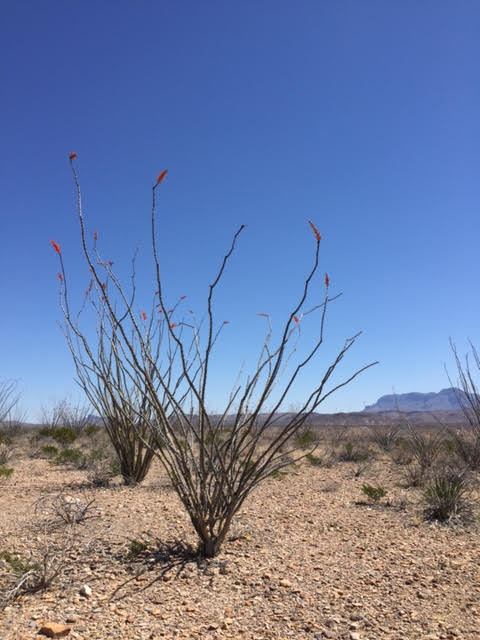 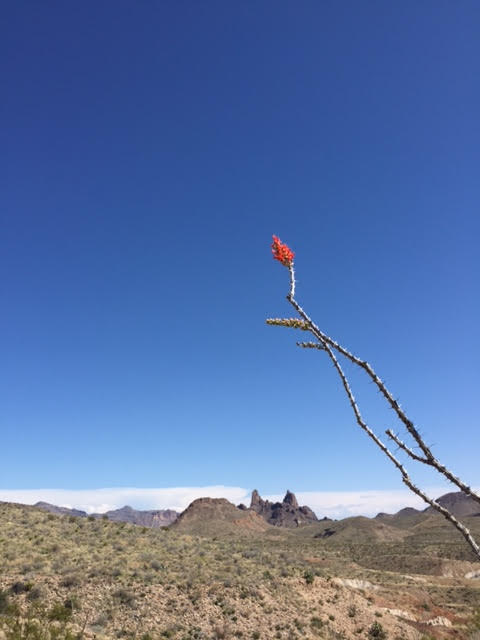 We’ve seen Ocotillo before, but never caught it blooming.

After getting settled, we motorcycled across the park to the Santa Elena Canyon for a hike along the Rio Grande into the canyon itself. After enjoying the cool shade provided by the Mexican cliffs, we headed back east toward the RV for the night. It was incredibly hot, which surprised us for so early in the year (95-100 F each day) so we pulled the grill out and cooked outside as much as possible. 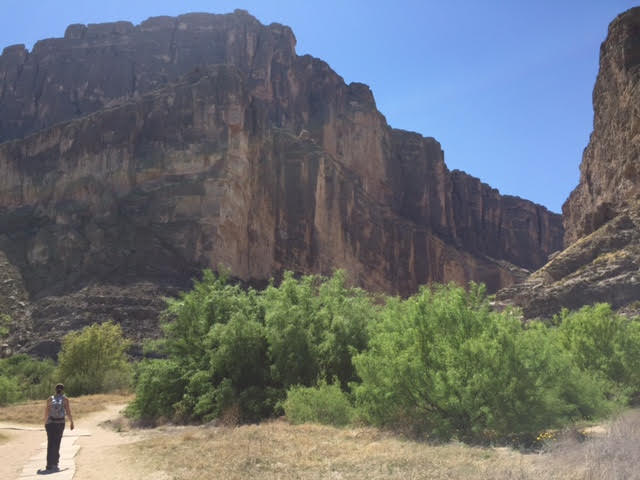 Hiking into the Santa Elena Canyon. 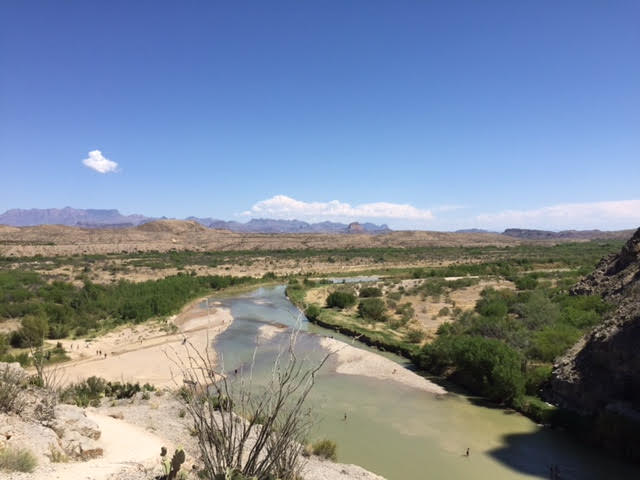 View from the mouth of the canyon, out into the desert 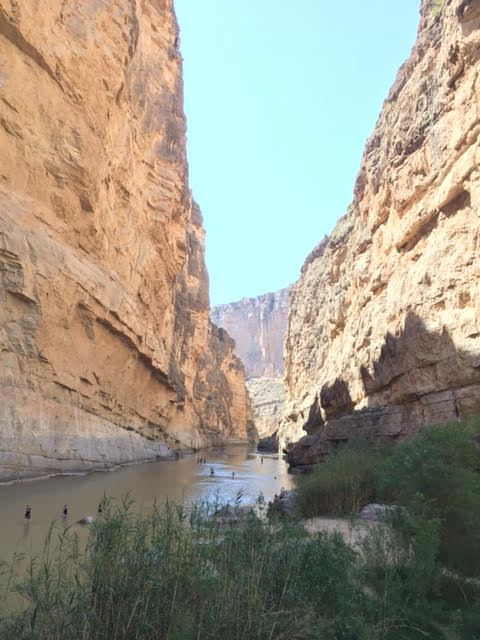 In the cool shadows of the canyon. 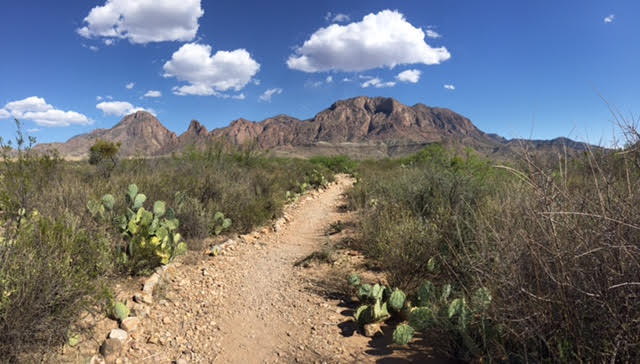 In the morning we explored the nearby nature trail which overlooked the Rio Grande (our campground was only a stone’s throw away). Along the way we noticed little collections of up to a dozen wire figures with price tags and a cash receptacle (laundry detergent bottle with a slit cut in it). We also spotted a gentleman walking from the trail across the river, into Mexico. Apparently he/someone comes over each morning and sets up his little “honor-system” market areas about the trail and comes back later in the day to collect. There were at least 5 of these stations. We didn’t purchase anything, but it was interesting to see! 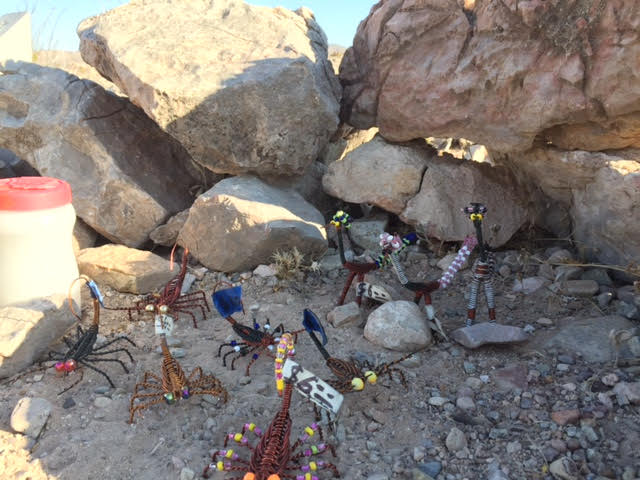 Matthew decided to brave the shin-high water of the Rio Grande and took a brief expedition over to Mexico. His trip won’t be reflected on his passport, but he enjoyed getting to be an alien for a few moments (which might confirm what many have previously suspected). 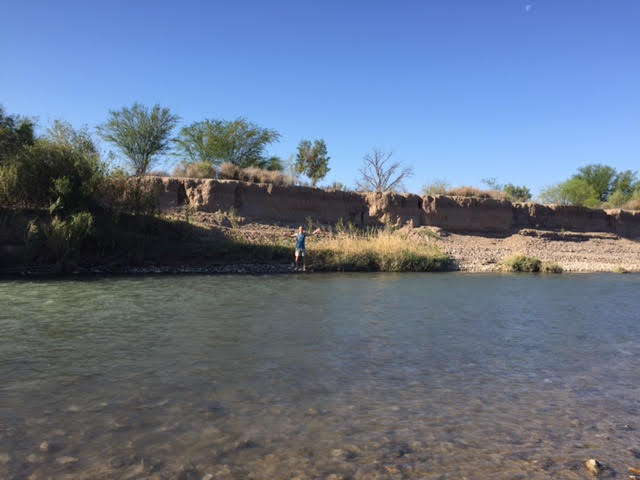 Trying to beat the heat, we hopped on our bicycles and headed toward Boquillas Canyon. It was a bit hillier of a ride than we expected, but it felt good to be back out on the bikes. The canyon wasn’t as grand as it’s big sister on the west side, but it was lovely following the Rio Grande into the canyon to the cooler temperatures inside its shade. 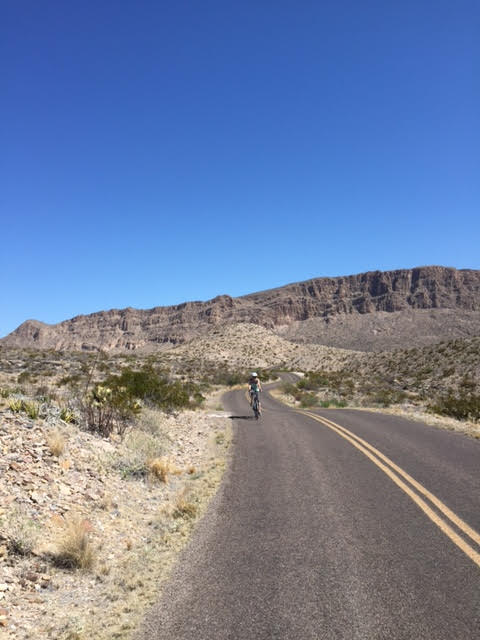 We tried to do like the Chihuahuan desert critters do and hide in the shade for the hottest part of the day, but even without physical exertion we just aren’t used to the upper 90s and the blazing sun! We felt like dusty old skeletons all dried up in the unrelenting sun. Did we mention that it was HOT! When evening rolled around and the sun finally started to let up we headed back up the road on the motorcycle to check out the nearby Hot Springs. It’s a natural spring (105 degrees) that emerges right next to the Rio Grande, so you can soak for a bit and then a quick dip in the river will cool you off. We enjoyed seeing it and exploring the petroglyphs (pictures carved into the rock) and pictographs (pictures drawn on the rock) but didn’t want to warm up any further so we passed on actually soaking in the Springs to prevent our bodies from melting in to a pile of mush 🙂 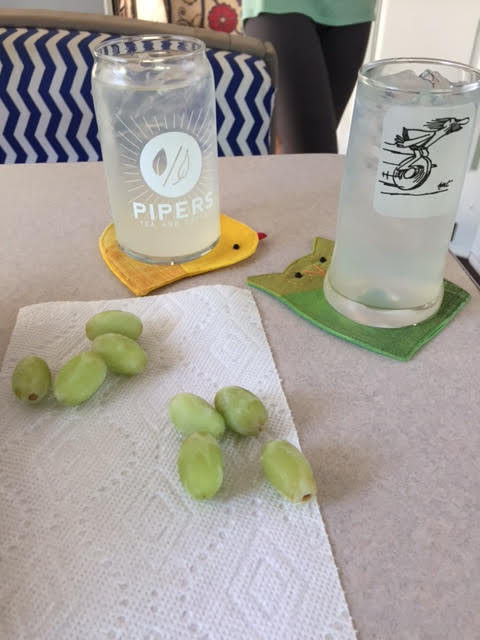 Who would’ve thought ice water and frozen grapes would be such a treat!

Sunday we headed up into the mountains for a day of hiking. On the one hand, the elevation makes for cooler temperatures. Even more appealing, at least for us, was the hiking trail that leads up to the highest point in the park, Emory Peak! It was a good hike that required some precarious rock scrambling at the end and we enjoyed lunch and the view together. 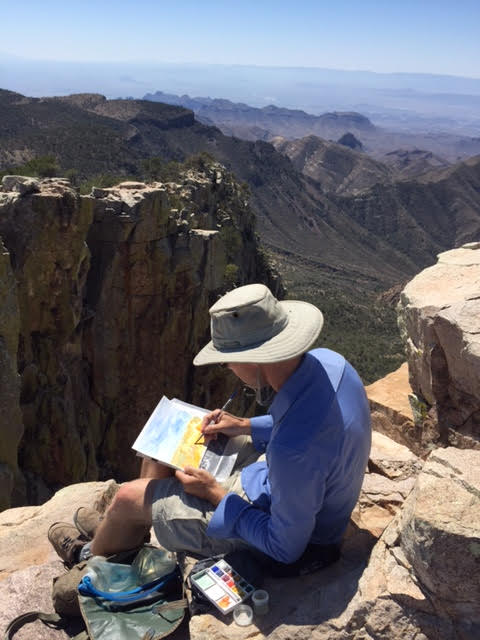 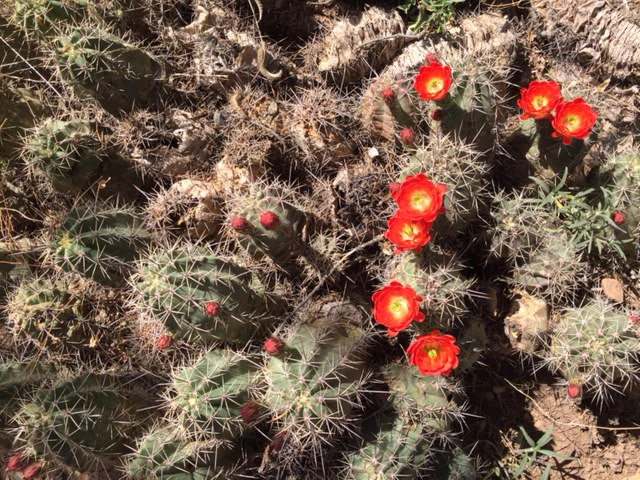 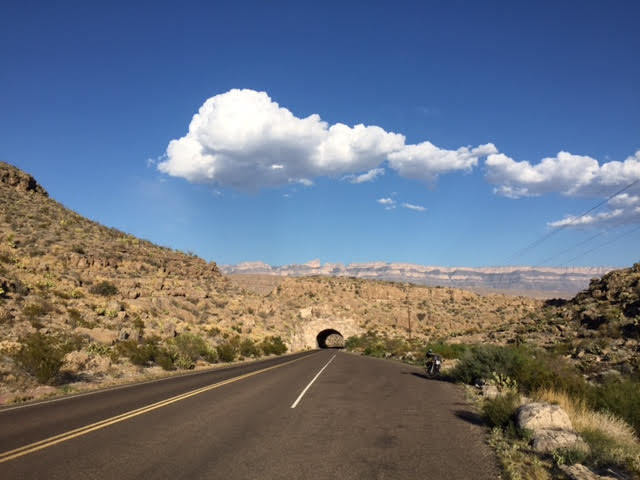 The road into the Rio Grand Village section of Big Bend.

Monday morning we packed up and headed on our way, aiming for our next destination, the nearby Guadalupe Mountains National Park! We found the last spot in the overflow campground and quickly settled in before heading out for a short hike up to the nearby historic ranch settlement and spring. Upon returning we chatted with our neighbors and realized that they’re not only from Kentucky but are from the same county that we hail from! What a small world… 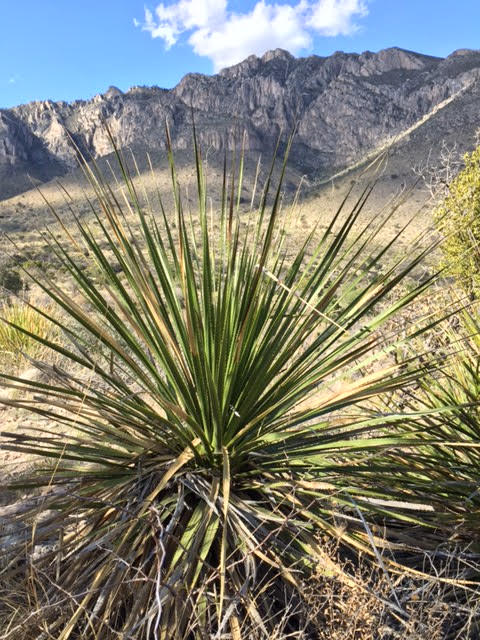 Sotol only grows in the Chihuahuan Desert 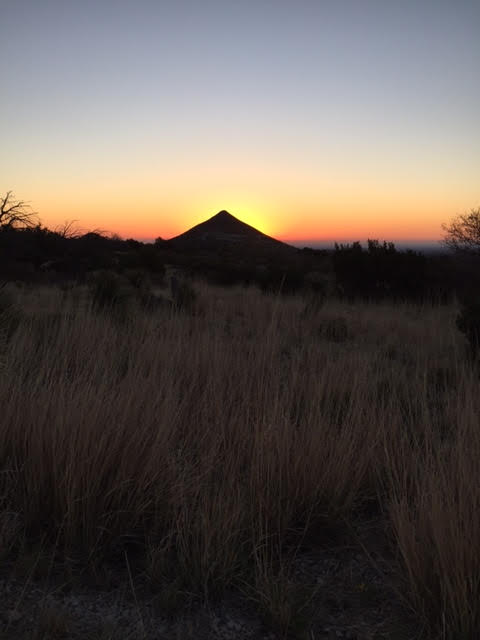 Early Tuesday we hit the trail, aiming for the tallest peak in the park, which also happens to be the highest point in Texas! Once again, we enjoyed our lunch while taking in the view from the top of Guadalupe Peak (8751 ft). 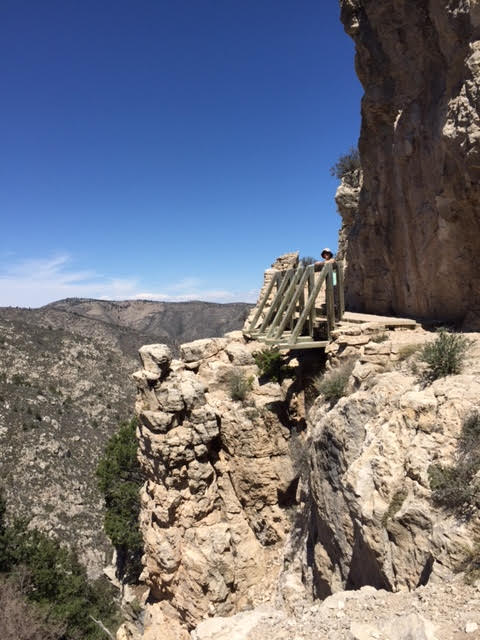 Bridge along the trail 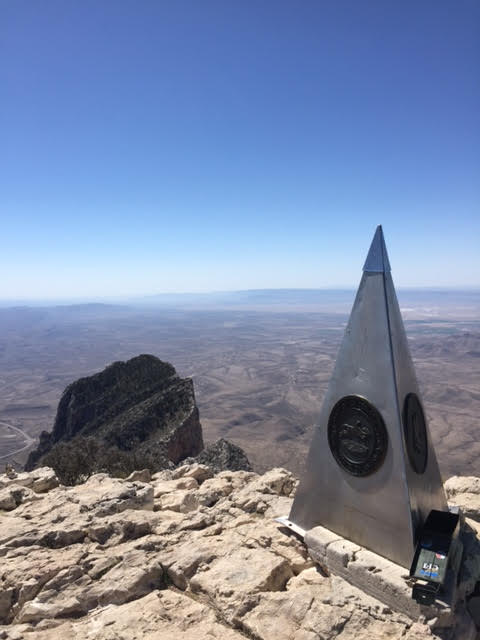 The highest point in Texas! 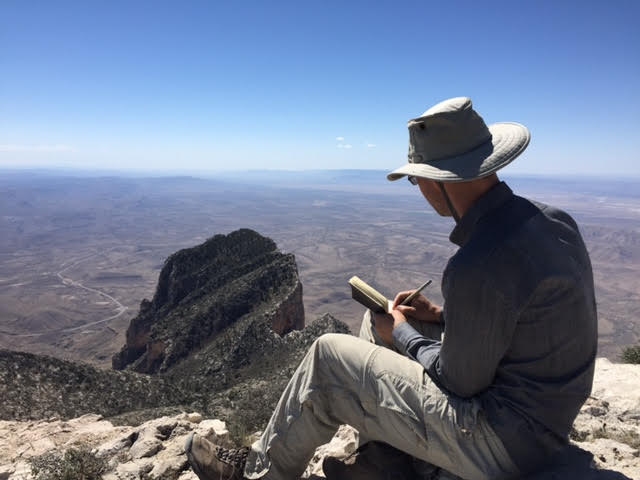 Drawing the back side of El Capitan from Guadalupe Peak 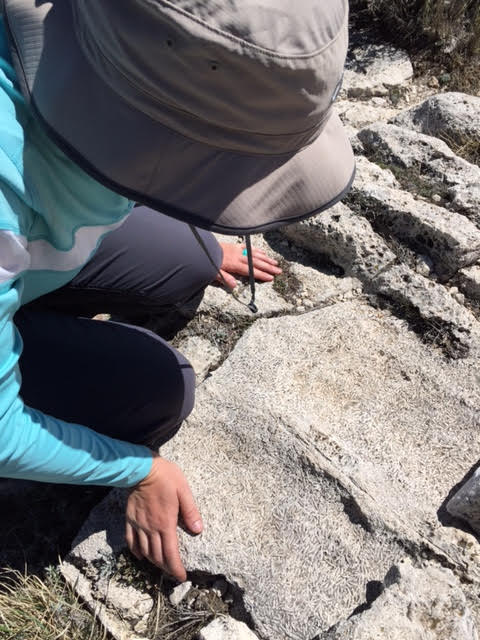 Wednesday morning we packed up and began to head out, but before leaving the park we stopped and hiked into McKittrick Canyon and visited the historic Pratt Cabin and the natural stone Grotto. 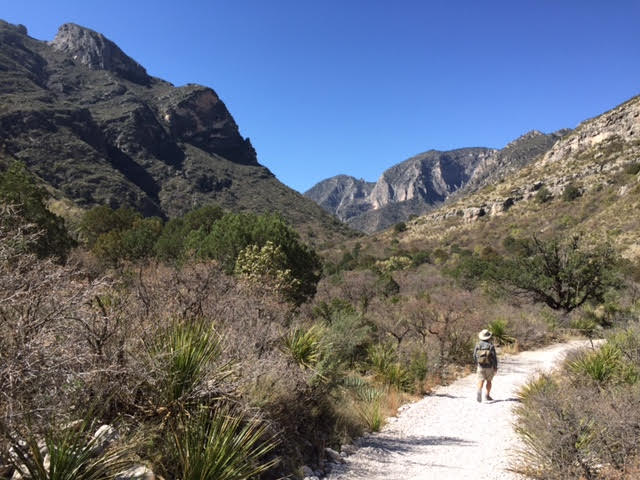 Hiking into the canyon 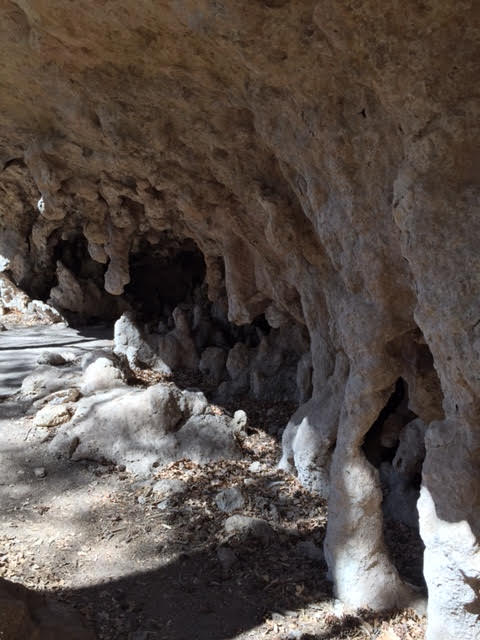 Since the next park was nearby, we headed on to Carlsbad Caverns and managed to get in a cave tour that evening. We really enjoyed the self-guided tour of the Big Room, providing the opportunity to walk at our own pace (which includes speeding up or slowing down to get out of any crowds). Our plan was to come back and watch the bats leaving the cave at sunset but after a false-start at finding a place to spend the night, didn’t end up making it. 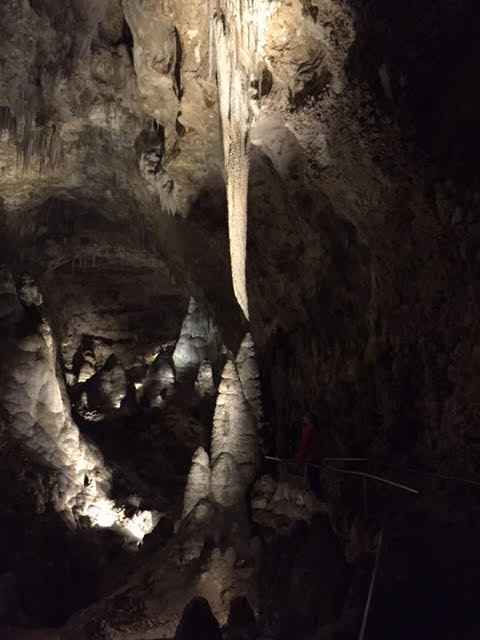 This morning, however, we were at the cave bright and early, before it was actually open. After enjoying breakfast we headed on in and were among the first to work our way down the Natural Entrance, which is the second self-guided tour. It felt like we practically had the cave to ourselves! It’s like a natural cathedral and we took the opportunity to just listen to the water droplets and study the intricate speleothems. Once inside the main chambers we re-traced our steps from yesterday, exploring the cave’s Big Room yet again. It’s an amazing place, different from any other cave system we’ve been in. Huge, with spectacular formations that are well presented by the Parks Service with dramatic lighting. If you’ve ever wondered what it would be like to wander along the surface of an alien planet – this might give you an idea. It was otherworldly. 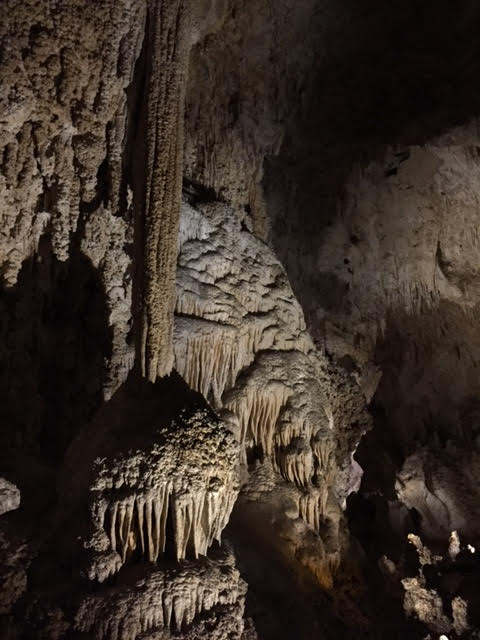 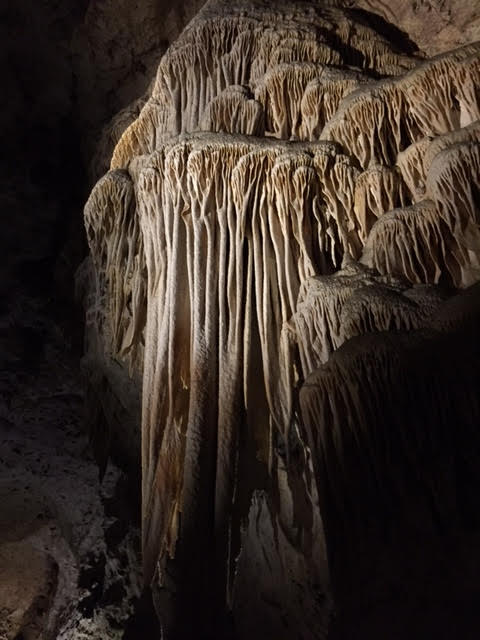 These draperies were at least 20′ tall!

After lunch we continued moseying along our way. The wind picked up with a vengeance (gusts of up to 70 mph!) and we stopped to wait it out, because driving a 30ft box in high winds can be nerve-racking, at least for Ashley. And her constant twitching and running back to make sure the motorcycle didn’t get blown off the trailer can be a bit distracting. A few hours later, though the wind was still blowing fiercely, we decided to continue on (because we’re impatient) albeit fairly slowly. We finally found a campground that looked good and have settled in for a couple of nights. At our higher elevation, the temperature is in a much more tolerable range and there are green trees and grass around us again! Horray for rest, a chance to catch up on household chores, and full utilities!

Out of breath and loving it,

One thought on “Mashley’s Adventures – Deserts, Mountains, and Caves”