Must have slept pretty well with the earplugs in – probably my best yet, actually. My big concern was missing the alarm but a) I was up just a few minutes before it went off and b) I pulled out one of my earplugs during the night, as I seem to tend to do. 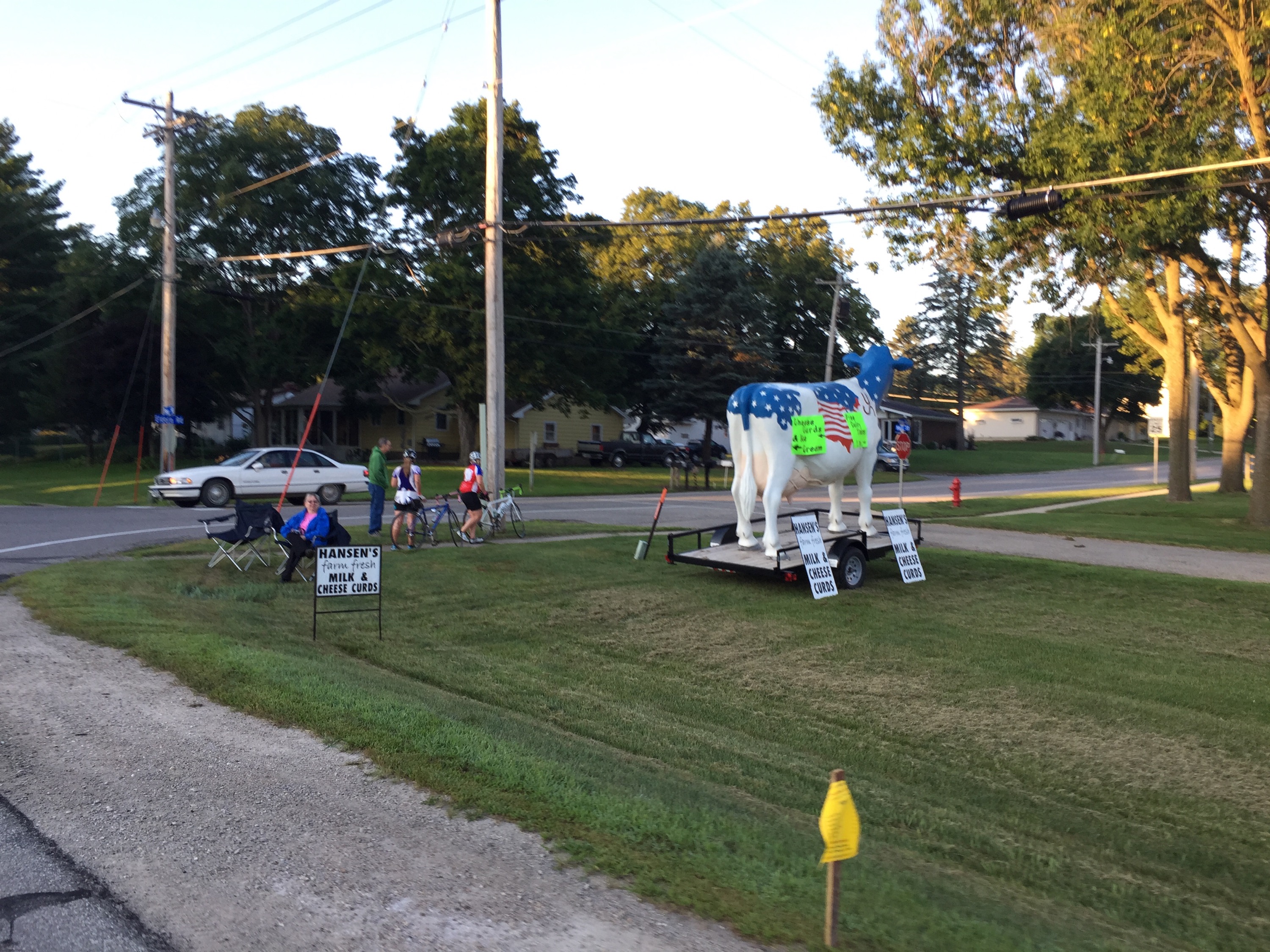 We packed our bags and hit the road about 6:00. Hudson was 8.2 miles away and we were ready for breakfast. Ashley got a tasty yogurt parfait and I went for the Chris Cakes again. Since you can get free refills she ate half of my second plate. We both went by the line and got free bacon,  nice and thick cut – basically ham slices and with excellent flavor! 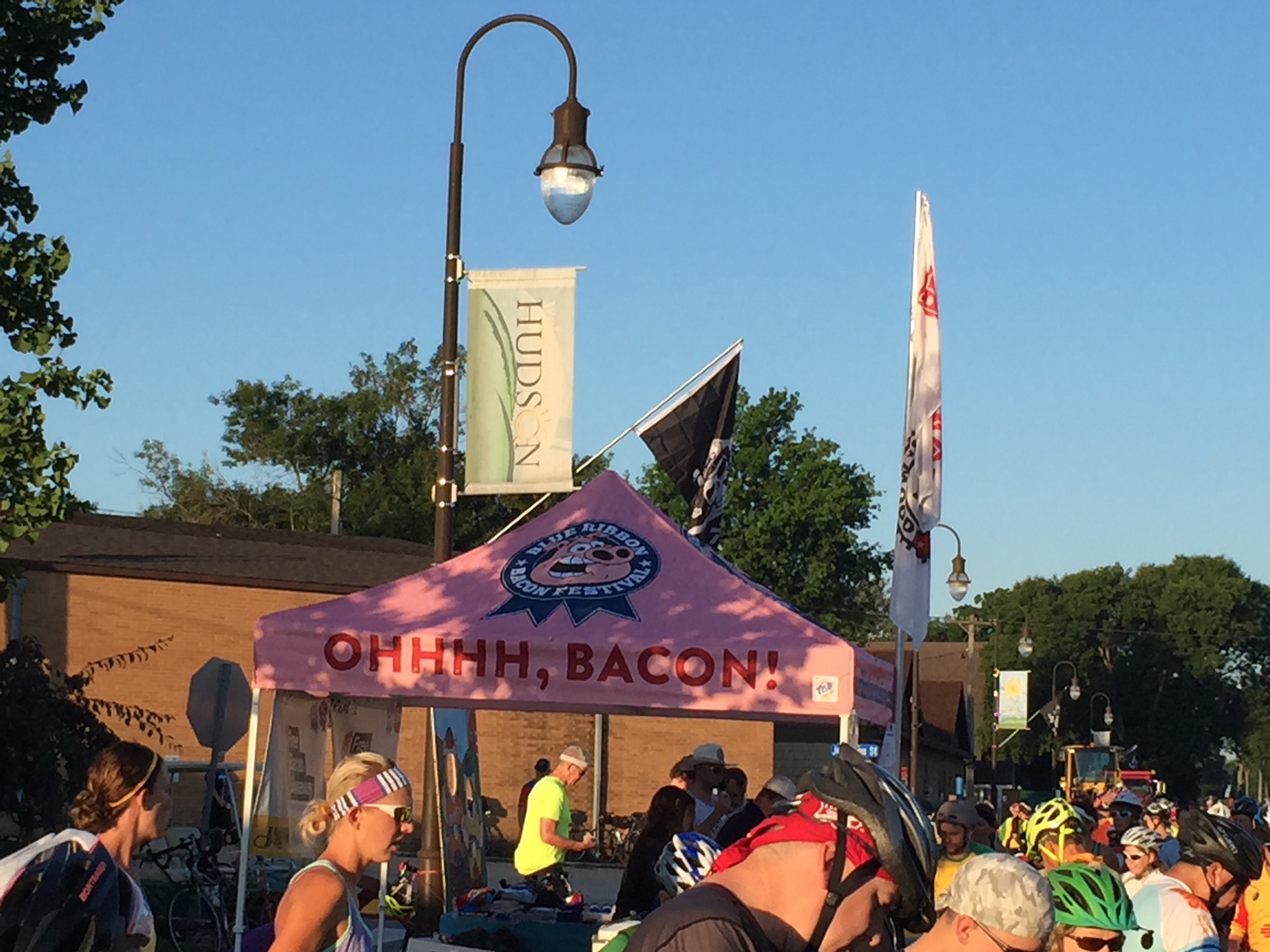 Before reaching LaPorte City (19.9 miles) we ran across Mr. Pork Chop. Apparently it’s a tradition to eat one of his chops but it always seems to be either too close to having eaten breakfast or lunch. We thought there would be a schedule so we could plan for tomorrow, but no such luck. Chops do look good, though, even if we might have to split one. 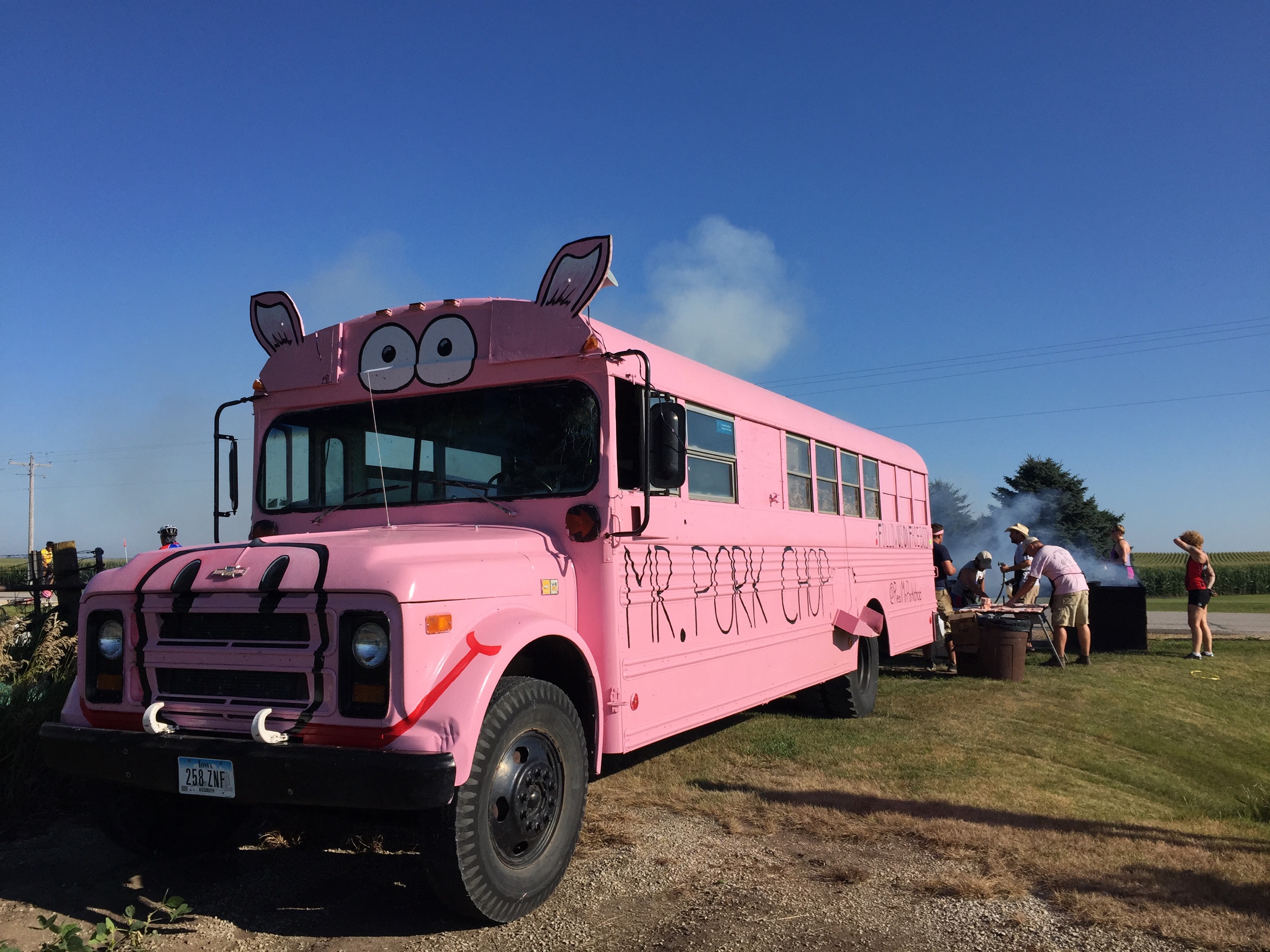 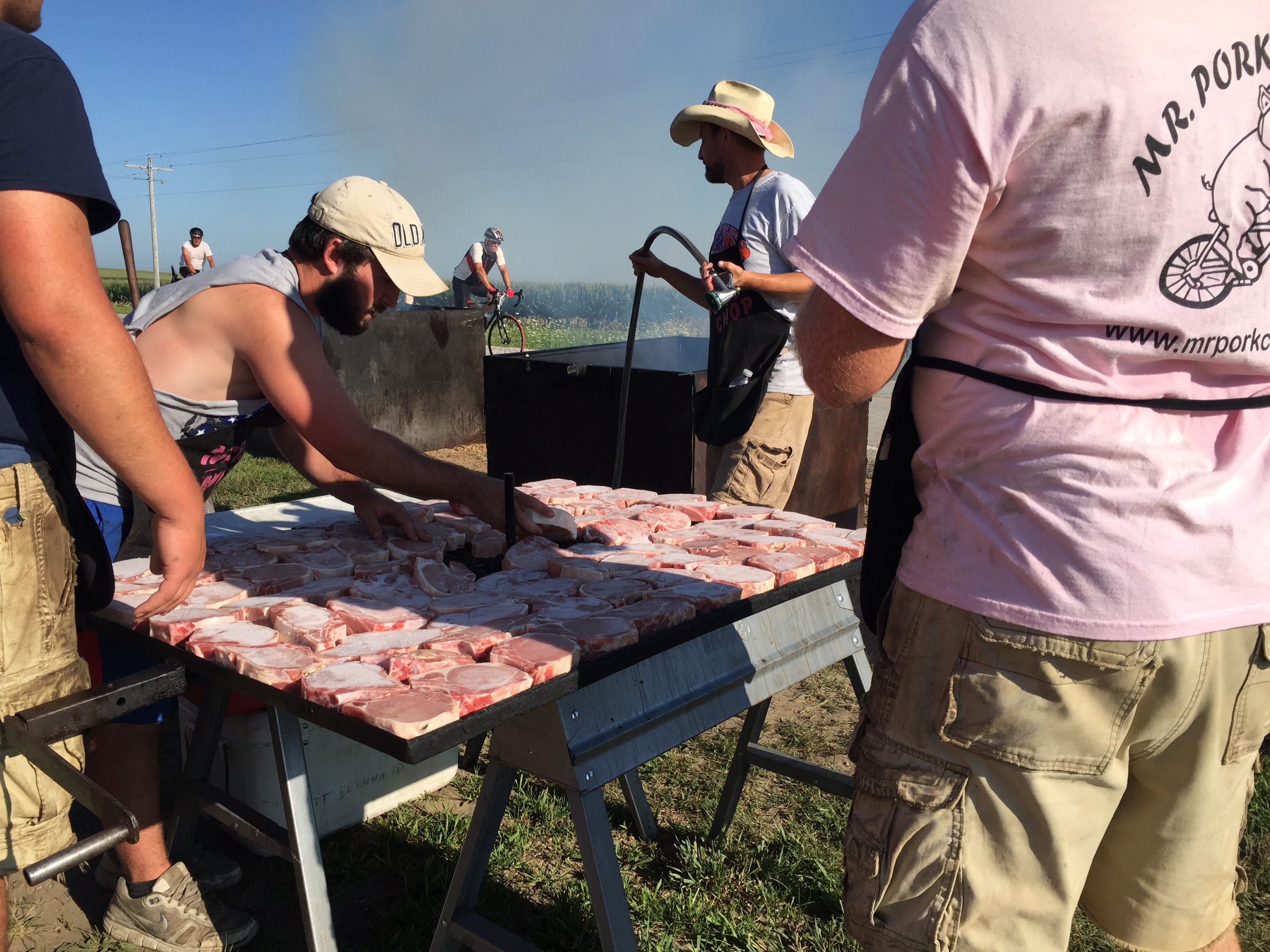 In LaPorte we slowed for photos and a Cliff Bar. 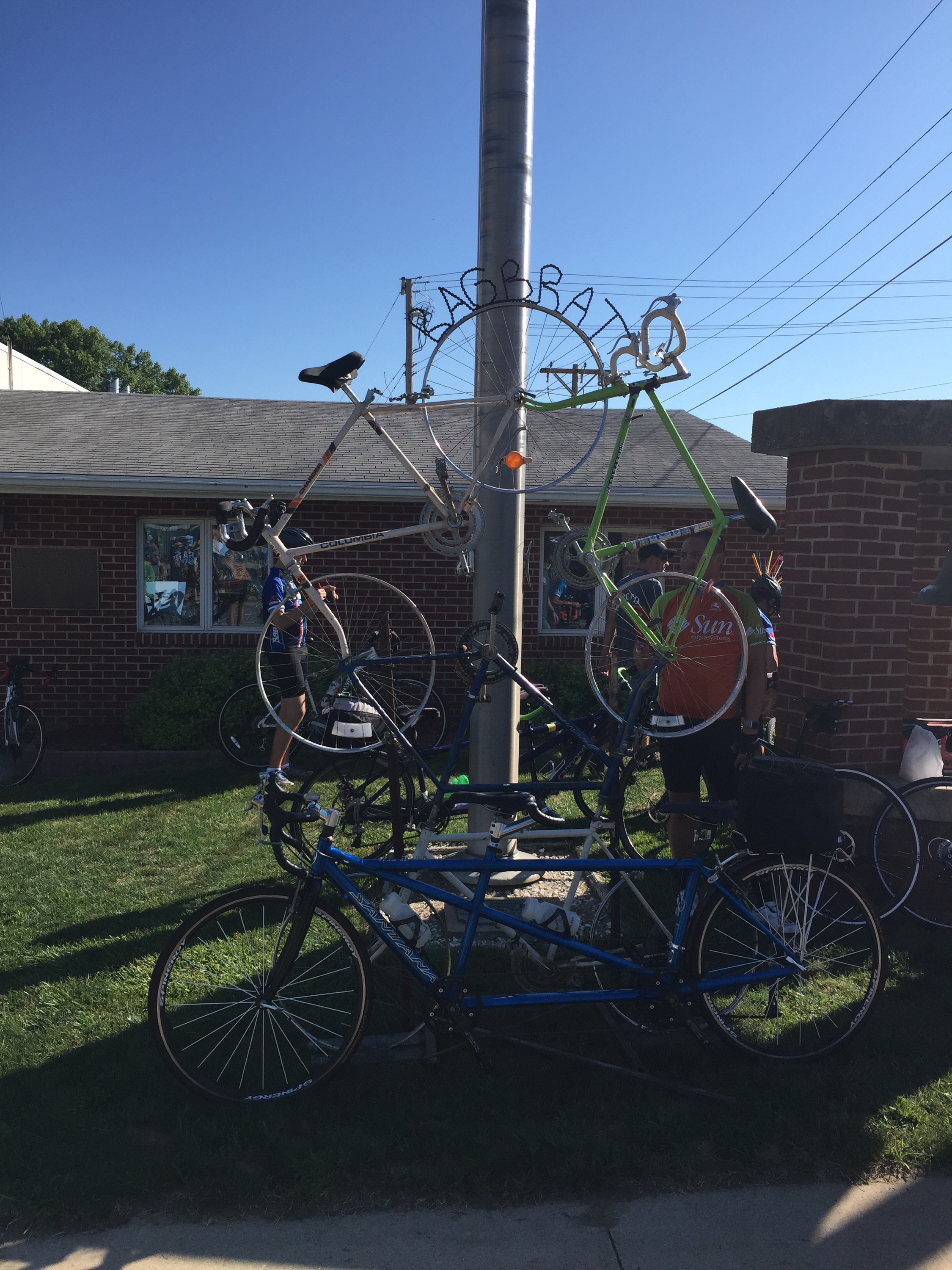 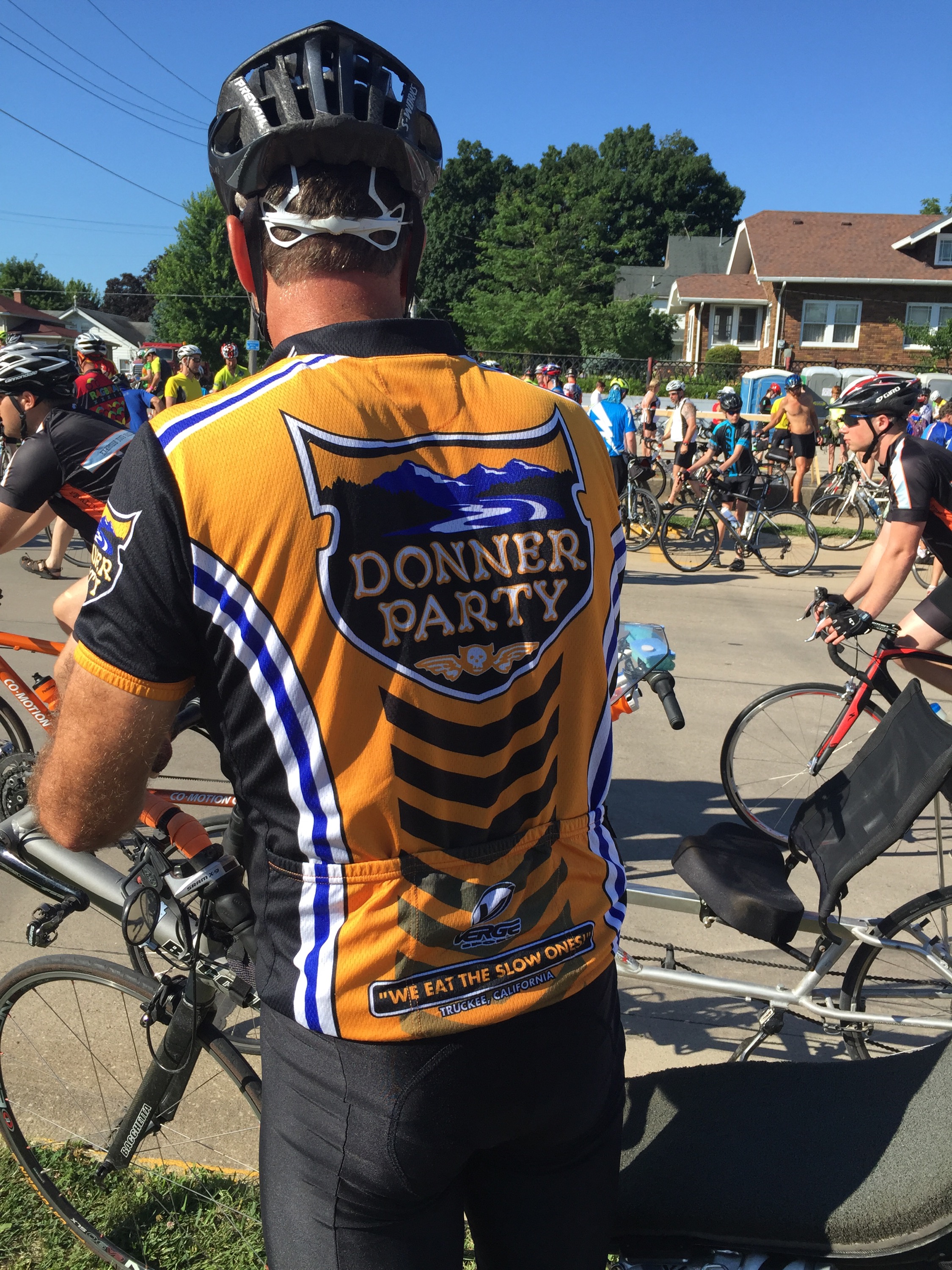 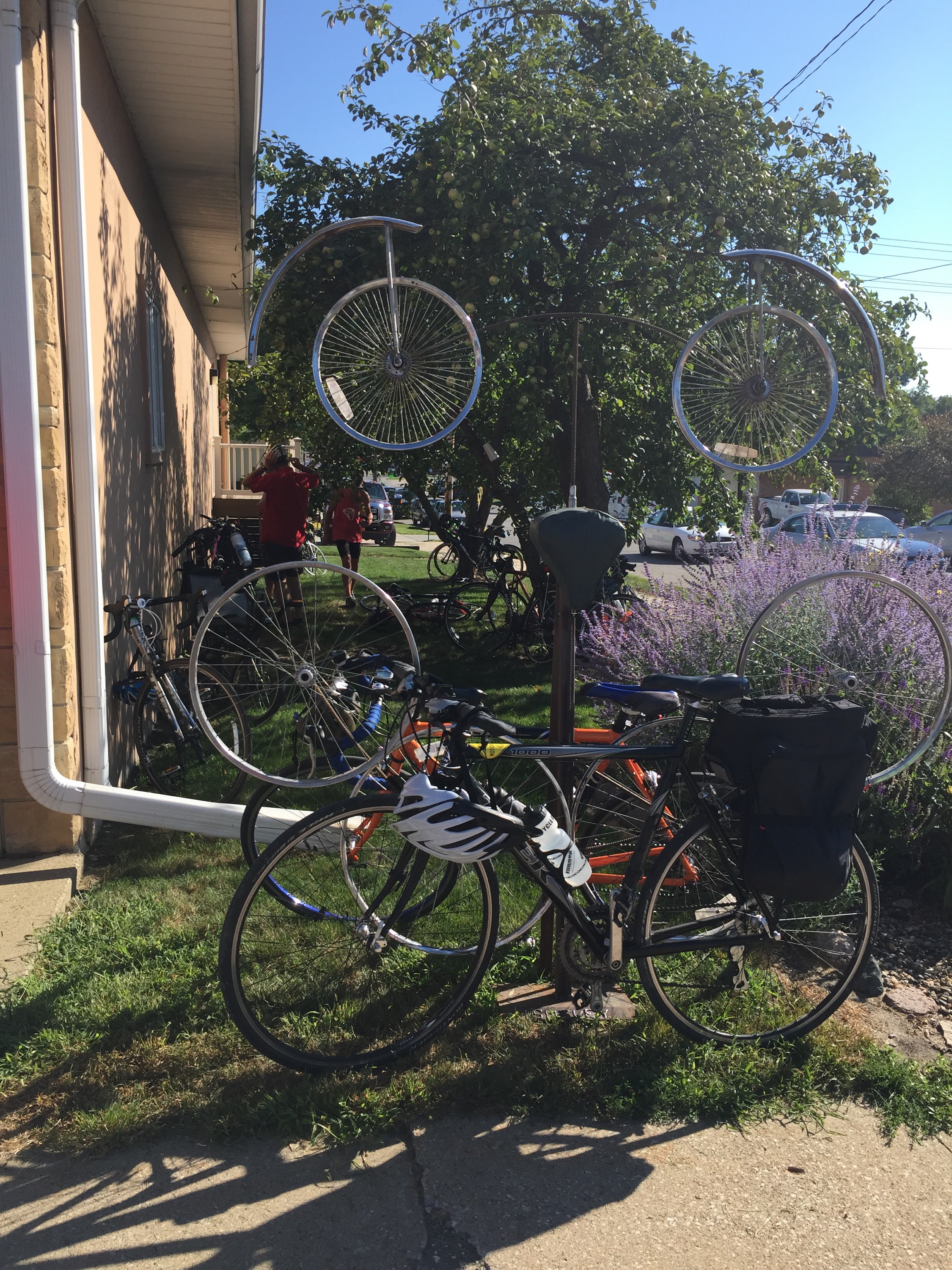 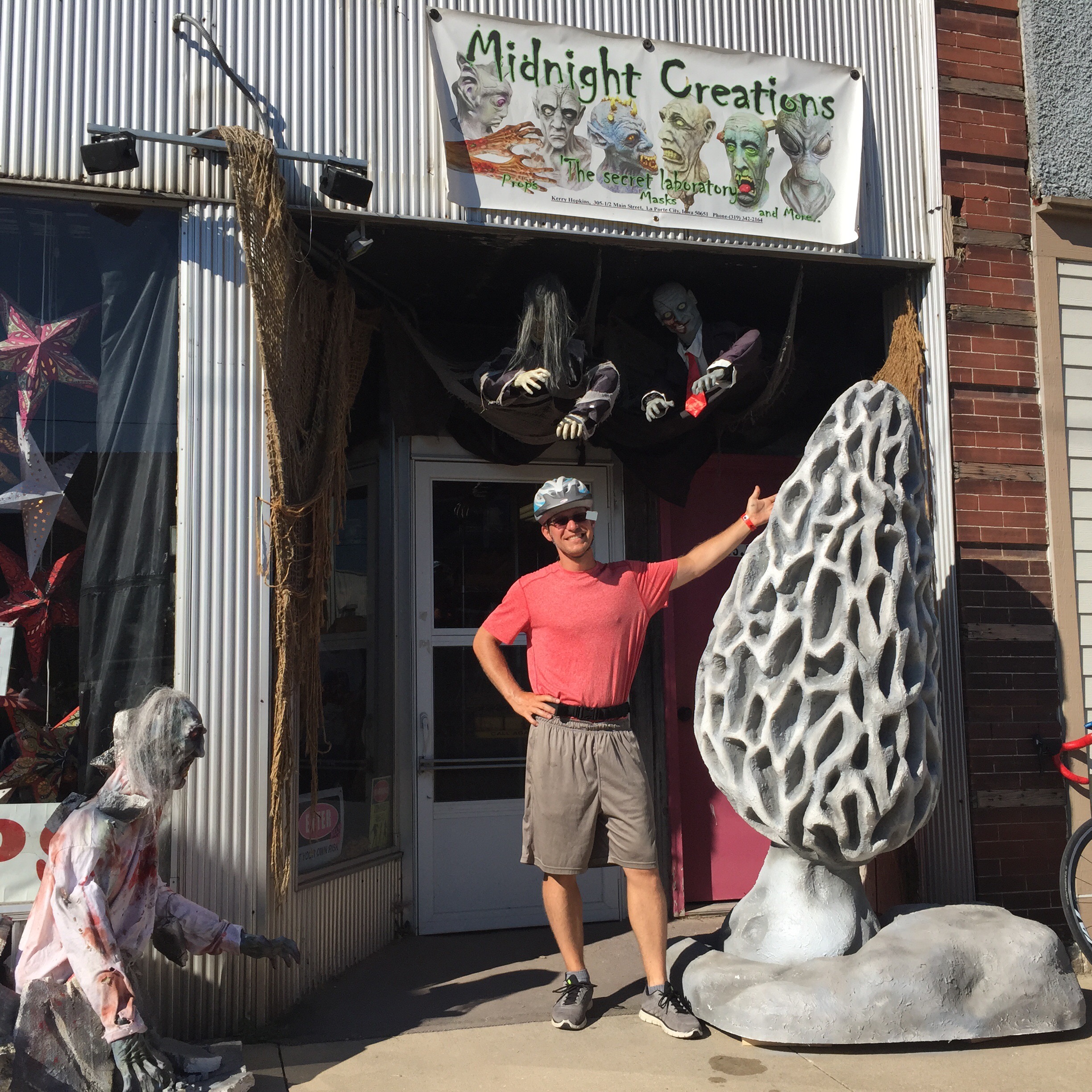 Then headed on to Mt. Auburn, 10 miles further. Cute little town where we snagged some more photos before meandering along. 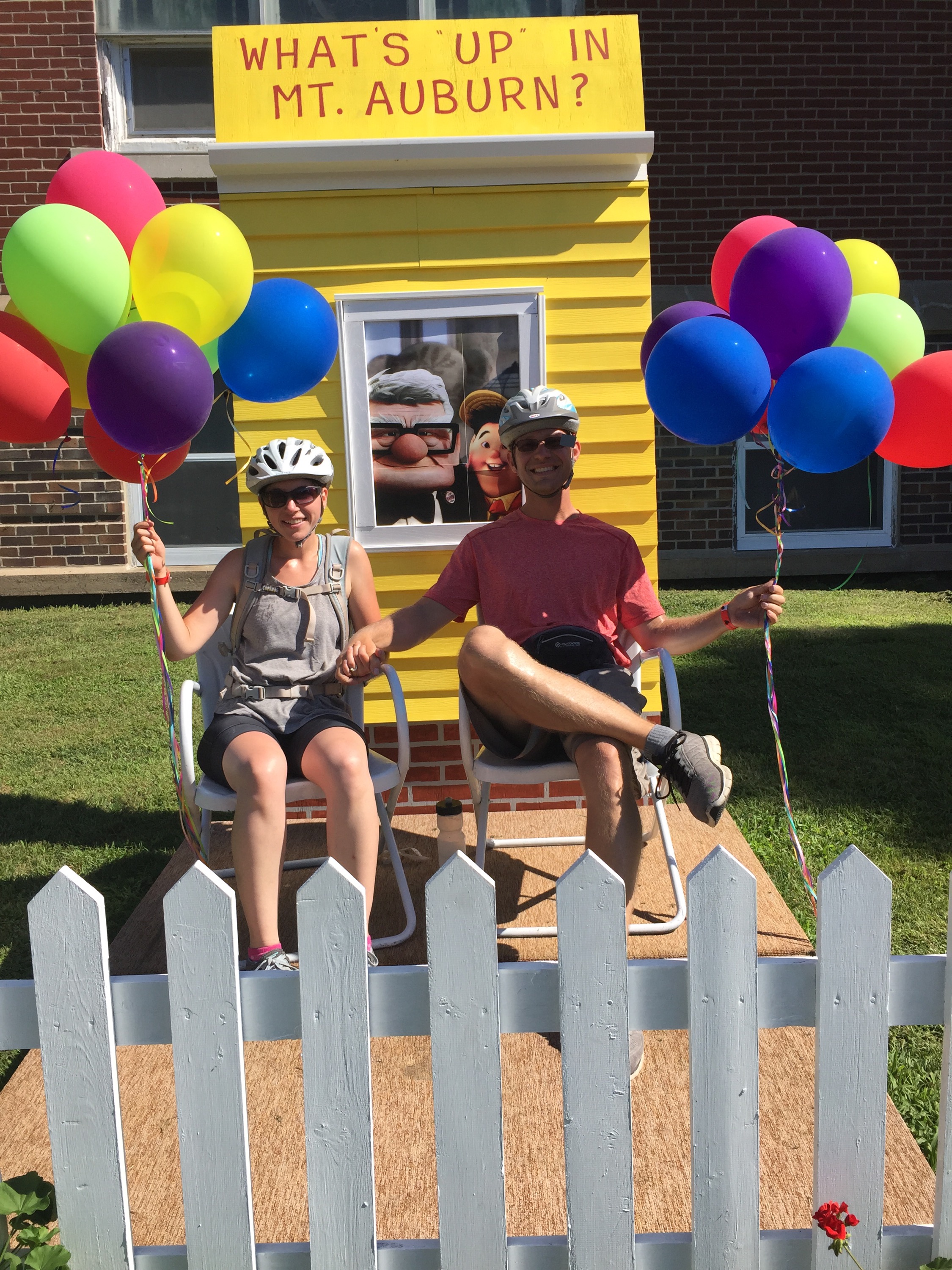 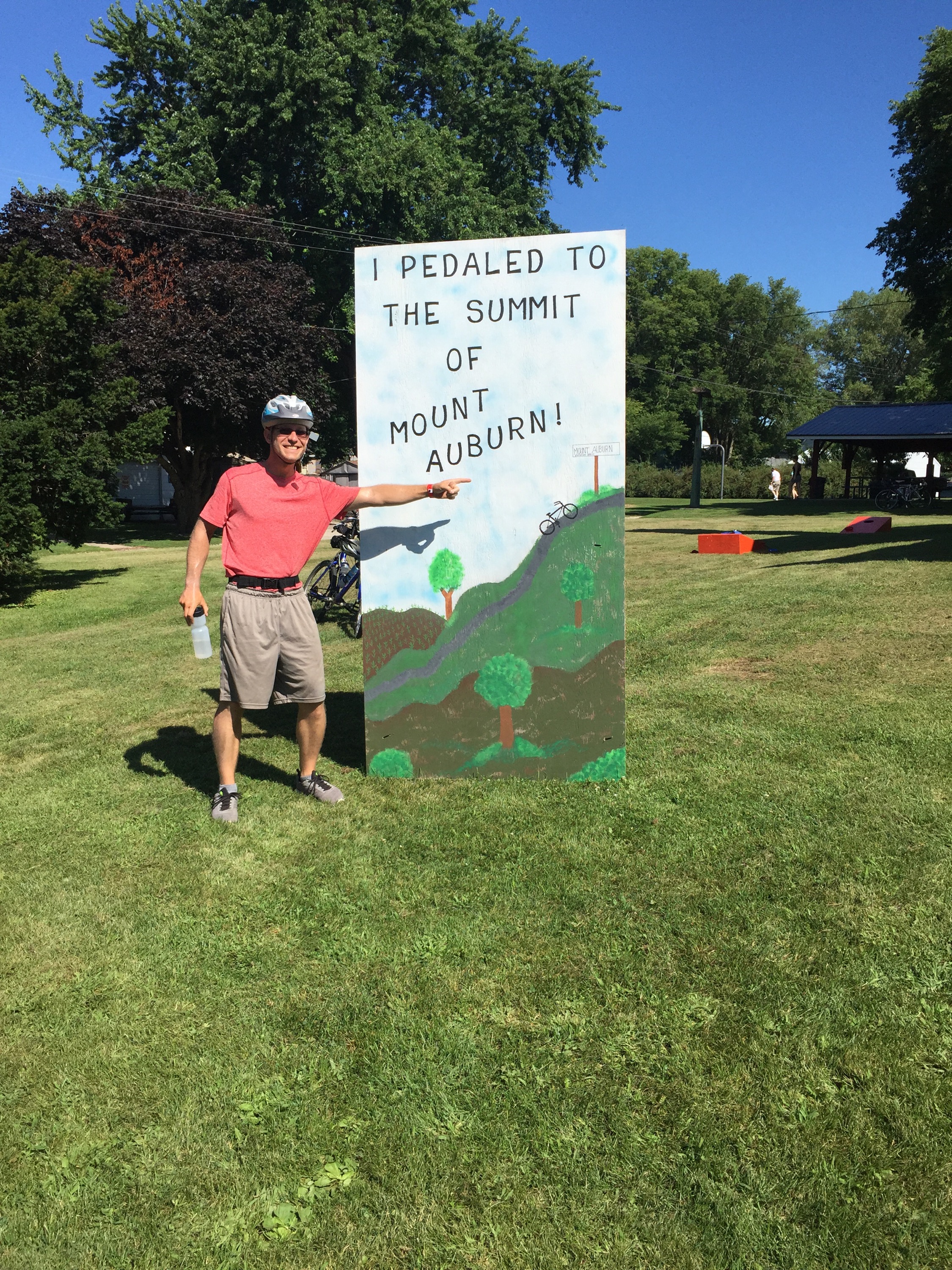 Vinton, today’s meeting town, was 8.3 miles further. We spotted a BLT booth that sounded great so we both got some wraps with Avacado in it. Never thought of a BLT wrap but it worked really well! 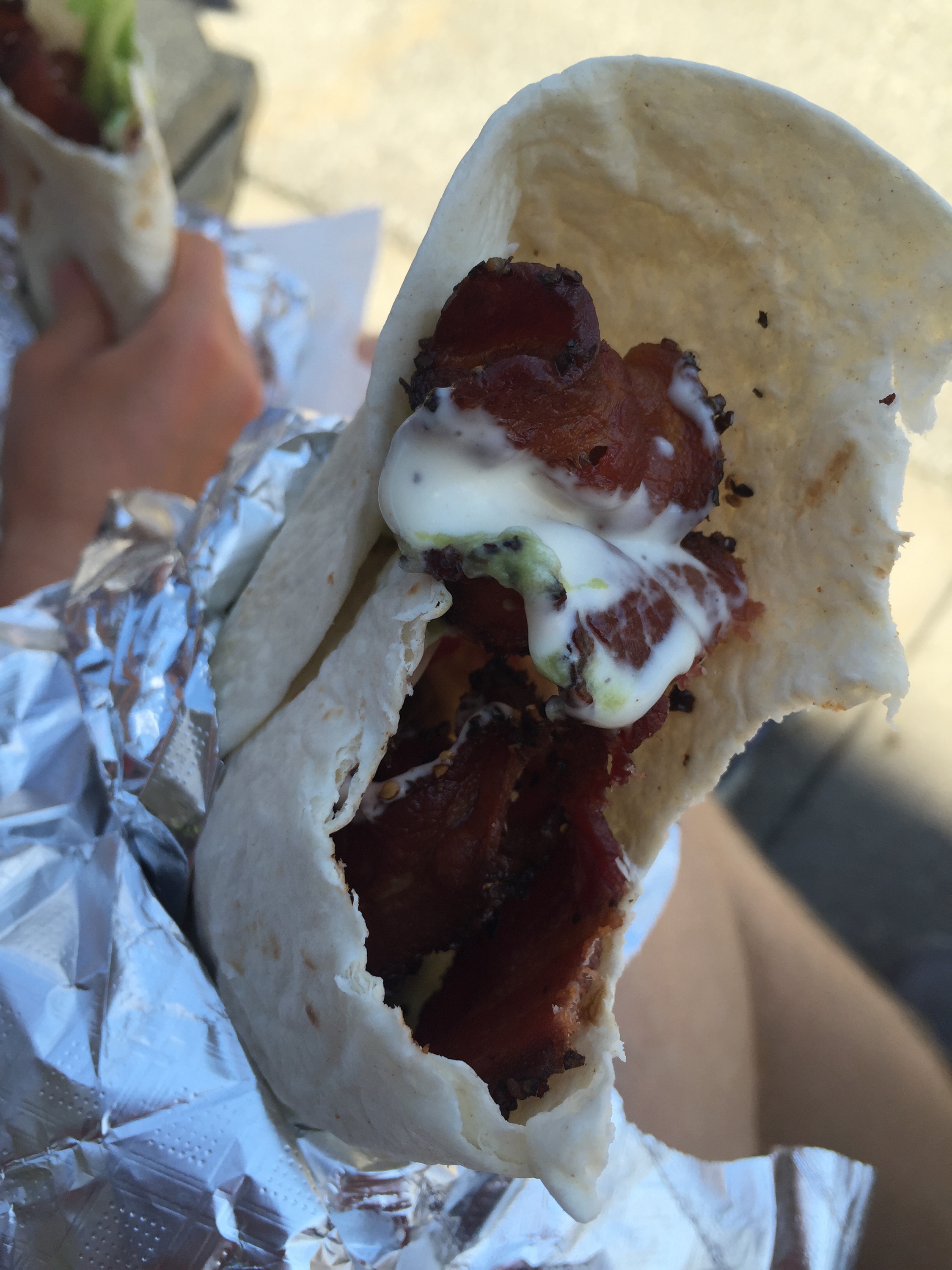 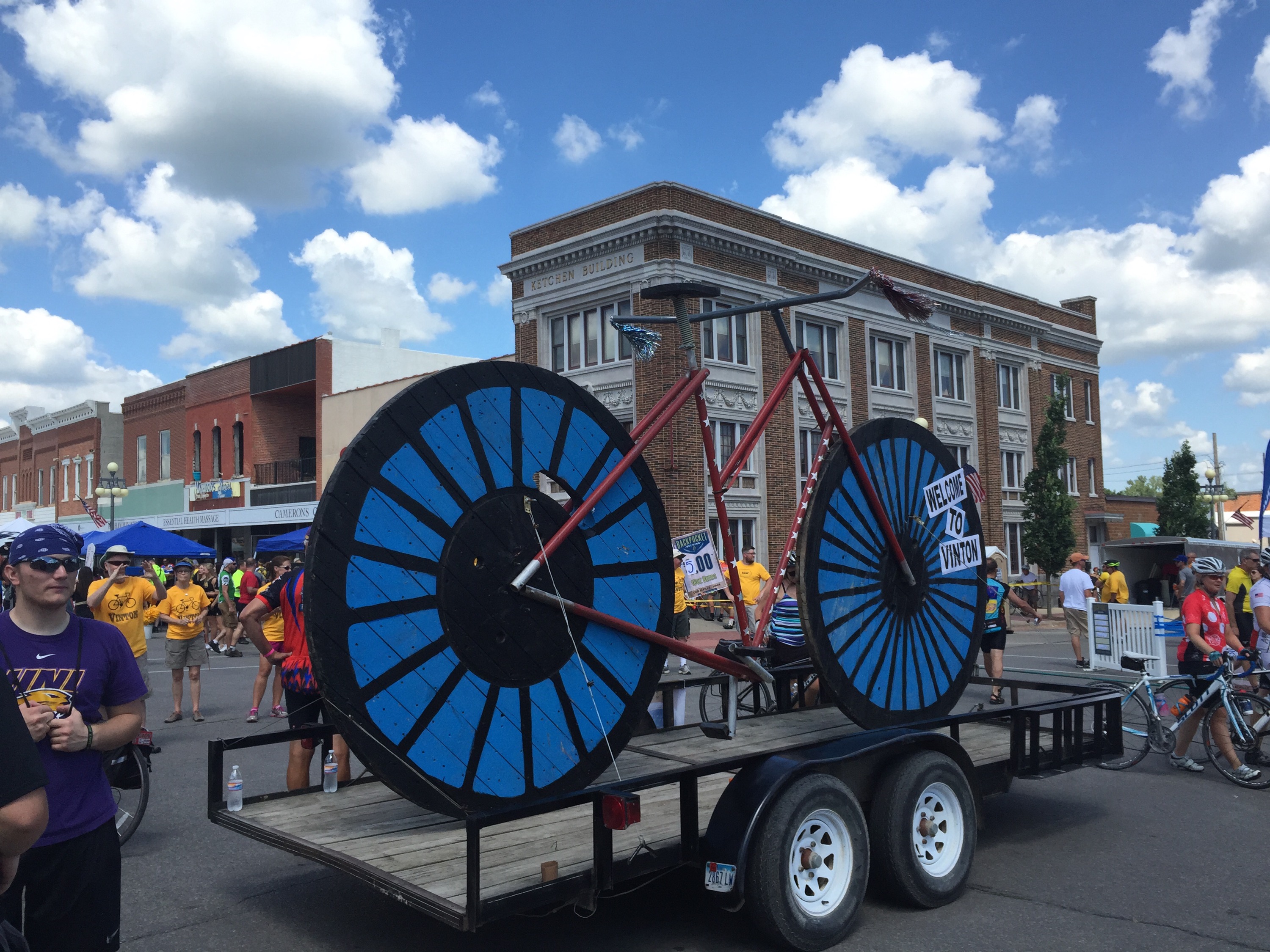 Shellsburg, the next town, 11.3 miles further, was celebrating the 100 year anniversary of it’s bridge across the river. We came in too late to get any cake but enjoyed a nice break and lay down for a few minutes. 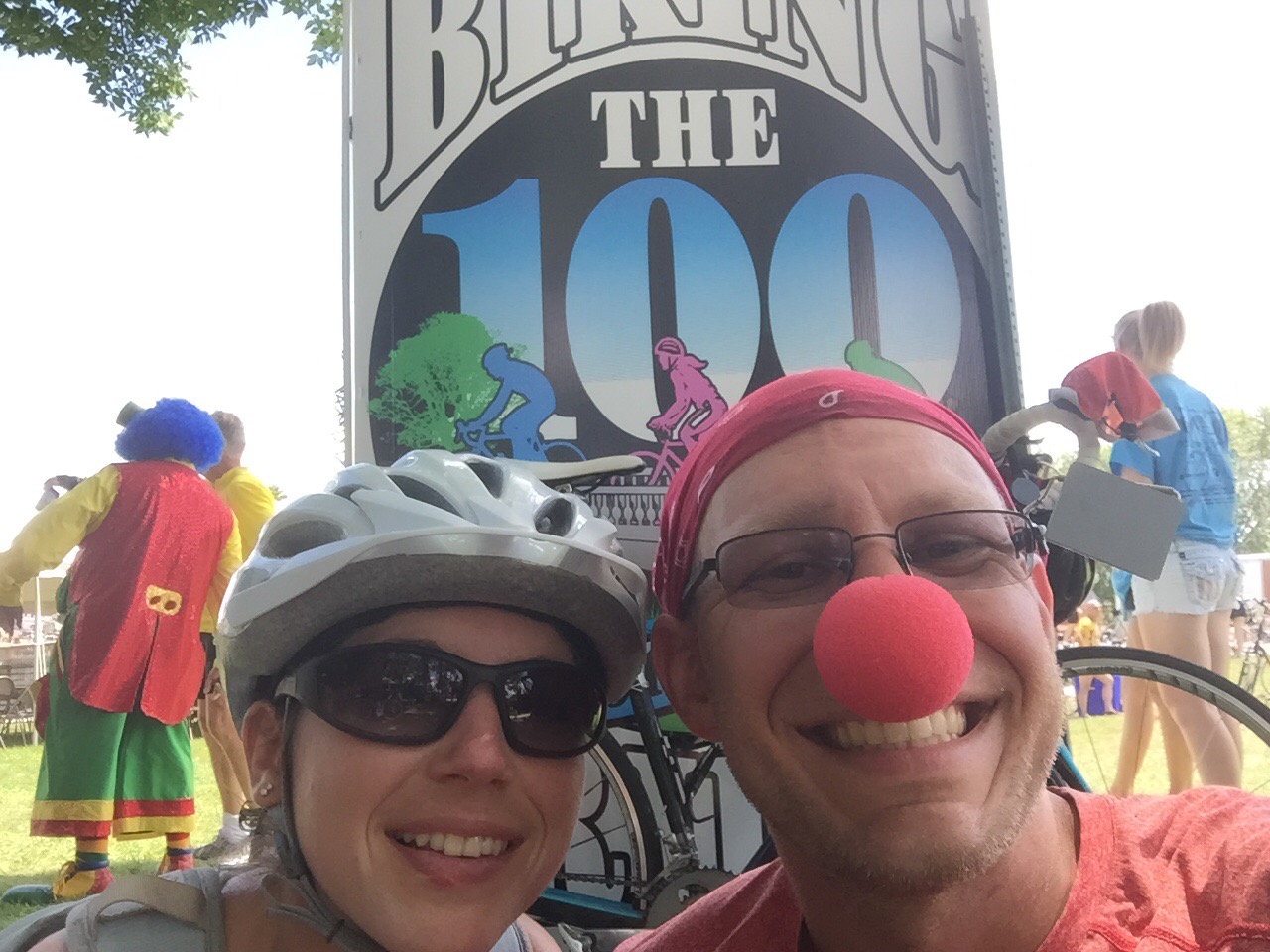 Before too long we headed in to Palo, 5.7 more miles. We stopped in for a bag of frozen grapes and a spot of shade. Frozn grapes were a delight – they will make a great snack in the RV as well. We’re ready to be done for the day, though, so we move along. Tired and a bit hot, we are out of energy and ready to stop. 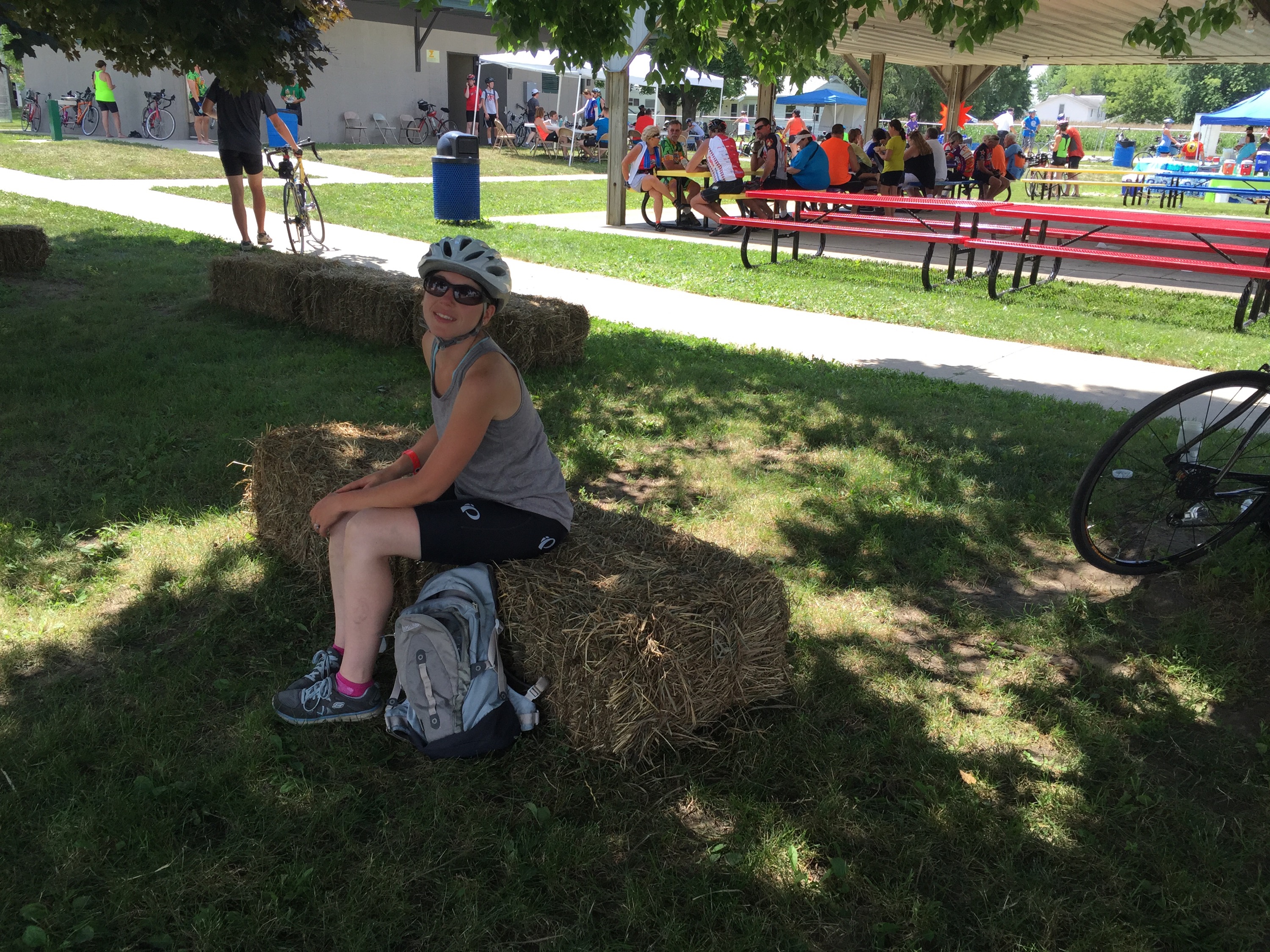 Hiawatha is 7.5 miles away, for a total of 70.9 miles and 2,377 feet of climb. Arriving in town we stop for free shaved ice. It really hit the spot in the heat. We sat in the shade and chatted with Tom who had a stroke a few years ago and now rides 200 miles a week but struggles to speak (but can sing. He sang a line of Amazing Grace for us.)

We headed in, set up camp in the sun and grabbed showers. I used the water faucet and Ashley hit up the shower trucks. I moved to the shade while waiting and ran into Scott. 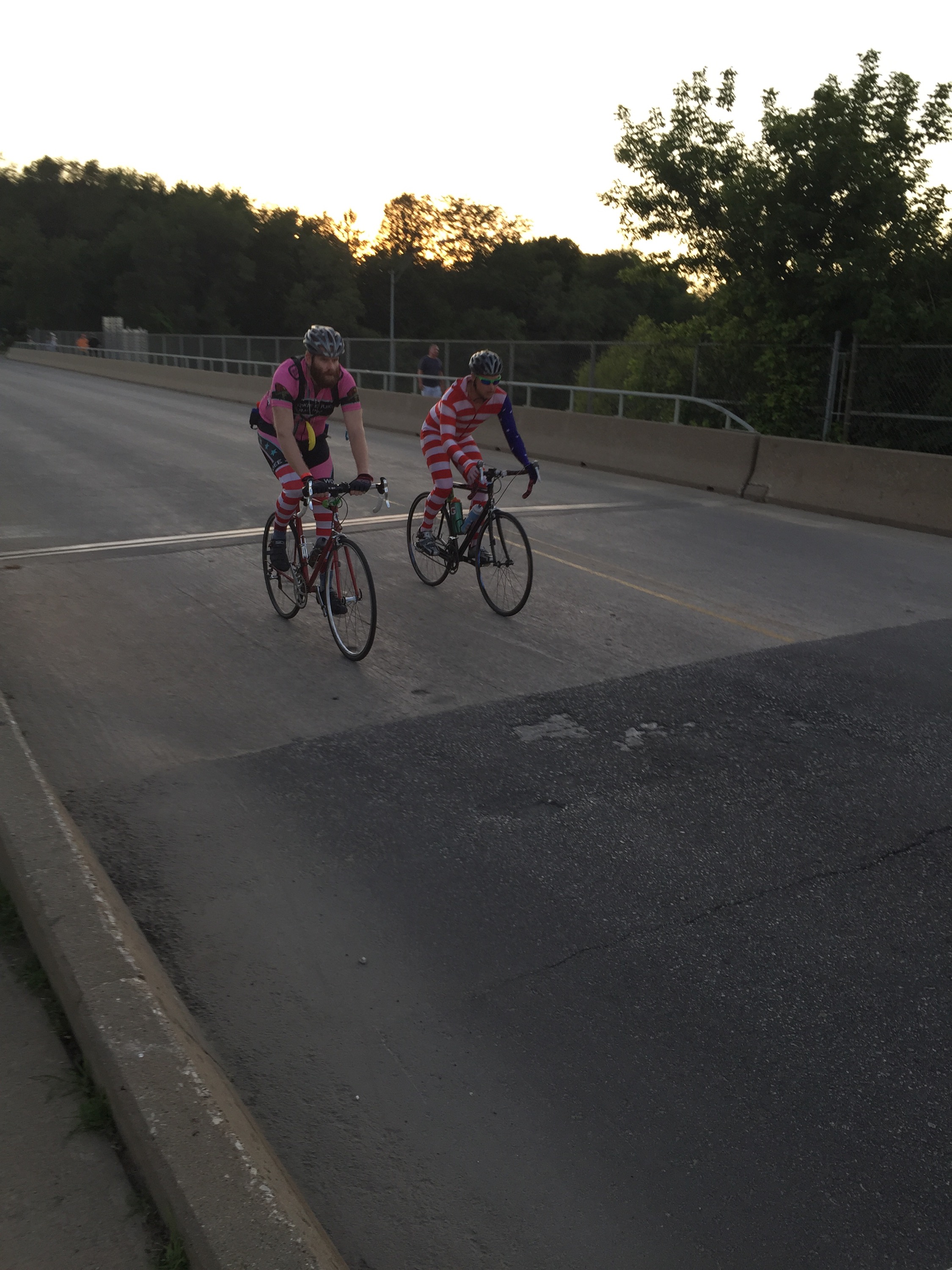 Ashley got back and three of us went and found supper among the food trucks and then walked down to Walmart. I grabbed strawberries and Rolos for dessert. Darn tasty! We also picked up bananas for tomorrow’s breakfast.

Wrapping up, Ashley headed back to the tent to rest while Scott and I searched out the library. We plugged in to charge and use the wifi while enjoying the water and poweraid they were giving away. They closed just as I finished and before Scott was done so I headed on back to get ready for tomorrow while he scouted out another location to wrap up working.

As I got back a drunk couple began setting up right next to us. Other than fearing that they would fall on us (and they have already sat on our tent) it is sadly humorous.