What a full day! We woke in the national forest and got ready for the day, then headed out. It was nice to have all the curtains open and see greenery surrounding us. 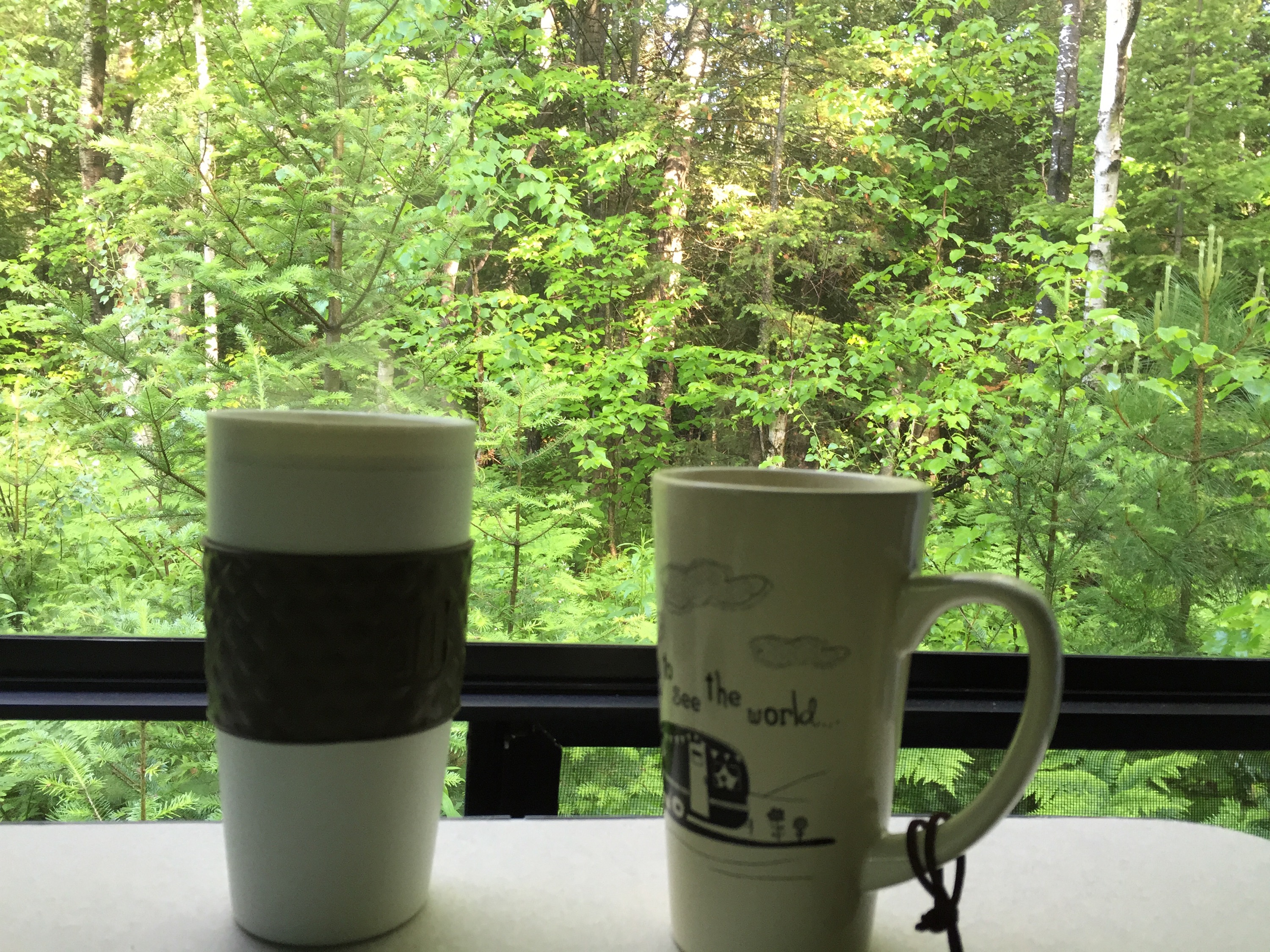 A few miles down the road were a couple of highlights that sounded interesting – worth the hike. We drove to their parking lot and hiked up to St. Peter’s Dome and Morgan Falls. The dome allowed us to see Lake Superior and the Apostle Islands, some 20 miles away. 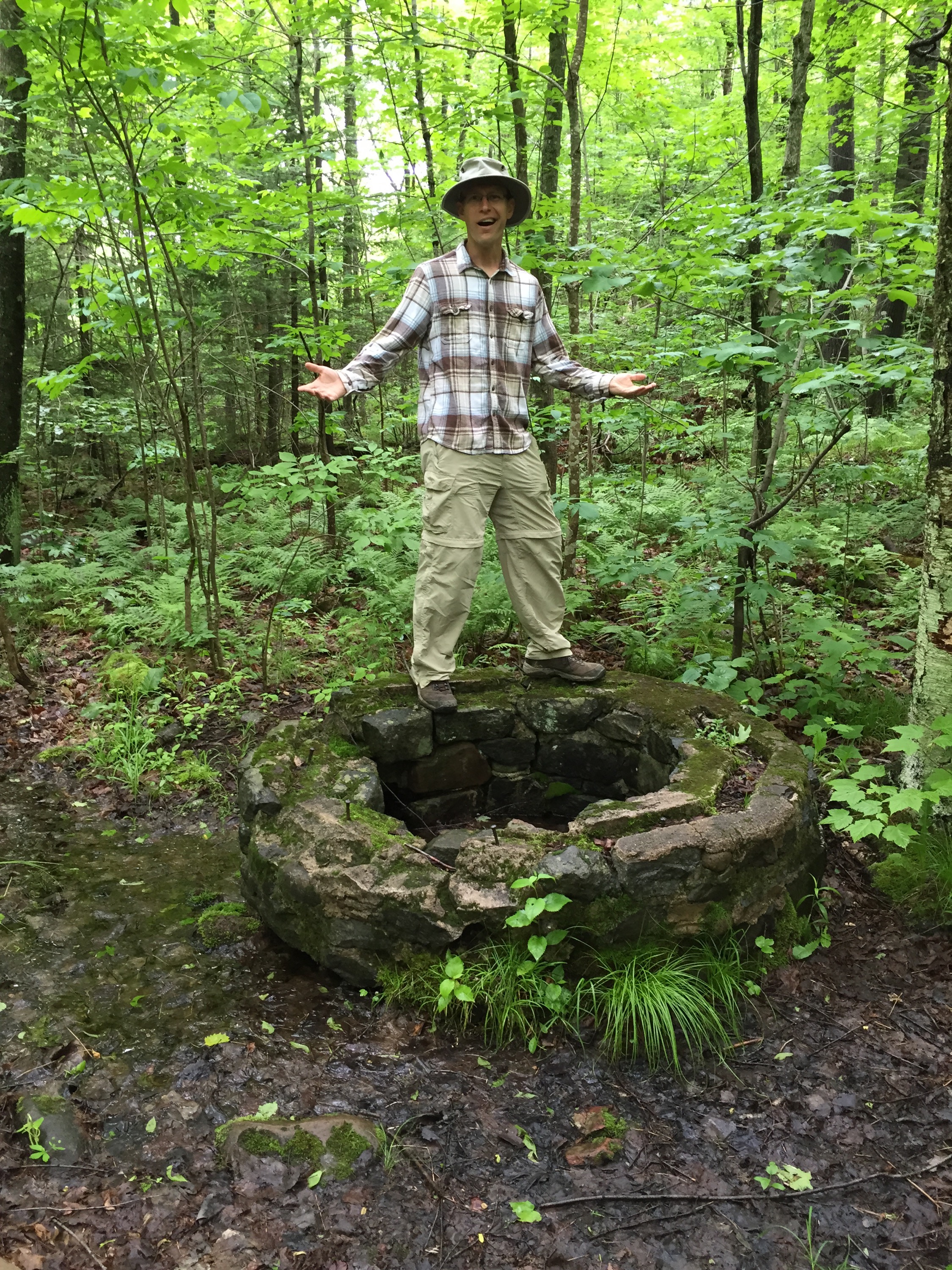 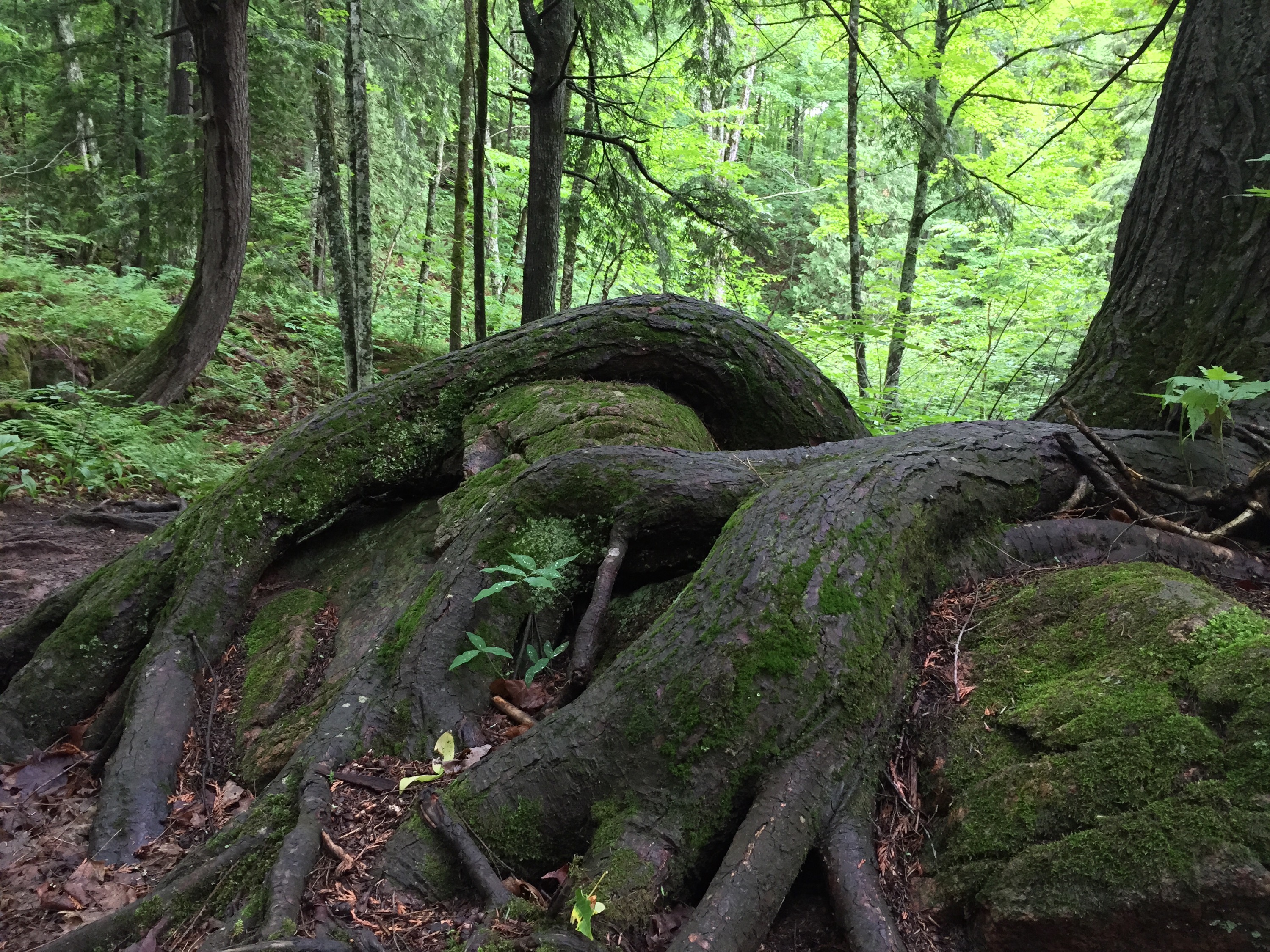 On the way back down we took the side trail to visit Morgan Falls, a beautiful little waterfall stair-stepping its way down the cliff face. The guide book says the best time to visit is in the spring or just after a rain. We must have timed it perfectly after yesterday because it was flowing very well! Apparently that is Wisconsin’s second highest fall at 70 feet. 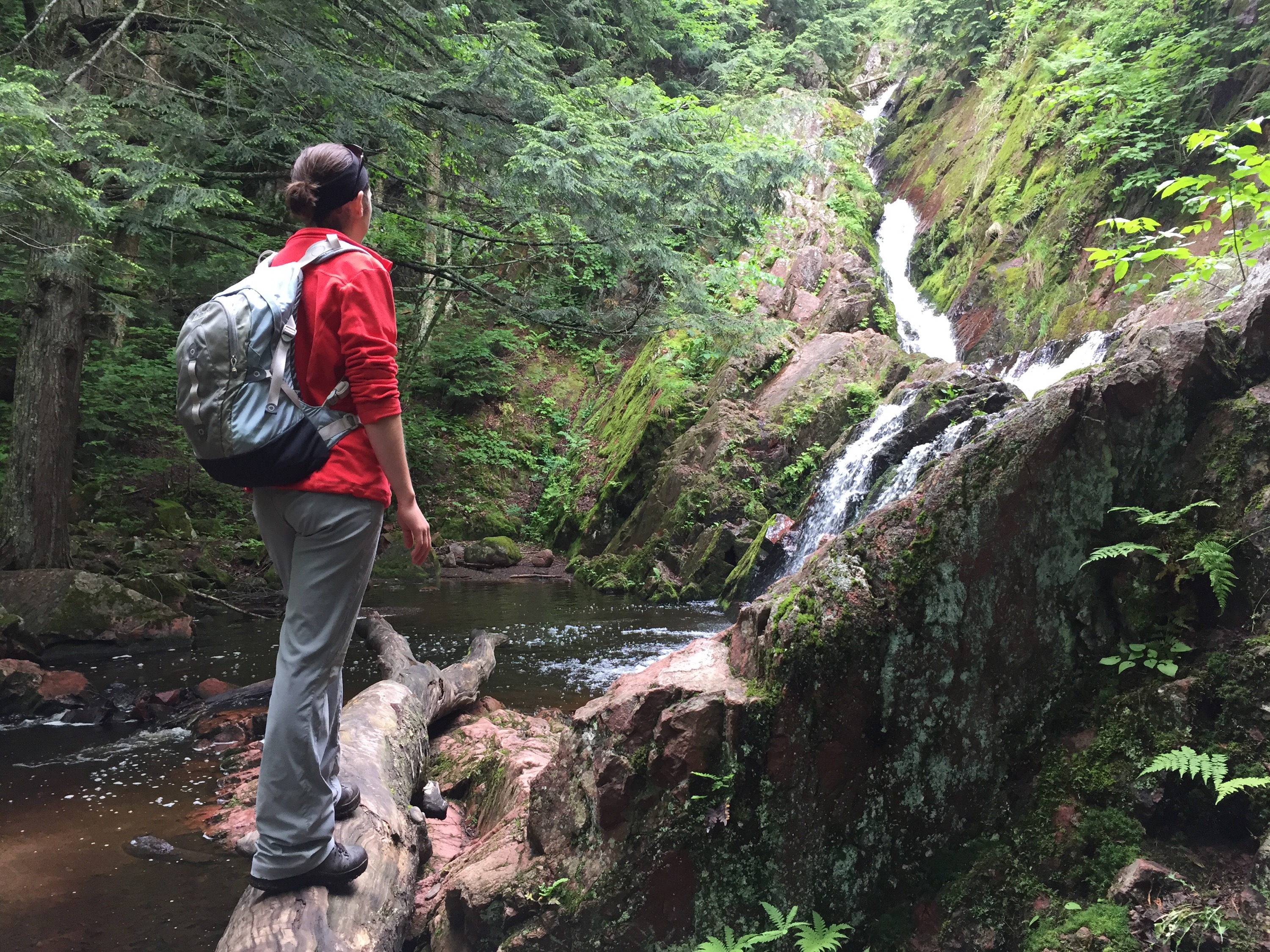 Next we headed out of the forest, and away from gravel roads, to the town of Ashland. Arriving in town we were both hungry and began looking for a place to eat. We spotted signs for both a bike trail and a city park so we pulled in. After a quick lunch we hopped on our bicycles and began exploring the trail. 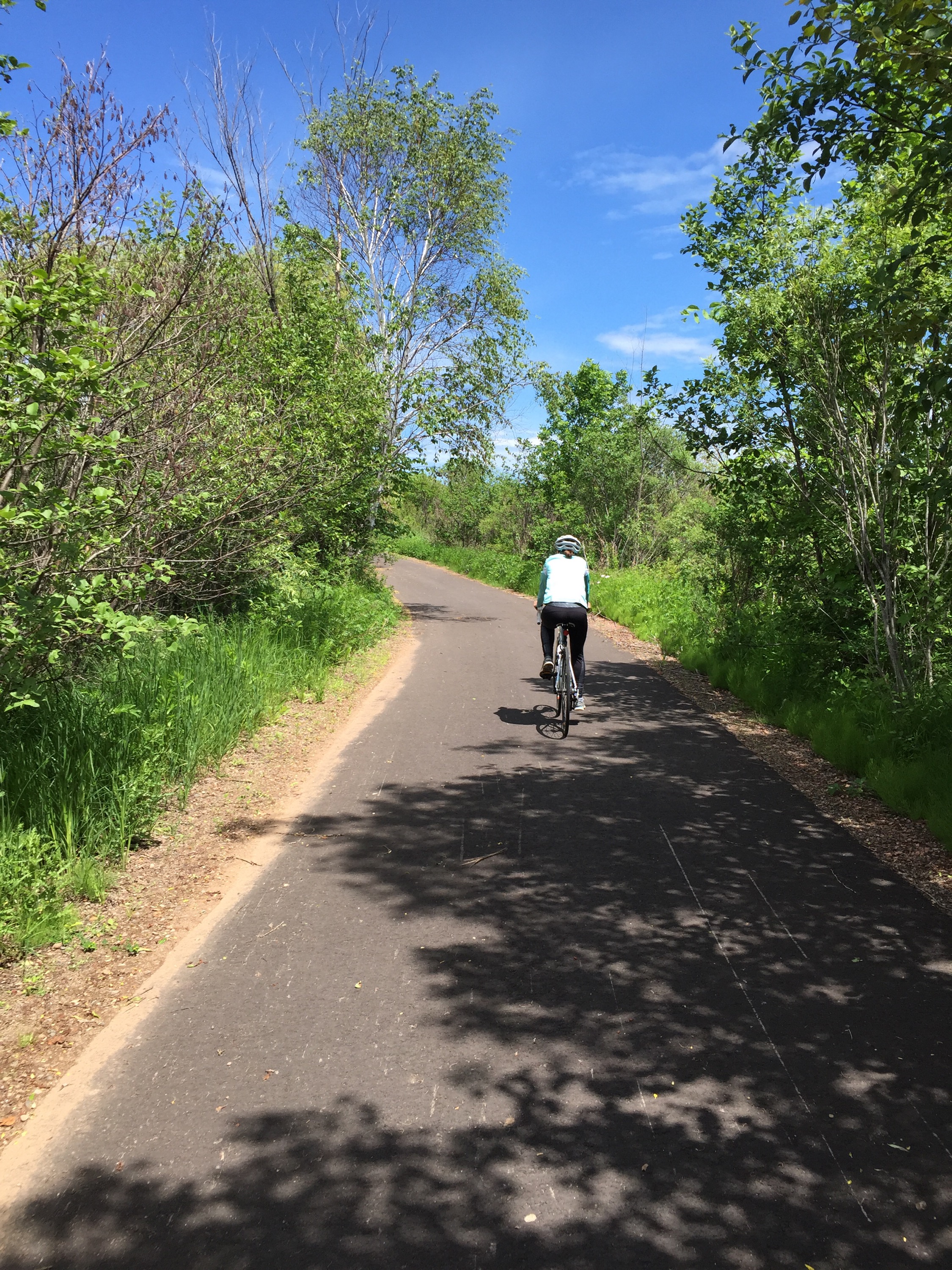 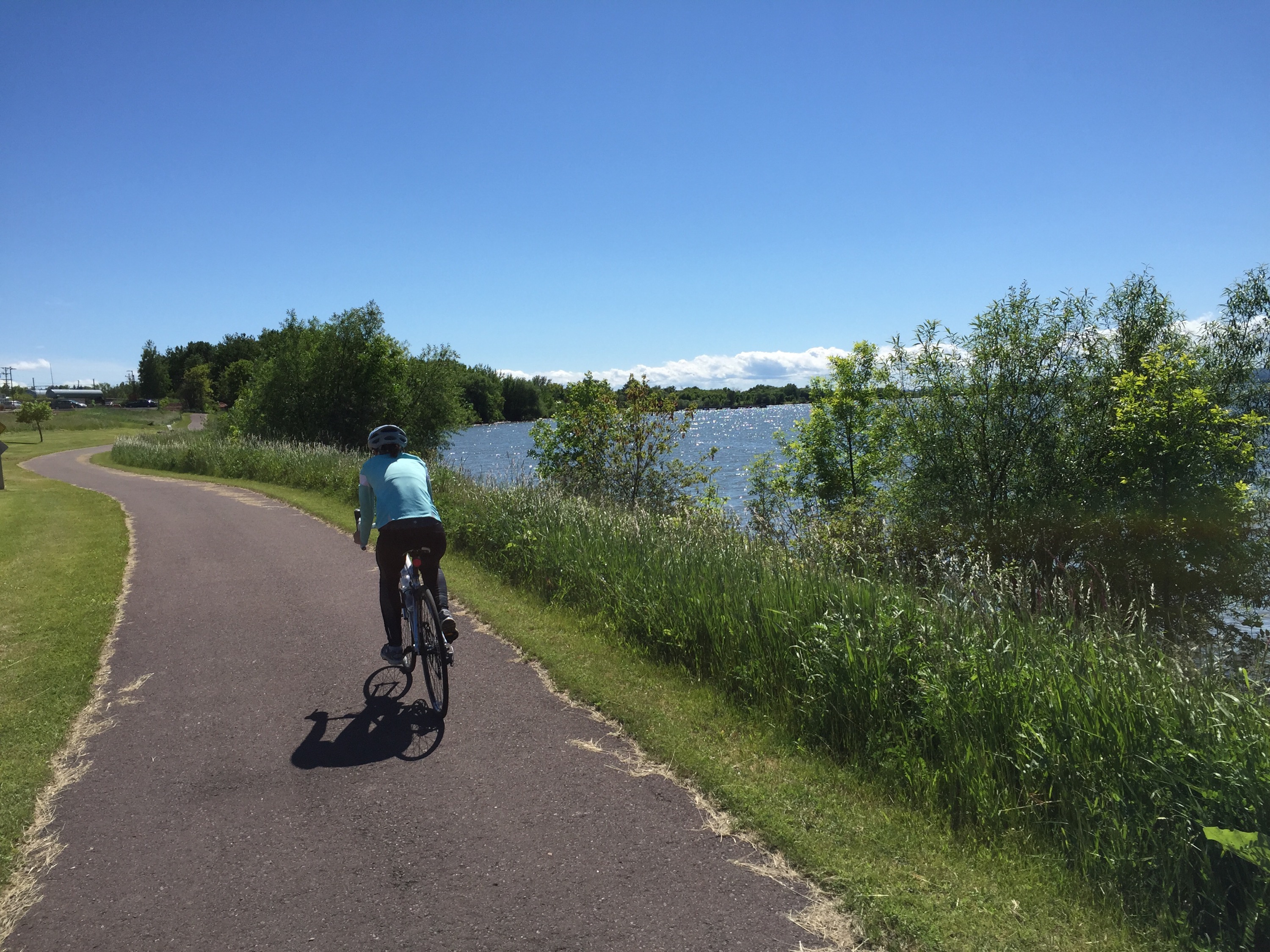 It was a nice path, wide and paved, that circled through the park and then along the shore of Lake Superior. We detoured the wrong way and ended up on the shoulder of the highway – fighting a brisk headwind on the way back. Rejoining the trail we head along the shore, checking out the marina, past downtown and beyond.

Alas, Ashley suffers another flat, in her new tube! and we discover that our tire levers are sitting in the RV’s booth. Fortunately, we searchd online and discovered the trick to taking tires off by hand. Though it still took a long time! Patched the tube and found the little metal splinter that was causing us issues. The tire didn’t look like it seated exactly afterward but Ashley said it felt fine.

We continue on and find a nice RV park (city run) right on the water. A few miles later we see a Wal-Mart, niether of which were shown by the GPS.

Ashley notices that her wheel seems to have a “flat” spot and it looks to me like the tire needs to be let down, reseated in the rim, and then aired back up. Easier done back at the RV with the foot pump, so we turn around. Checking out a plaque/map along the way shows that the trail circles on through down-town so we could have followed it on the rest of the way.

A commuter or two pass us, and we even notice that the Walmart has bike parking!

Back at the RV we notice that the back end of the motorcycle has “walked” over to the right and that one of the tie-down straps is missing. The eye-bolt it was hooked to on the floor has broken off! 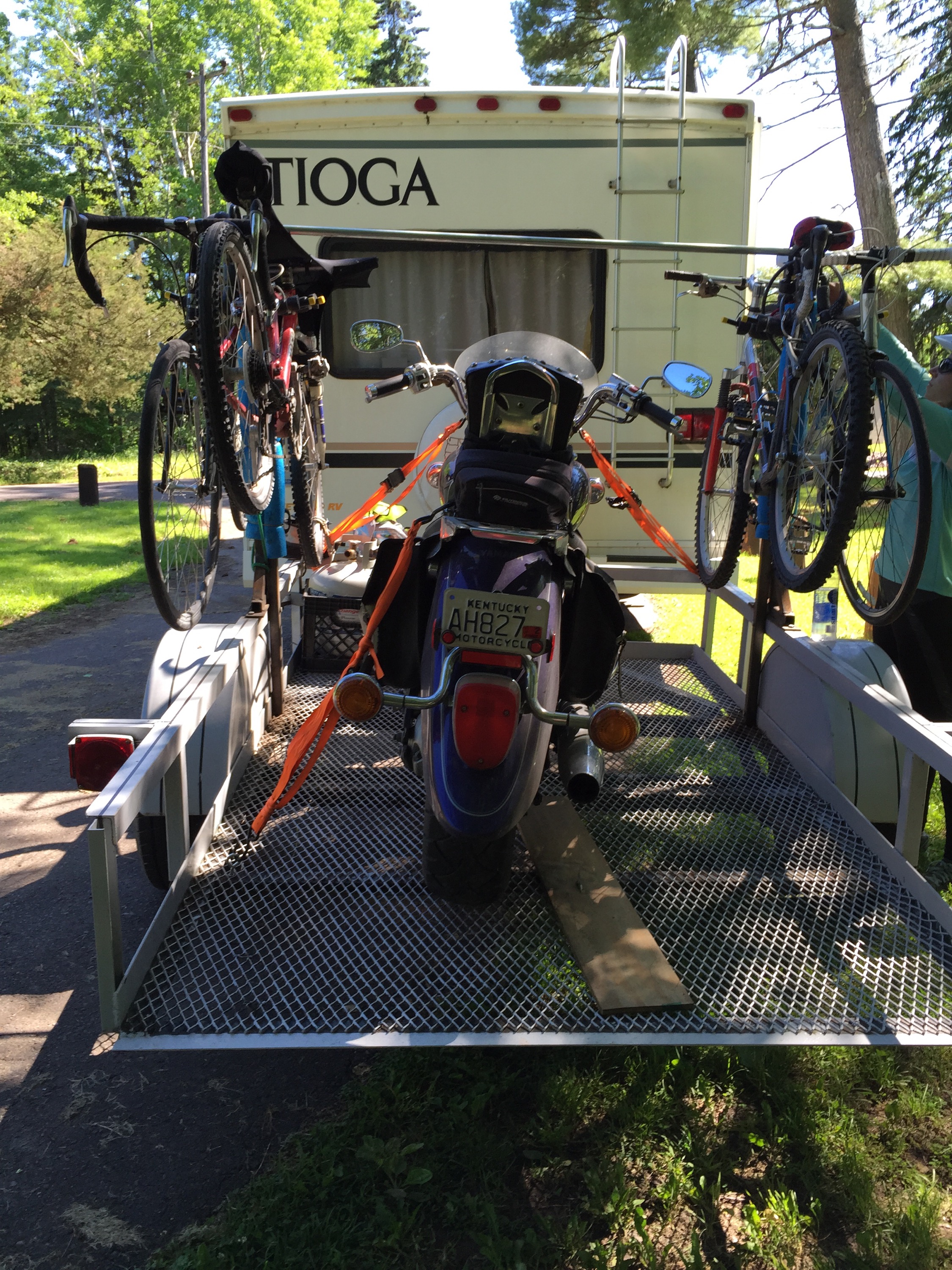 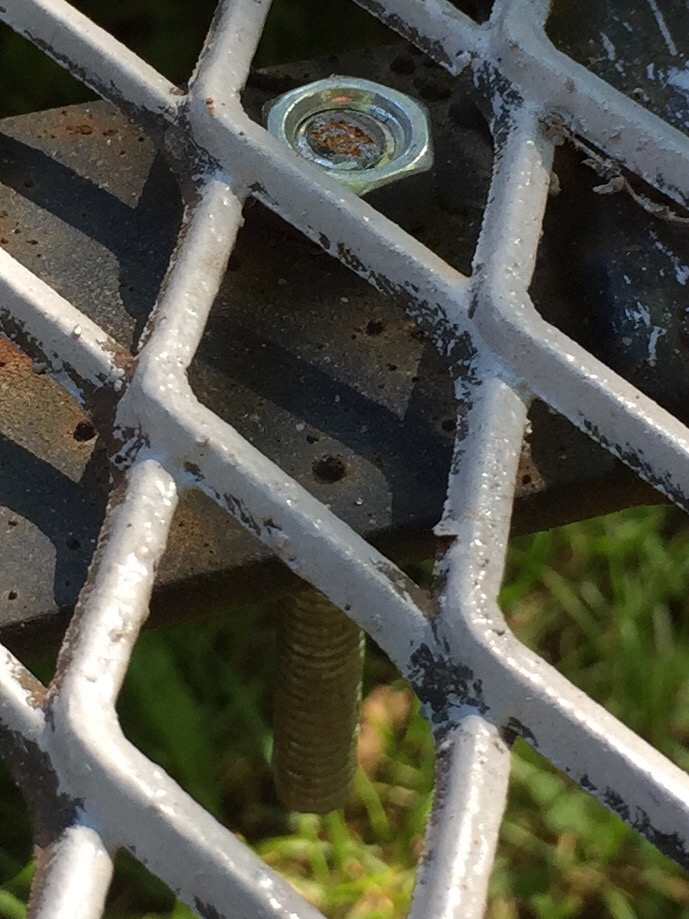 On the way to Walmart Ashley spots an ACE hardware and I pull in to grab a new eyebolt. At Walmart I buy a new lightbulb for the RV’s headlight that is out and a 4-pack of ratchet straps.

It takes awhile but I figure out how to pull the headlight out (apply liberal amounts of elbow grease) and go work on the trailer. I upgraded bolt sizes but now it won’t fit and I don’t have a power outlet to use my drill at the moment. We reload the motorcycle and realize that we can hook the strap to the trailer frame. That might be better than the eye-bolts – we’ll test it out and compare. The new straps are heavier duty than the old ones.

Jim and his wife pull in front of us for the night in a 5th wheel. Those things are huge! So tall! He comes and chats with me for awhile – recommends that we dive up to Alaska – aiming to be there mid-August, at the height of the Salmon run. He also recommended seeing Mount St. Helens – and to go directly to the visitor’s center at the peak, it’s nicer than all the ones you pass along the way. He and his wife were truck drivers for years and retired in Florida because it’s next to a warm ocean you can swim in and it’s affordable, compared to Portland where they are from. So now they take an annual cross-country trip from Florida to Portland.

Ashley cleaned house while I worked outside and afterward we had supper. Finally popcorn while reading and then time for bed. Full day!