Our neighbors (of a foot away) were early risers so I started being awake about 4:00. We got up at 5:00 and started packing. Temperature dropped last night so really dewy – the tent was soaked and my nose was stuffy.

Pretty sunrise and nice to watch the sky change as we packed (and for the first hour or so of our ride). We dropped off bags right before 6:00 and began pedaling. 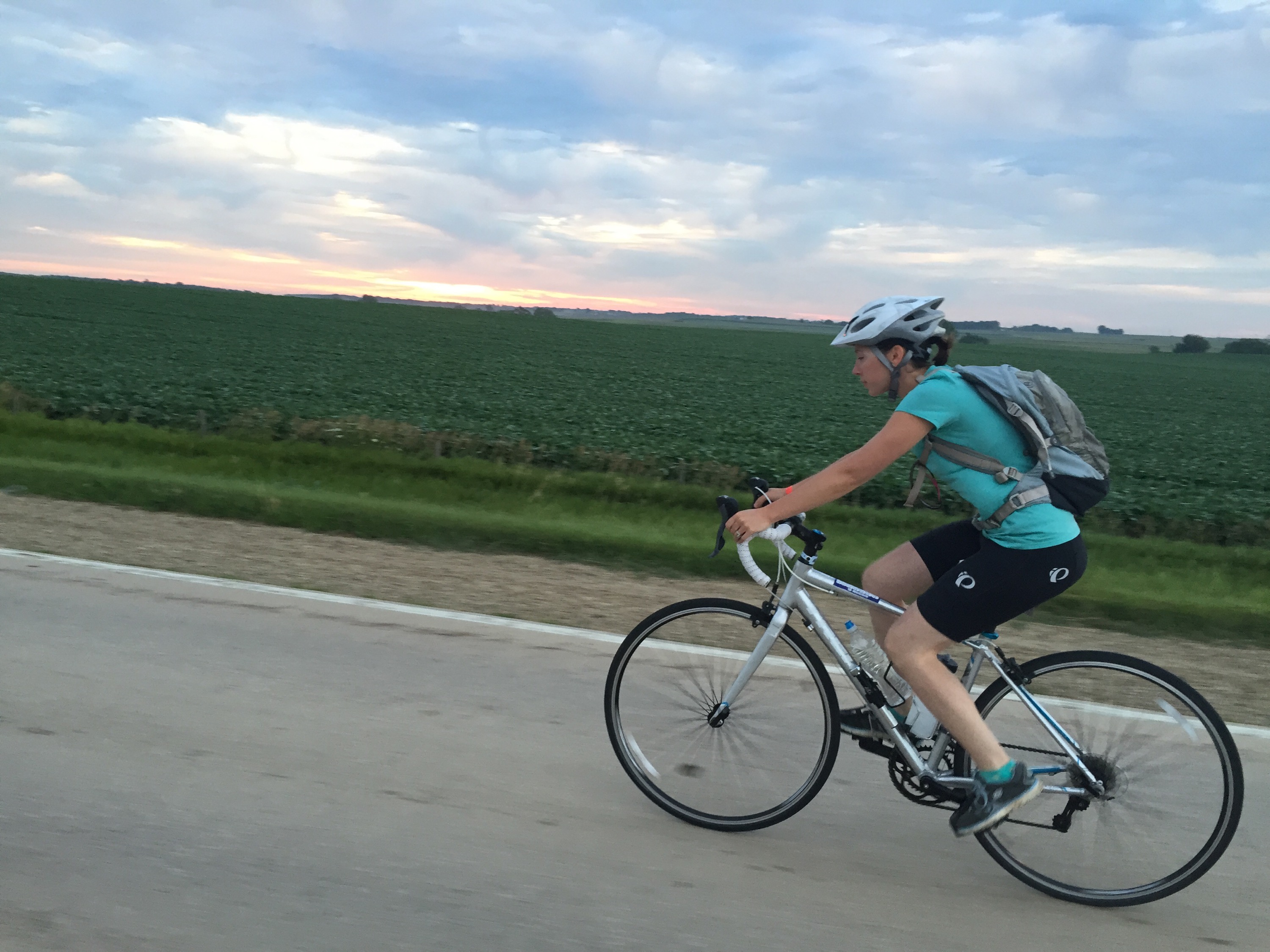 8.8 miles to Steamboat Rock. Ashley got a breakfast scramble bowl and I spotted a toasted sandwich that looked delicious. On the hill into town I downshifted too far and pedaled so fast Ashley said I looked like a cartoon, spinning my legs furiously and barely moving. Apparently we blinked and missed Cleves. Before we knew it 11.7 miles had passed and we were in Ackley. Stopping for bananas and a cheese danish we saw the Grinch walk by, little dog in tow. After eating we checked out the Cow Pie toss. Real cow pies – they did let you choose your own and provided gloves. 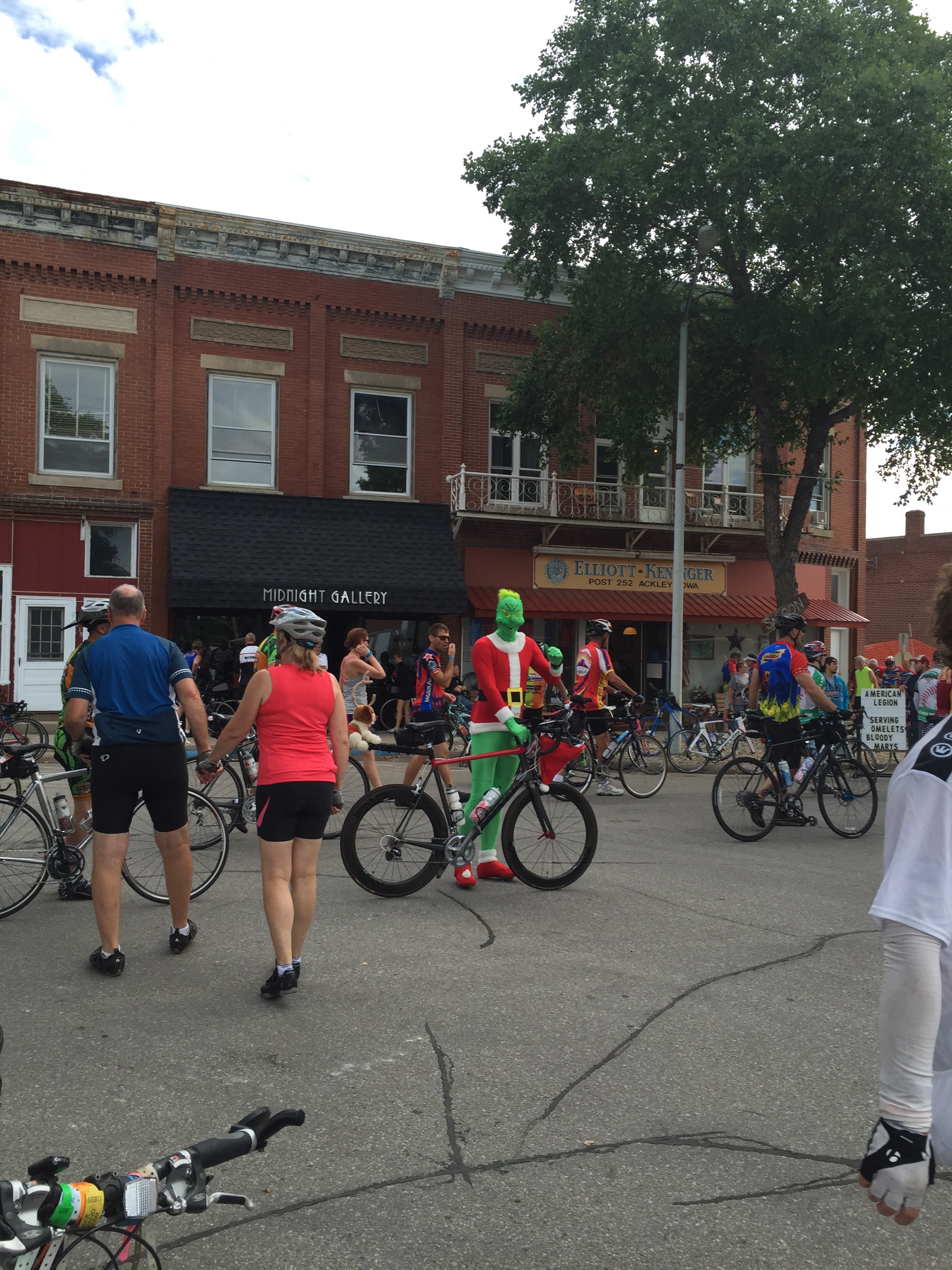 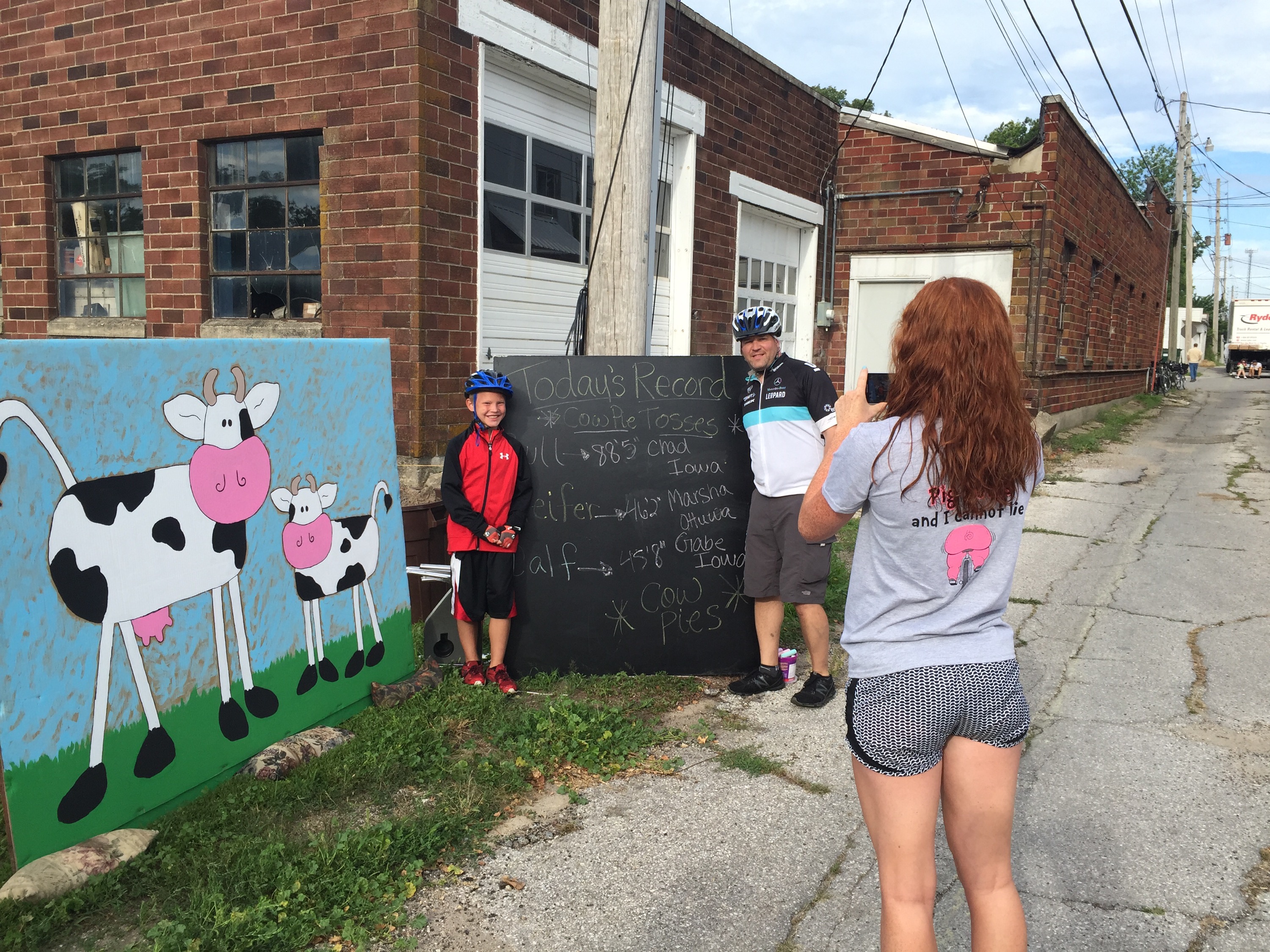 Austinville was 7 miles along, basically a wide spot in the road and we breezed on through. A mere 3.7 miles later was Aplington. The Peppercorn Pantry had some fabulous looking chicken salad croissant sandwiches, with fruit and tasty peach iced tea. We couldn’t pass up the carrot cake, either – everything looked so delicious! 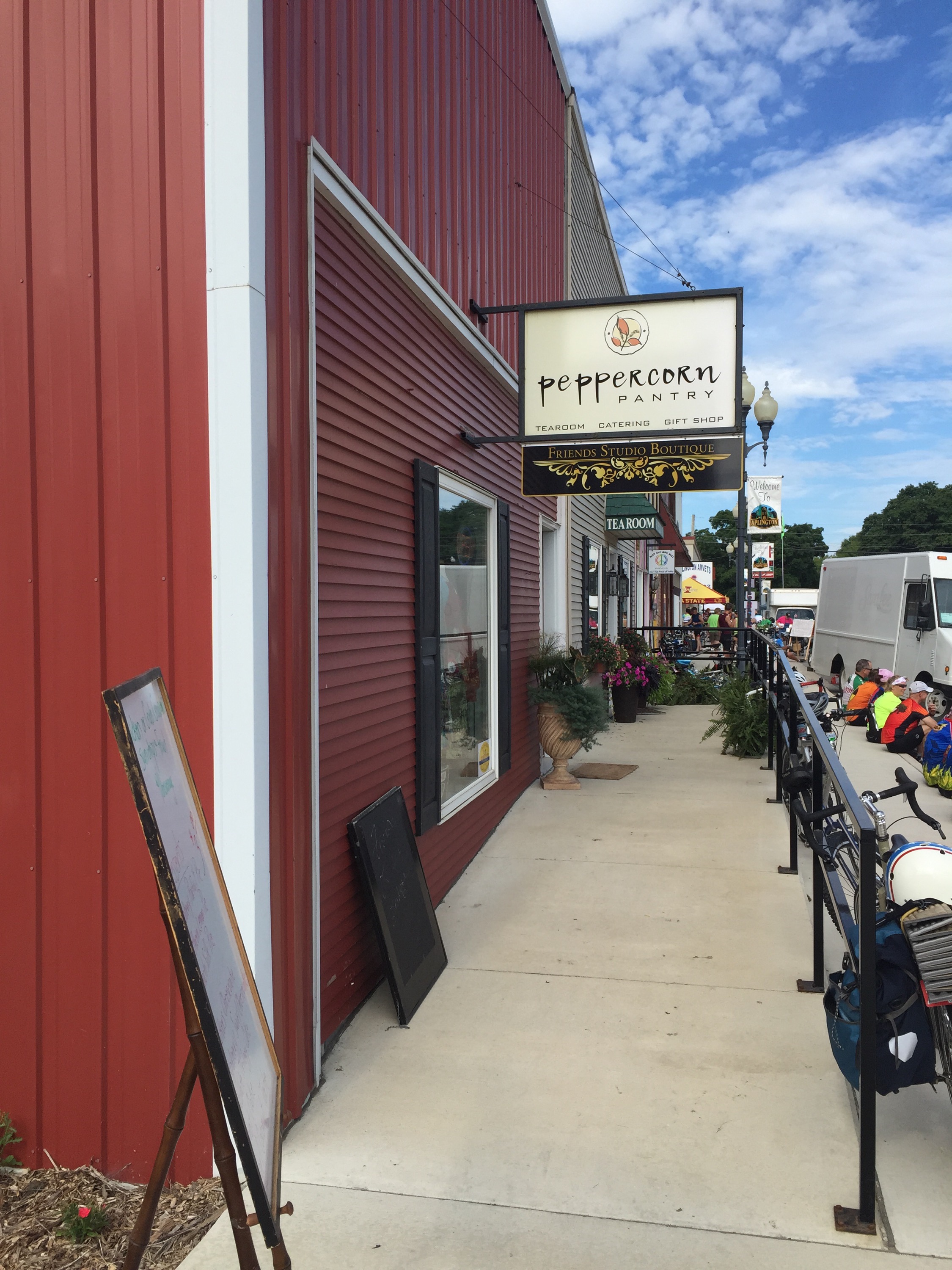 That’s one bad part of the journey – we find some real gems and only get to try a sampling or have to pass it up. We split this meal and it really hit the spot! 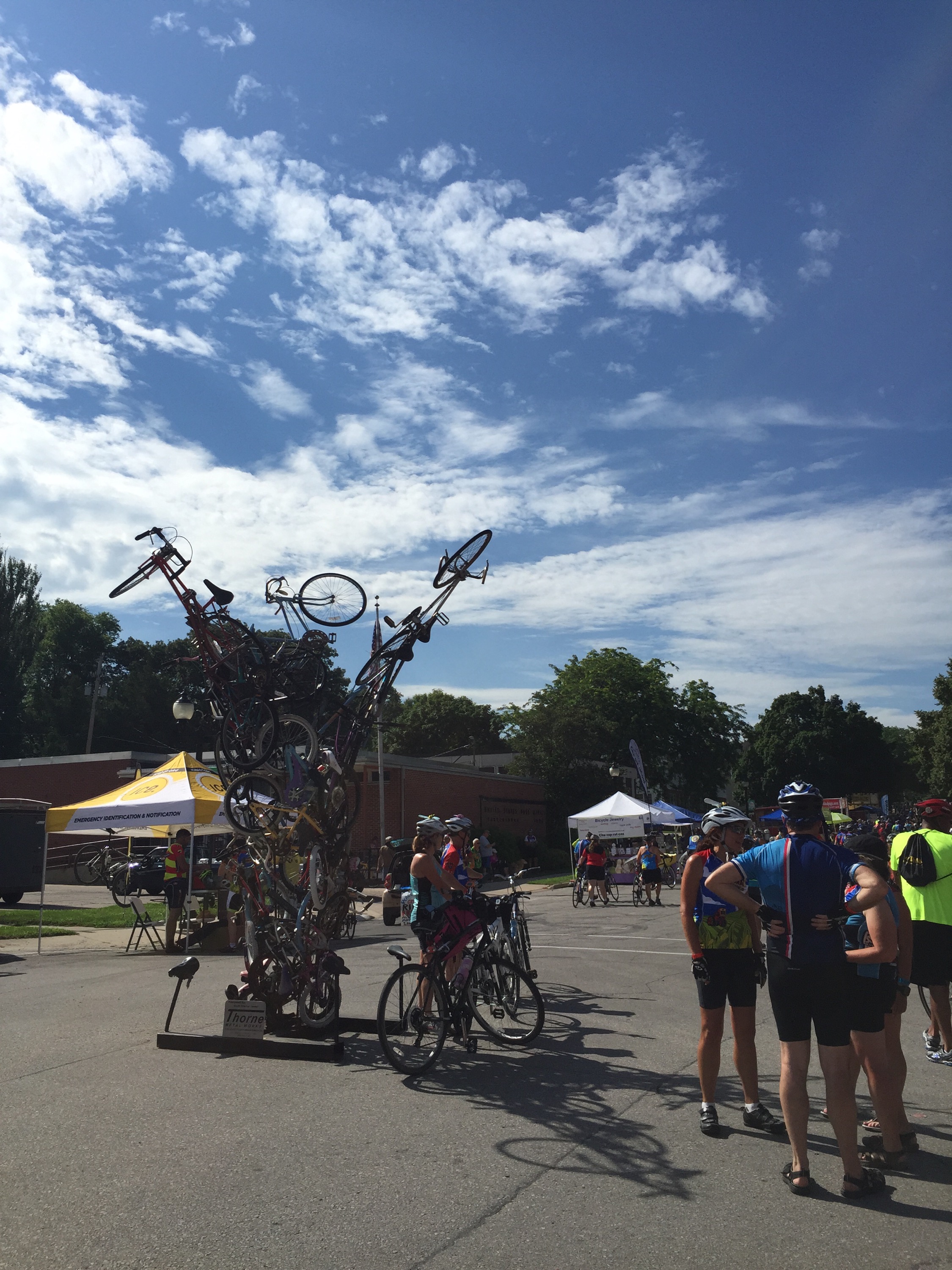 On to Parkersburg (5.2 miles) the meeting town. Full, we basically walked through town. They had some cool bike sculptures in honor of the RAGBRAI. We did stop under a shade tree to catch a couple of songs by a pep band. Good music! 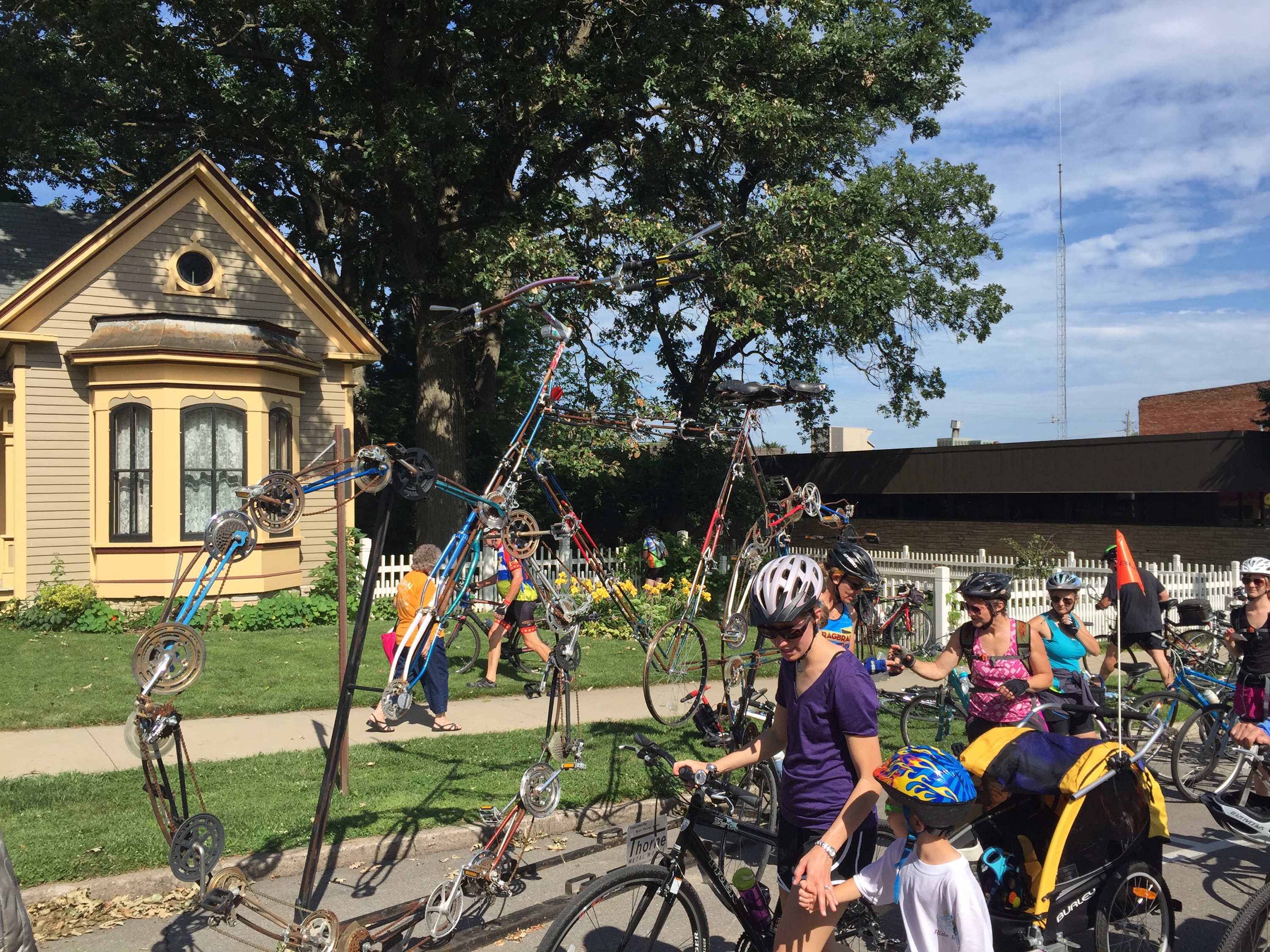 Rushing along to New Hartford 9.4 miles away we set in the shade for a rest and granola bar. Behind us were some fun yard games and Ashley and I gave one a try. It’s a mesh tube with dowel sticks poked though it, holding balls up. Take turns pulling out sticks and if you make a ball fall it’s yours. Player with the most loses. One of us won. 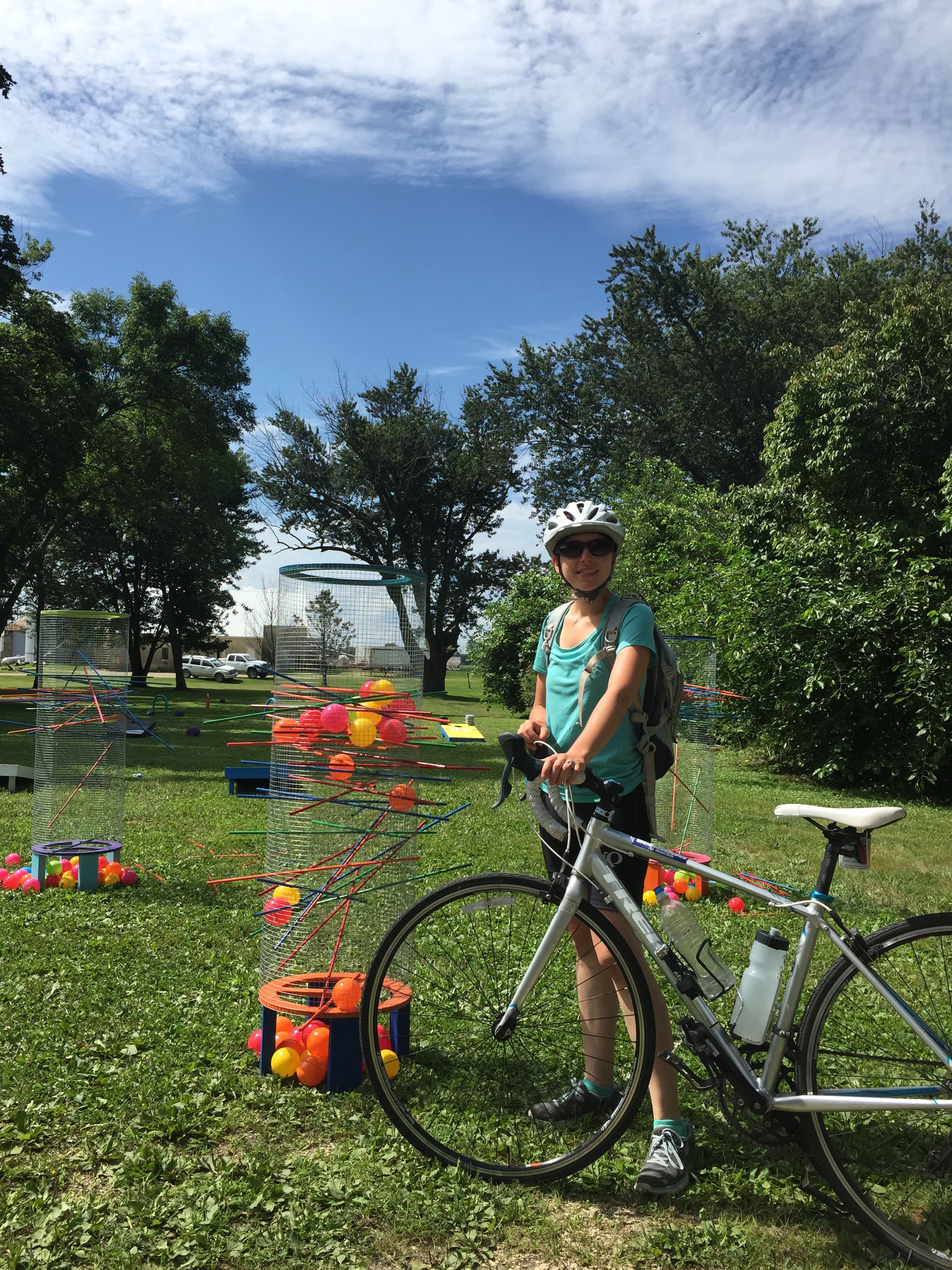 Apparently New Hartford is right next to a dam and they really played up their mascot, a beaver. Had shirts that said “You must be a beaver -picture of beaver- cuz dam!” 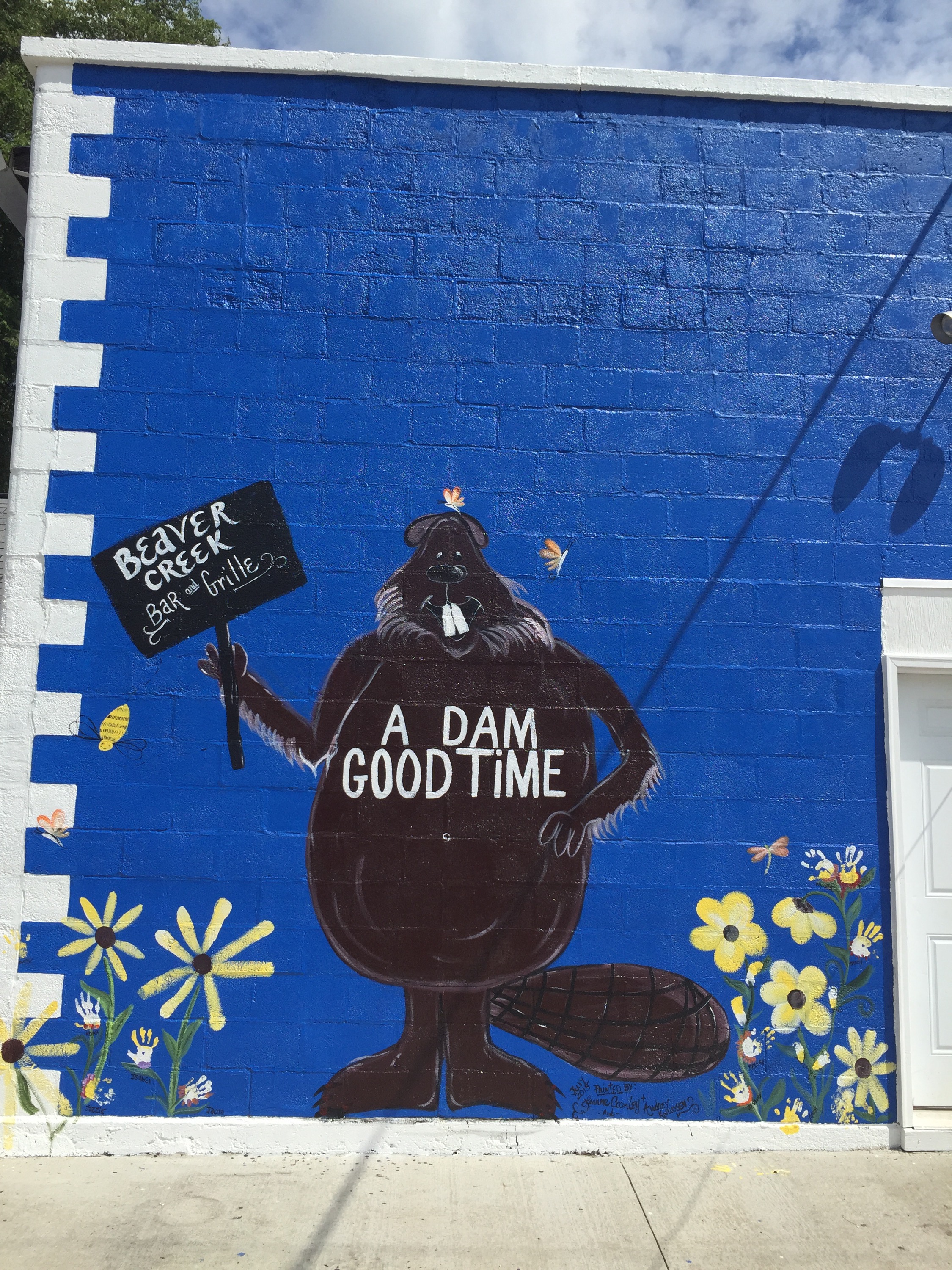 12.6 more miles and we rolled into Cedar Falls for a total of 58.4 miles and 1,644 ft of climb. Our shortest day of the week, and arriving at 12:00, our quickest day so far. We didn’t stop long at any of the towns and kept ahead of the crowds so we didn’t have a lot of long waits to contend with. Snagged a spot in the treeline so it is nice and shady. Once set up we headed to the Rec Center for showers. Really nice facility and the showers were great.

There is a football field between us and the band stadium so it’ll be loud tonight with the concert. Fortunately we have ear plugs. When we headed out to the downtown area on the trolley the field was empty, though I’m sure it won’t stay that way for long. 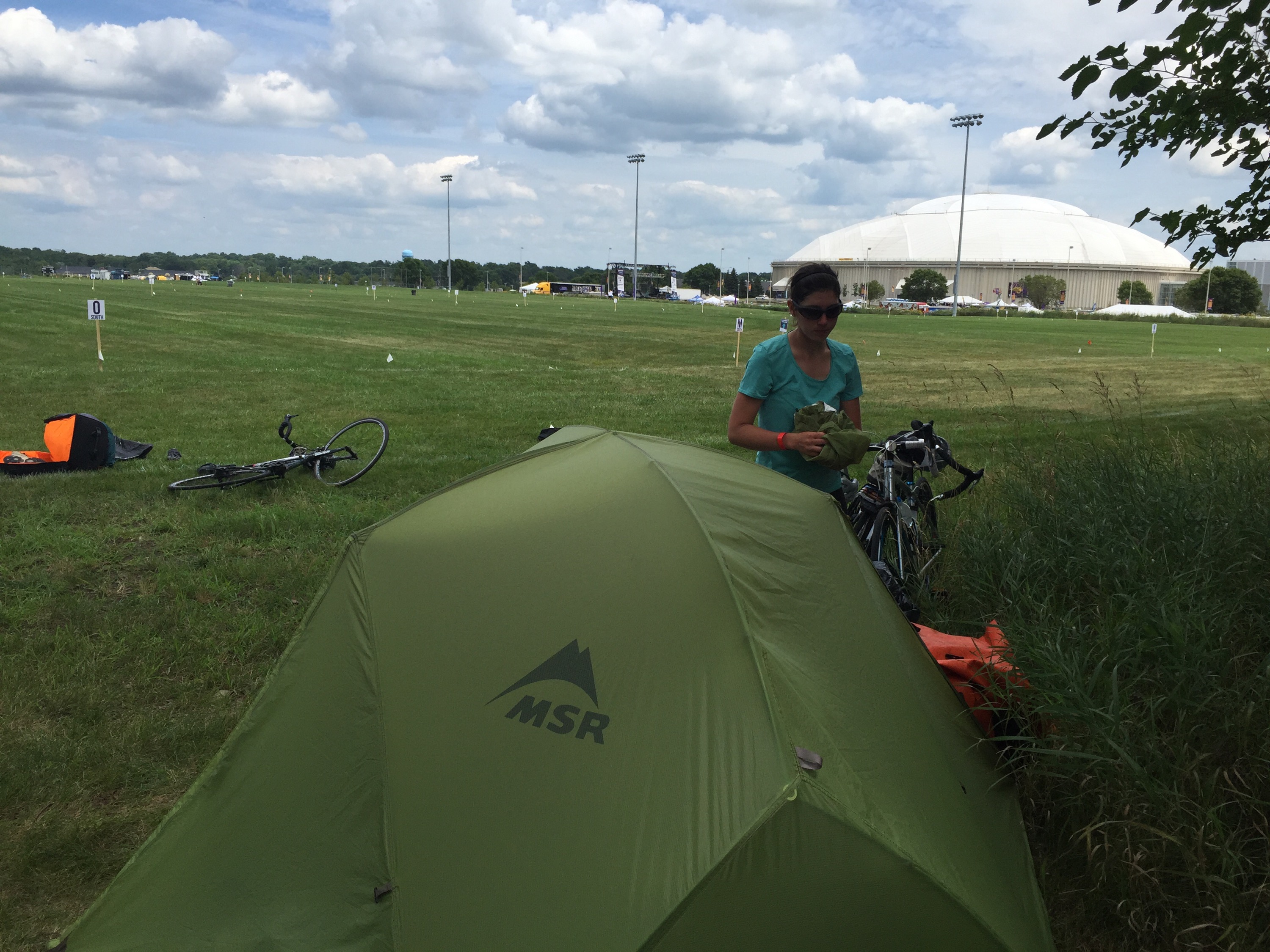 Downtown was really recommended and has been great thus far. Great popcorn shop had delicious samples and we got some kettle corn to snack on while heading down to Cup of Joe, a recommended coffee shop. Great drinks (mocha and a vanilla latte) and a chance to charge and journal a bit while soaking up wifi. 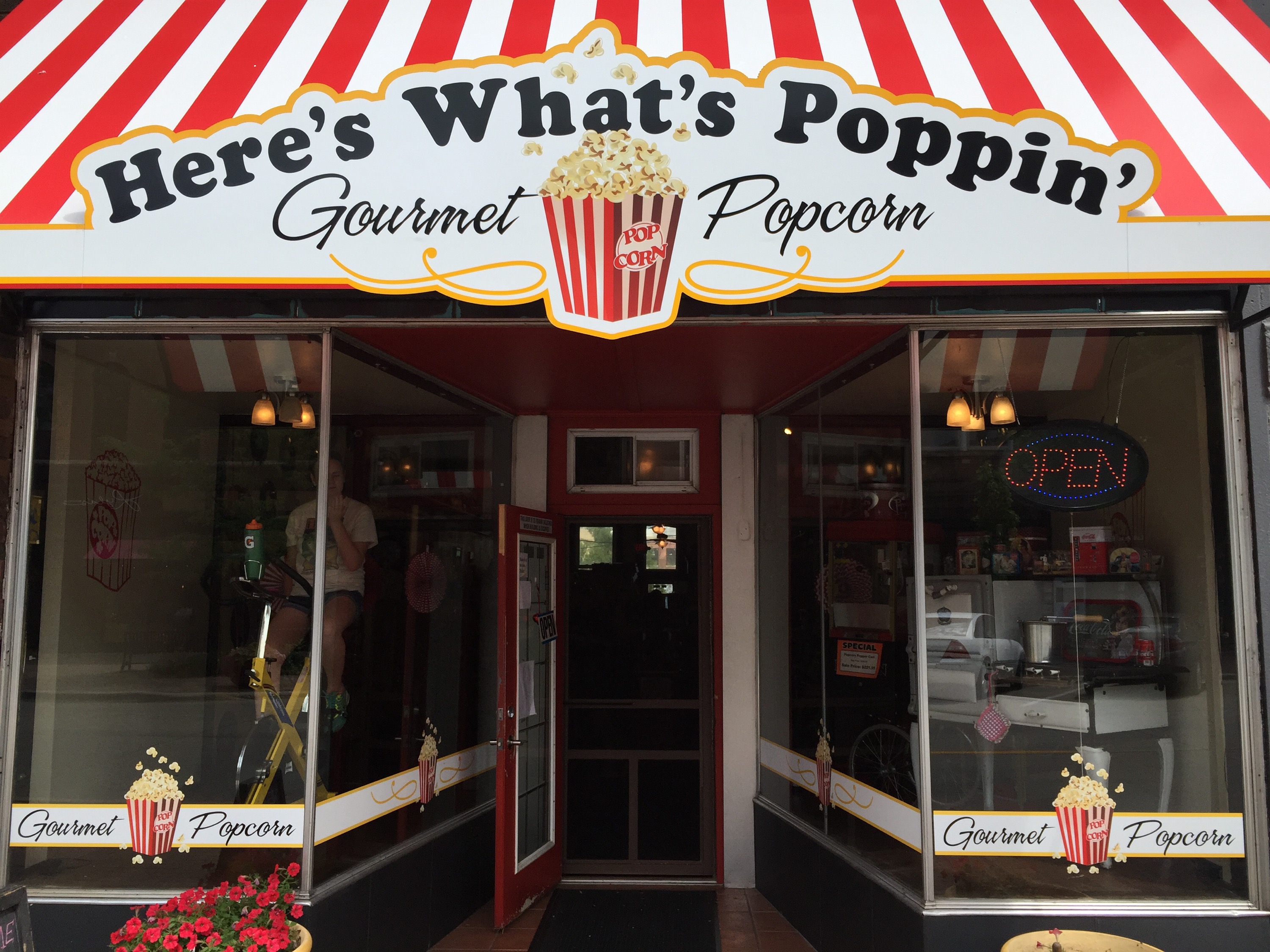 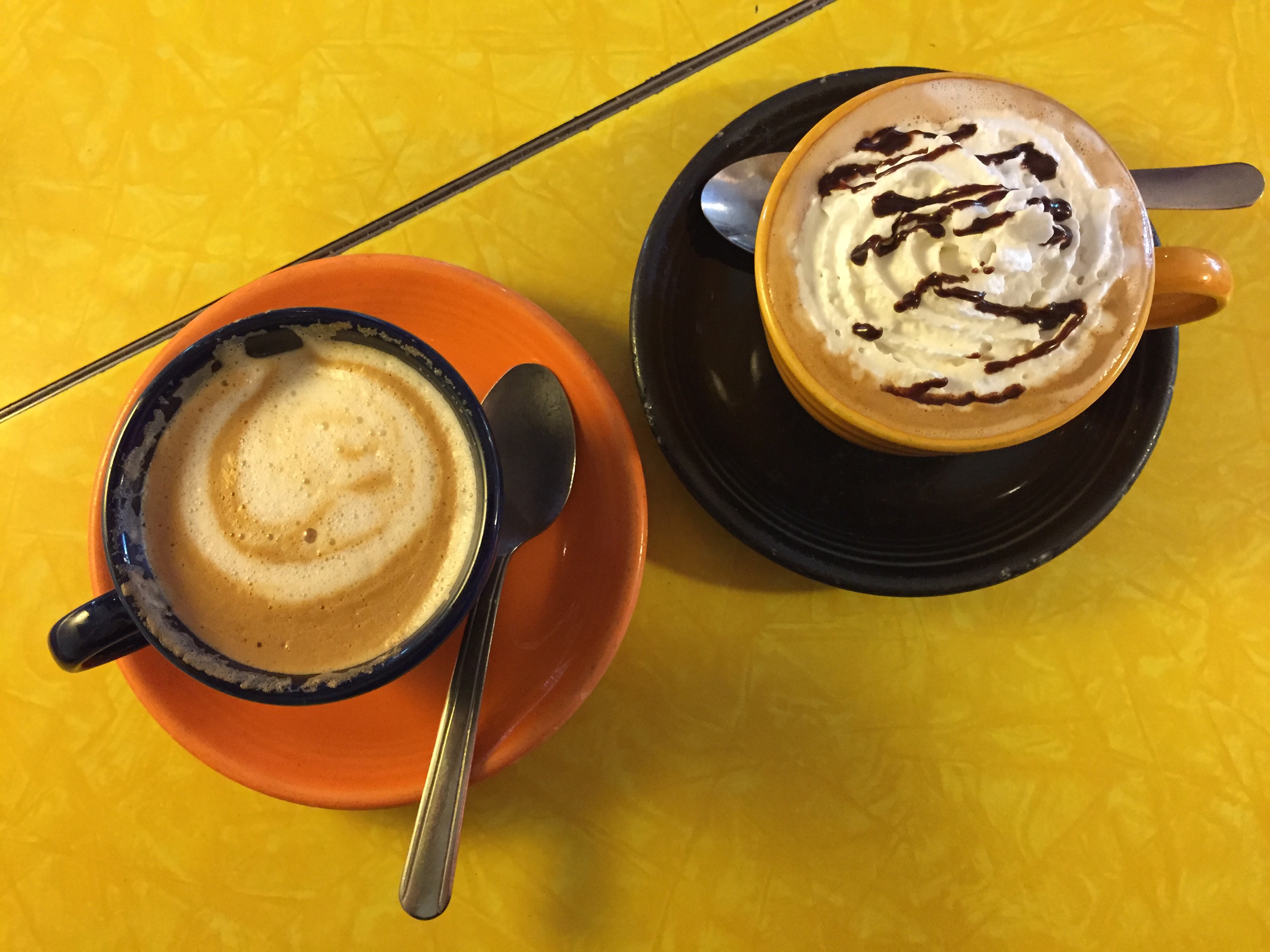 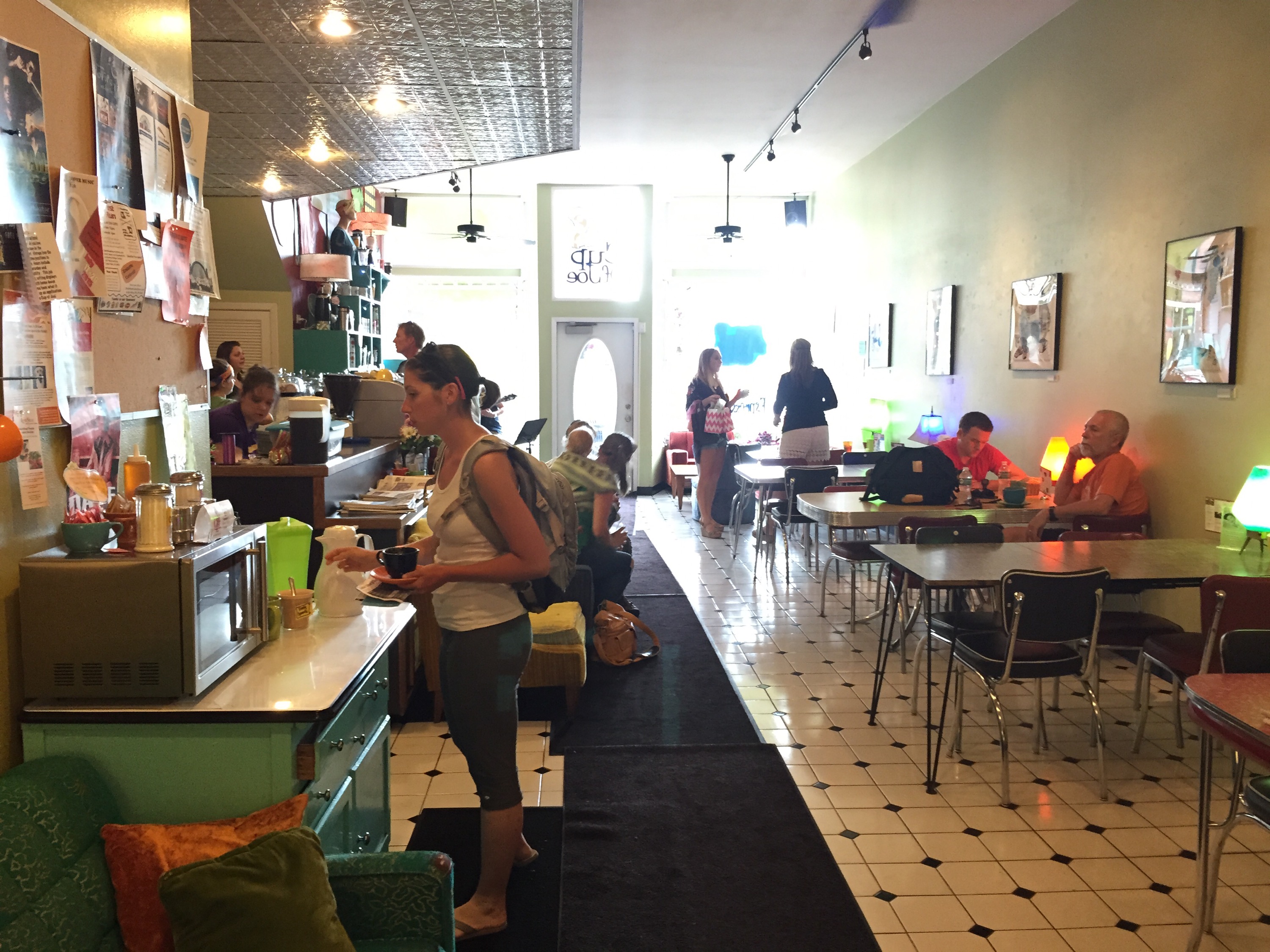 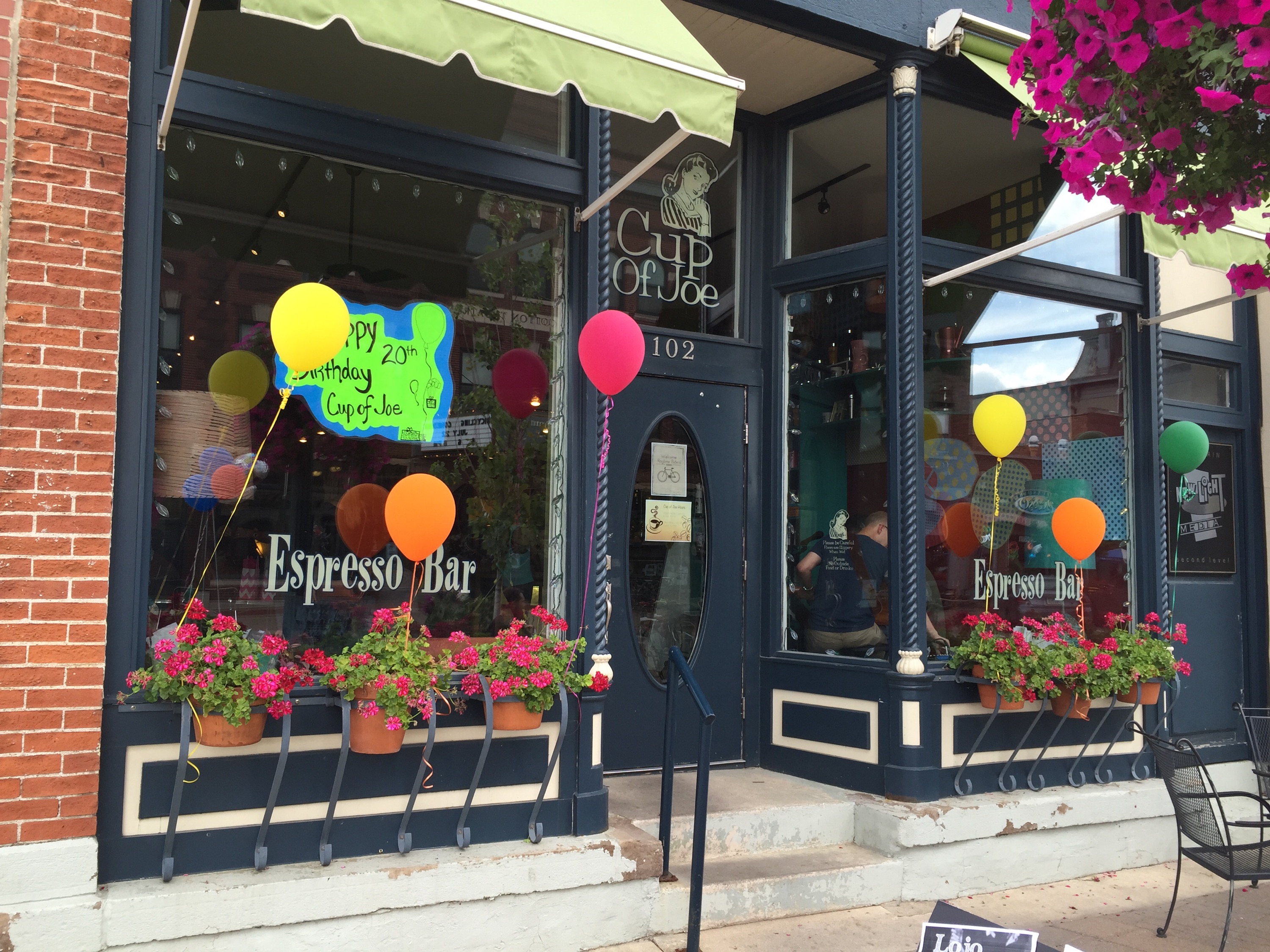 A few blocks down is a great sounding build-your-own burger joint, think we’ll hit that up for supper before heading back to our tent.

Stopped for burgers at The Pump Haus, making sure we beat the crowd. They were just starting to grill out on the front stoop as we ordered. I piled mine with bacon, egg and avacado while Ashley went more traditional. Fries for me and tater tots for her. Oh, was it fabulous, and more than filling! Cost roughly the same as what we were paying from the trucksf or far more food. I let our phones top off while we ate and it timed out almost perfectly. 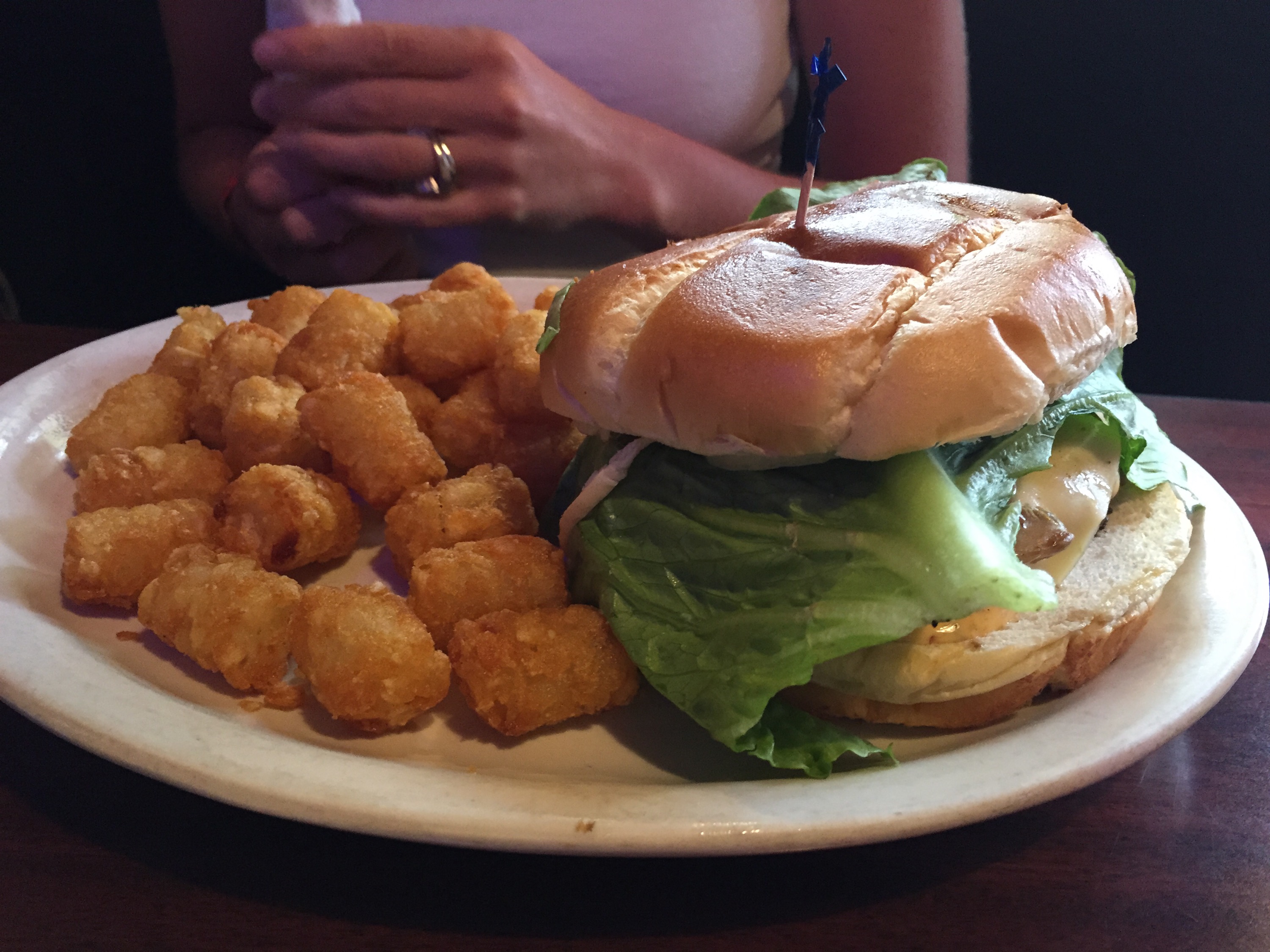 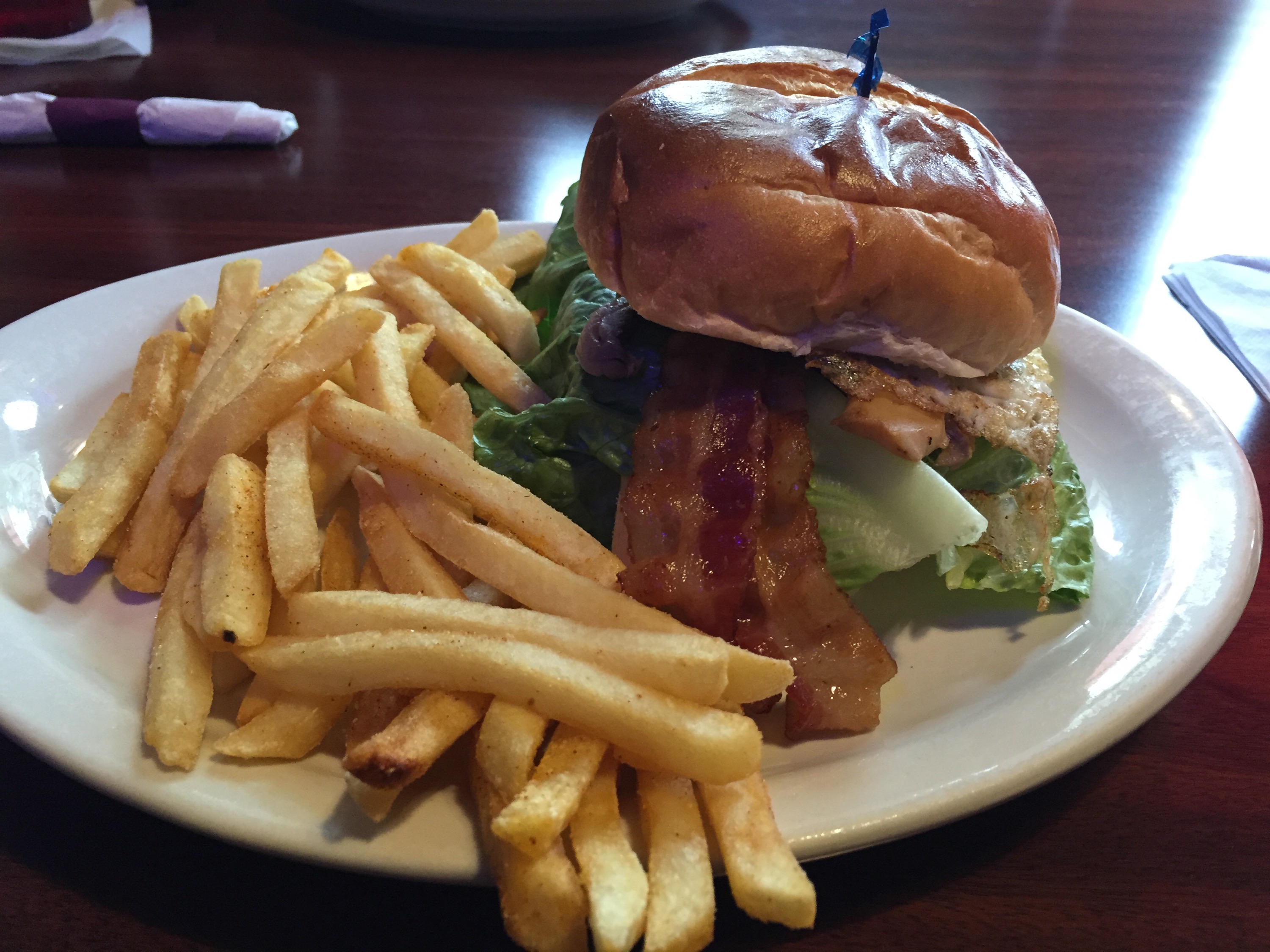 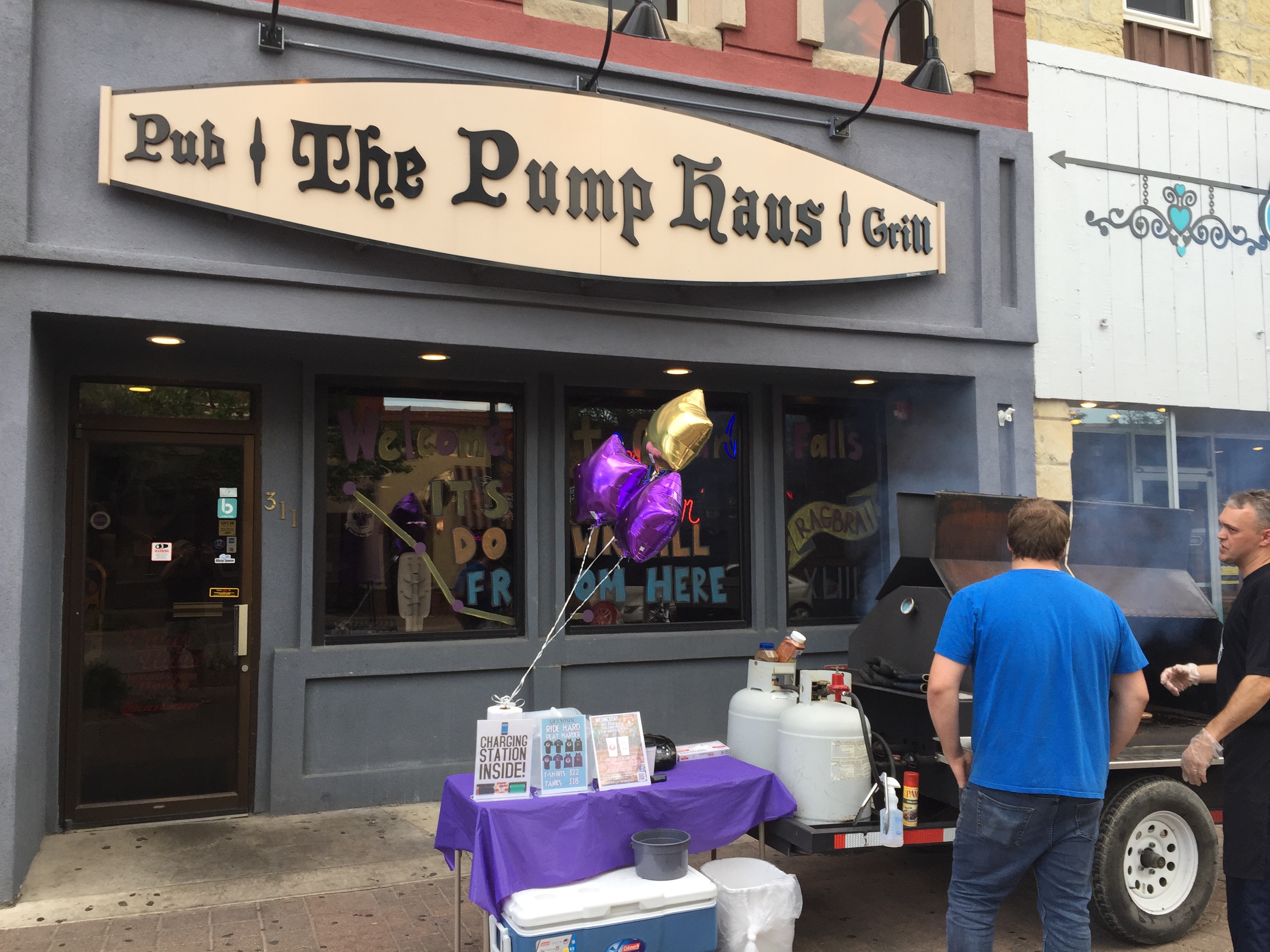 We took a stroll further down the block after eating and checked out more of Main Street. The art shop was closed, much to Ashley’s relief.

Reaching a gas station we looped back and visited Scratch Cupcakery. They came highly recommended and looked great. There were so many choices! Since I couldn’t talk them into giving out samples I fell back on a perennial favorite, reeses cup – chocolate cake with peanut butter frosting and a reeses cup on top. Ashley went for Strawberry Rhubarb. White cake with strawberry frosting and rhubarb jam in the milddle, topped with pieces of fruit. They were both so tasty, and not overly-iced. The recommendations were definitely accurate. 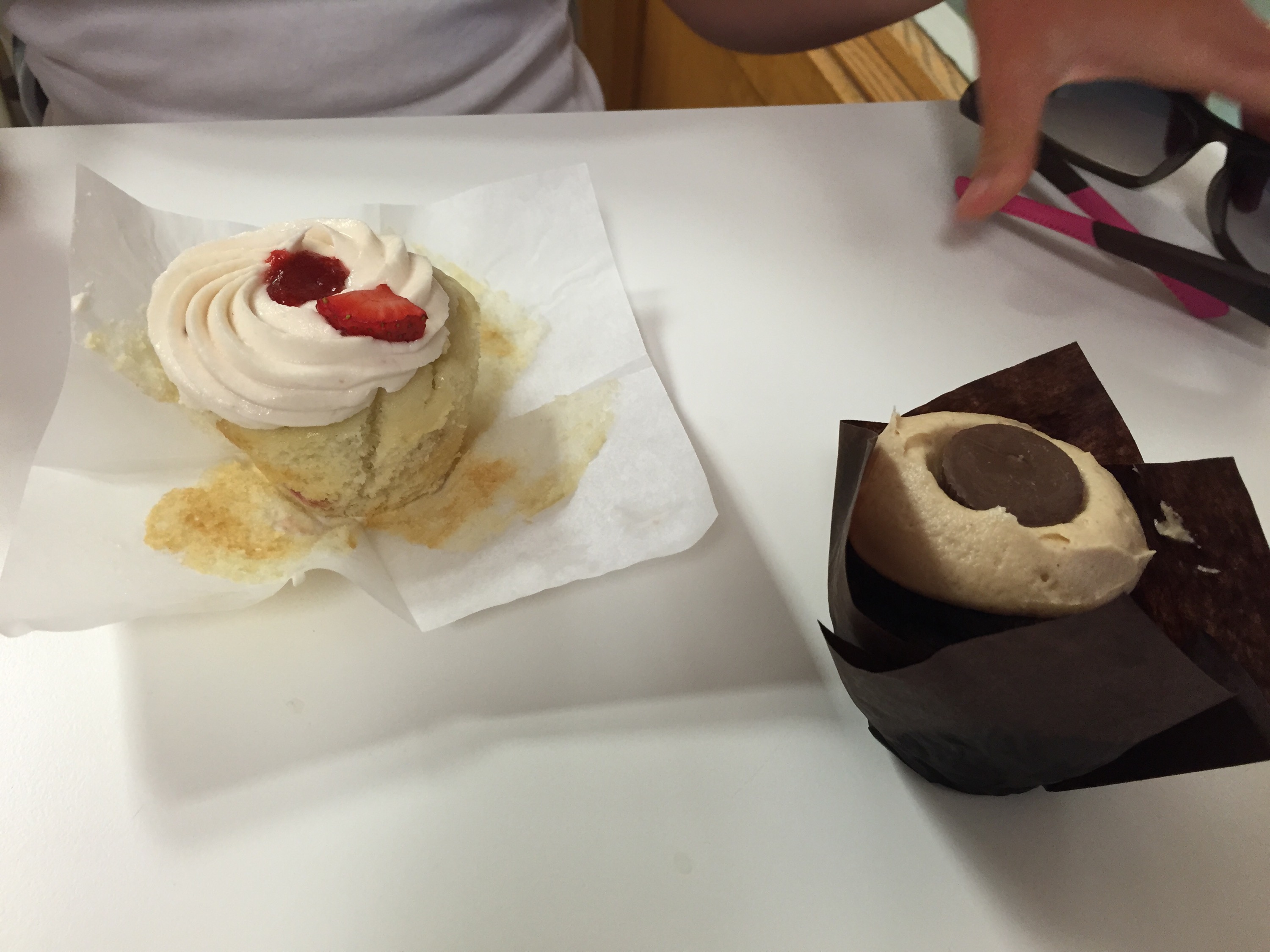 As we wrapped up there was a trolley parked across the street at the stop. We hurried over and were just able to catch it.

Back at the school we meandered through the stalls at the shopping area and headed back to the tent. Ashley read for a bit as I aired up the bike tires and got ready for tomorrow. Chatted with a couple of guys for a while, until we were told that a fellow was riding with a parakeet and dog. This we wanted to see so we headed over for a brief visit.

Indeed, the dog rides along behind and the bird has a cage on the handle bars in place of a basket. The owner has a spray bottle to help keep them cool. 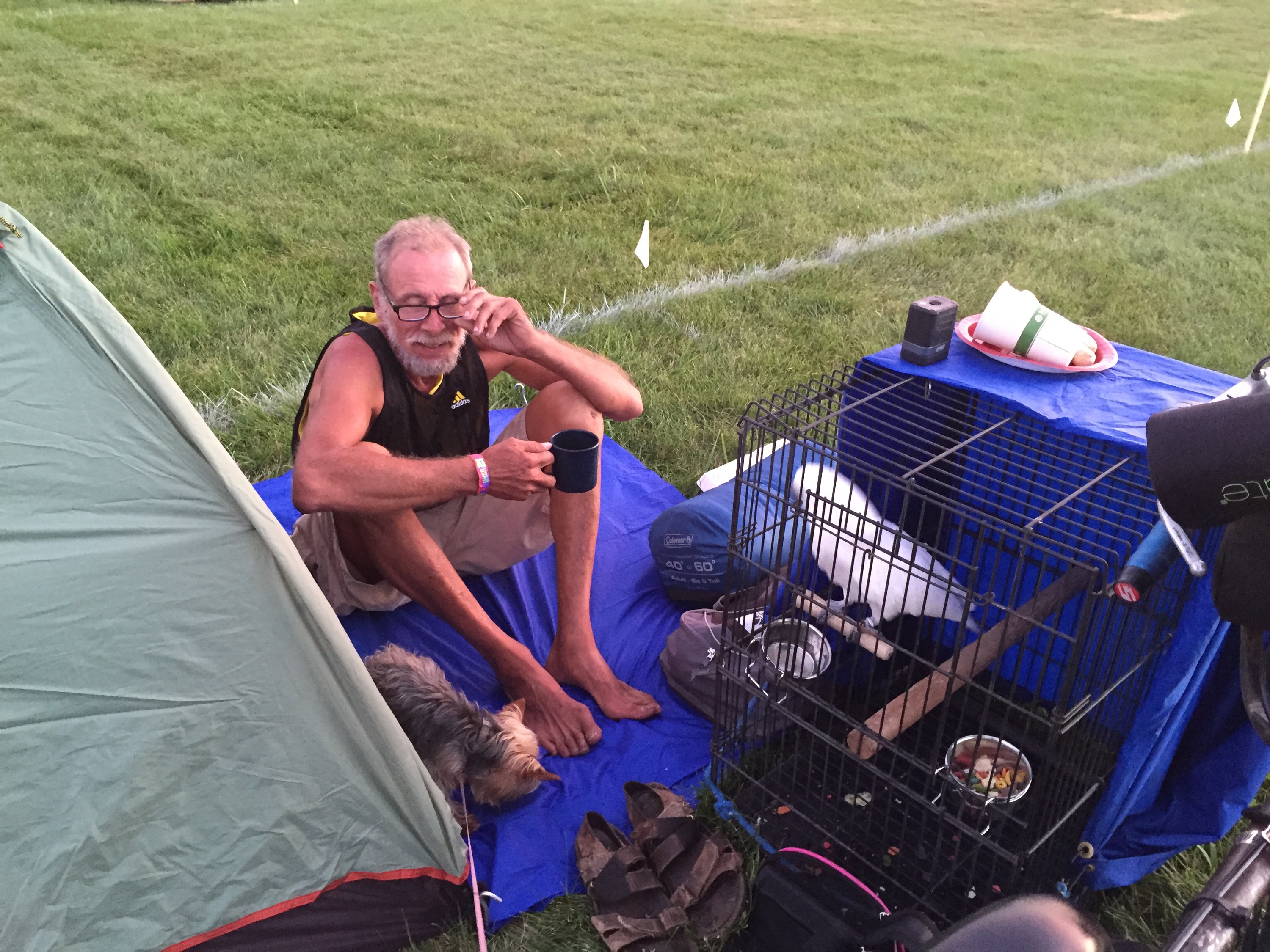 The others headed on to catch part of the concert while I went back to the tent. Watched a pair of ultralites tooling around while I got ready for bed. 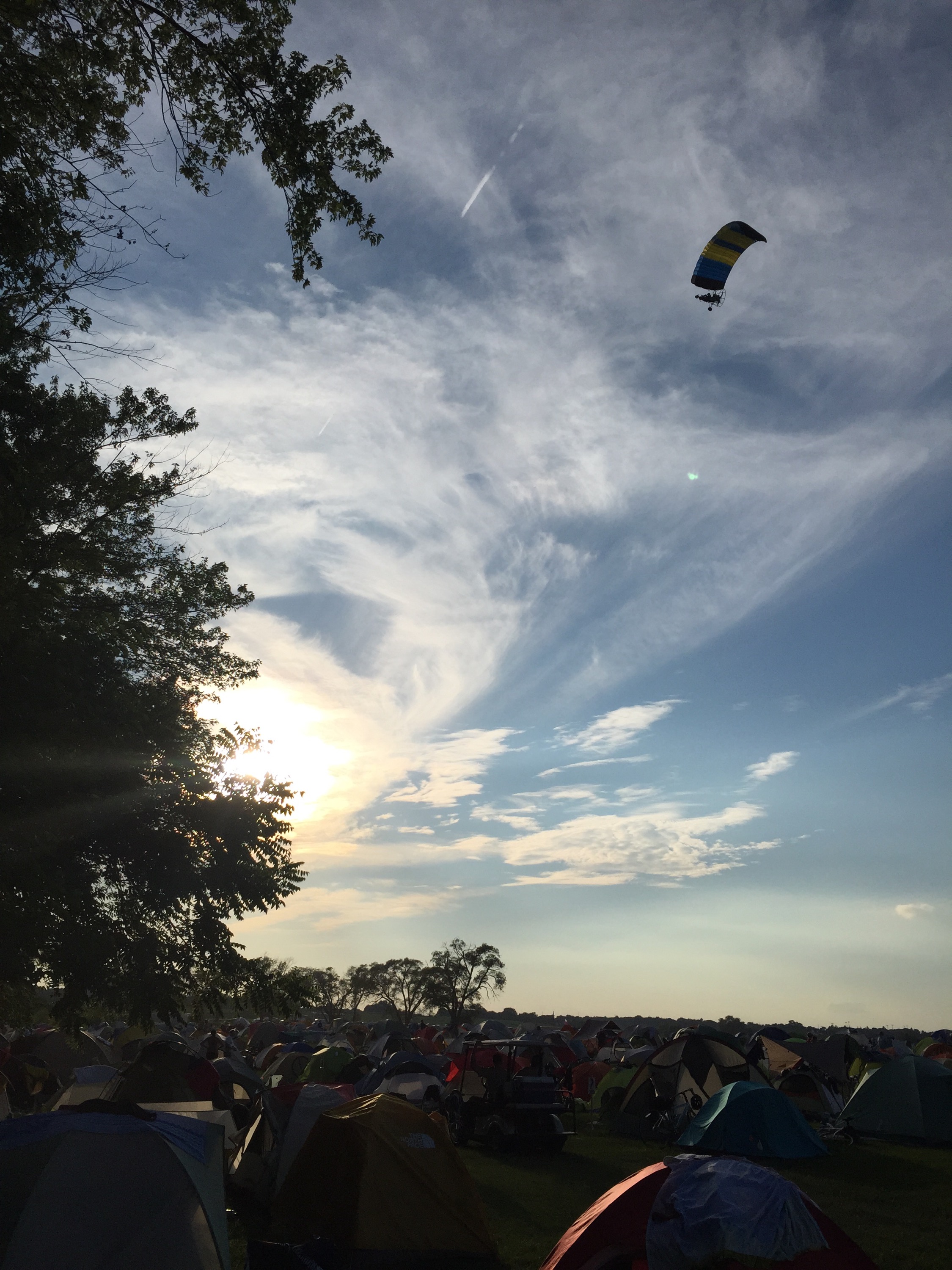 The band was just getting warmed up as I prepared to turn in. I put in my ear plugs and thought I’d give it a try!