After breakfast we unloaded the motorcycle and headed back down the freeway a few miles to top off the gas before heading into the park. It’s 47 miles to the other side and the next gas station (which is about half the comfortable range of the bike). While there we realized that we forgot to grab our National Parks pass, so we stopped back at the RV to get it. After looking through, as far as we can tell, every nook and cranny where it might possibly be, we still couldn’t find the pass. Our fear is two-fold – it’s either tucked somewhere unusual and we’ll find it just after we buy a second one, or it’s lost forever – probably pulled out of a pocket when removing a map and lies on the ground somewhere in Saguaro, still good for another 6 months but languishing away in a rock pile along a trail.

Giving up our search we head on into the park and pick up a new pass. It’s a new year and so a new picture on the pass. We definitely got our money’s worth out of the old one, but it was good for 6 more months so that’s certainly a shame.

Pass, map, and park newsletter safely tucked away we head on into the park, stopping at about every third exhibit area along the way to learn as we go. Joshua Tree covers two different deserts, the Colorado and the Sonoran, so we get to watch as the landscape changes from low desert to high desert. Unfortunately, the weather changes as well – the temperature steadily dropping as we climb higher and higher.

Ashley’s dressed for hiking, not for biking, since the forecast called for 70 degrees. I have an extra layer on that she doesn’t and I still got cold… glad I’m blocking as much of the wind from her as I am.

We stopped at a rock outcropping for a picnic lunch. Who’d have thought that we’d be seeking a sunny spot to sit in while in the desert! Amazing views, though, and quite varied – especially as we cover some distance. 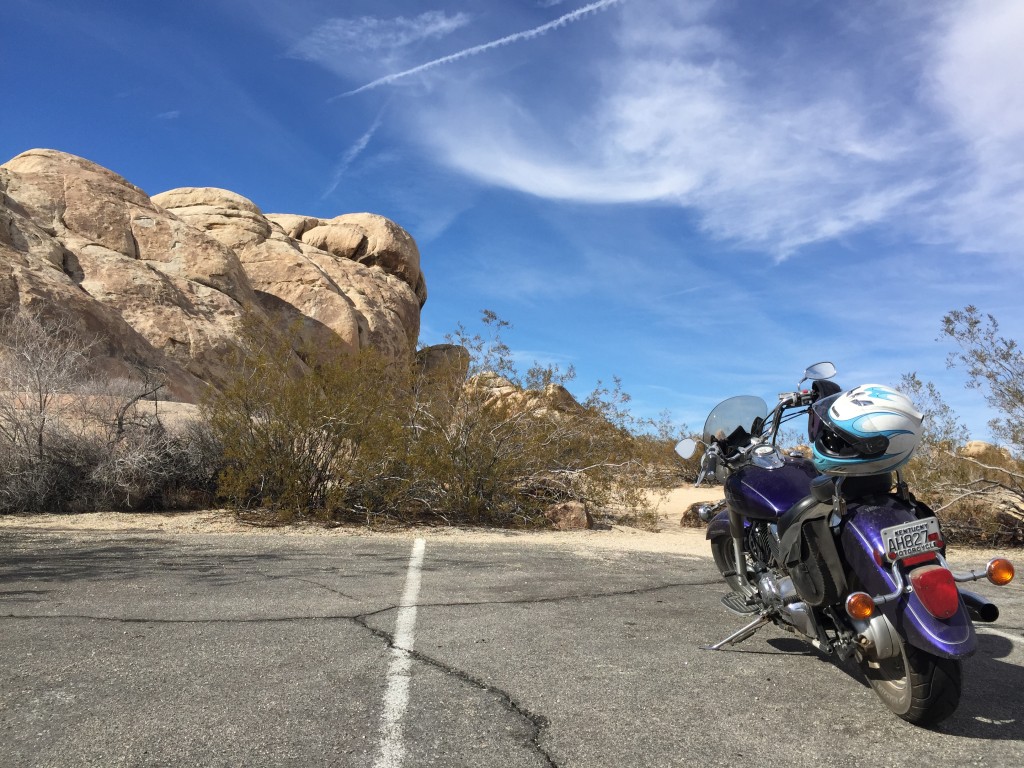 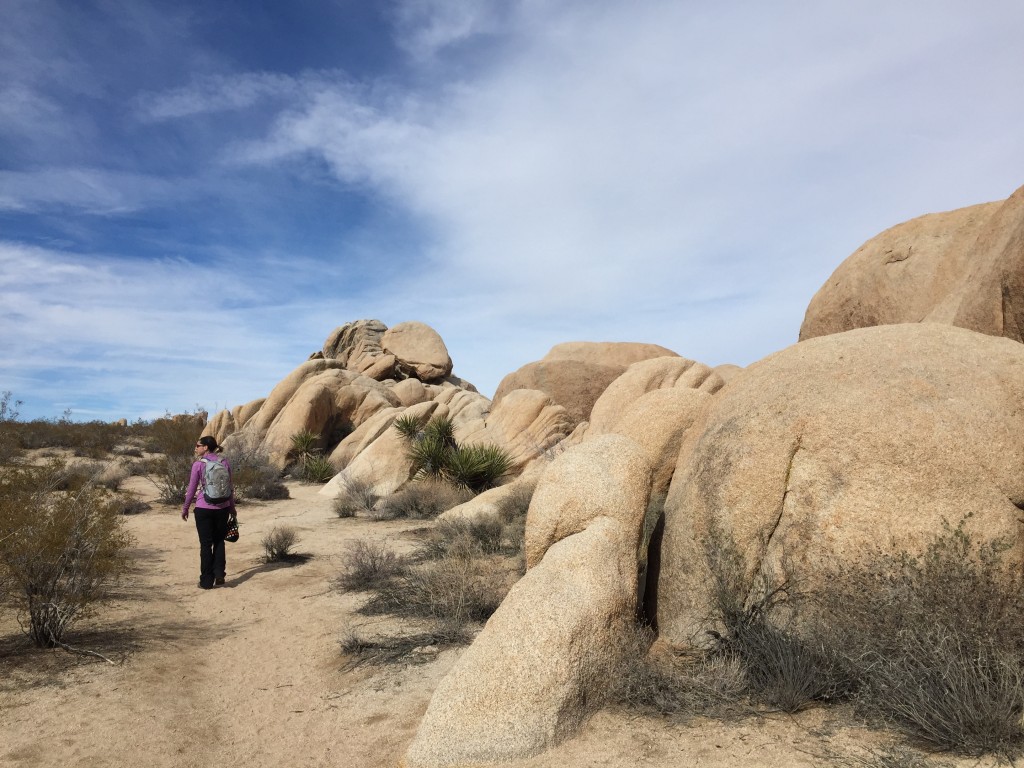 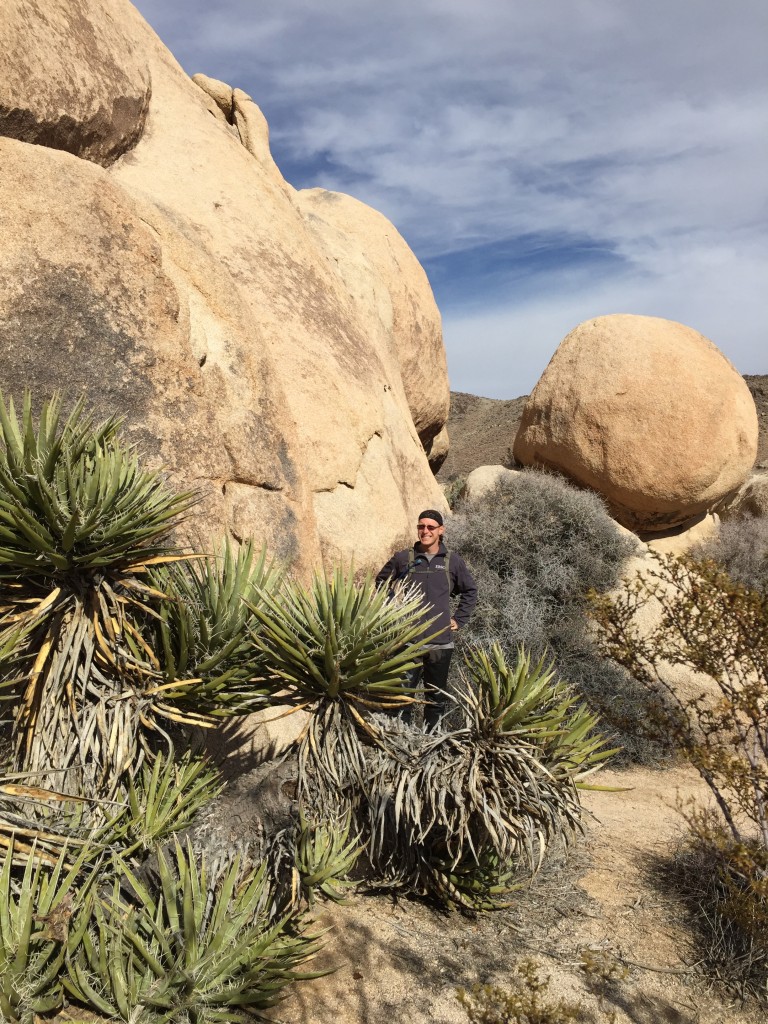 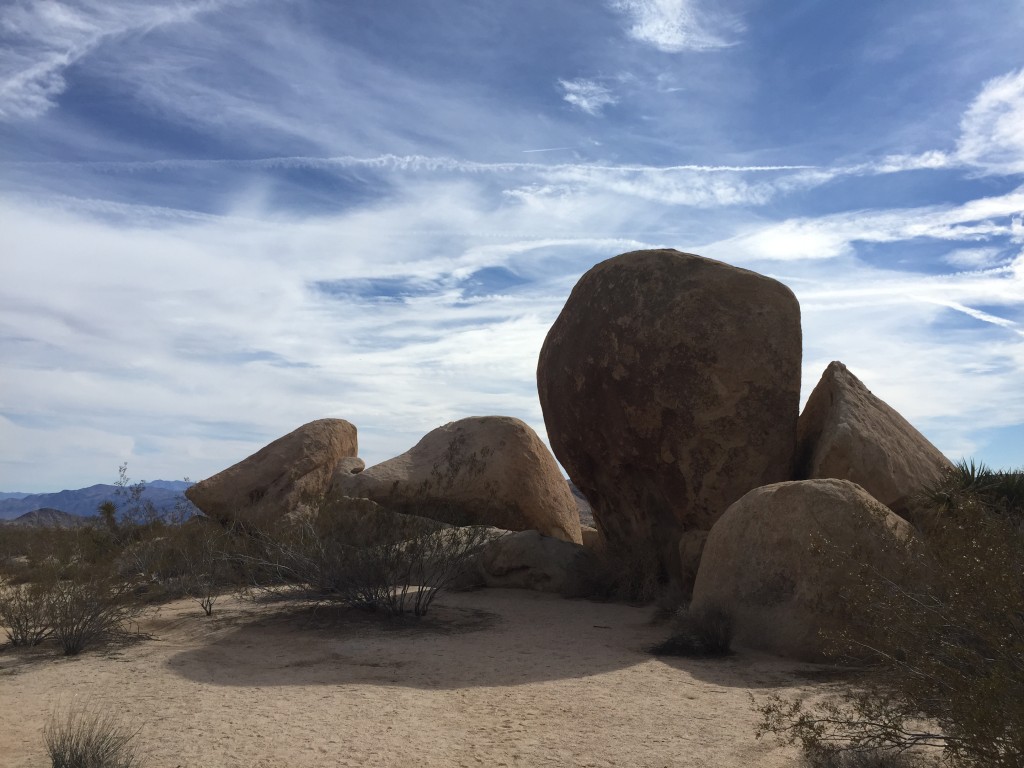 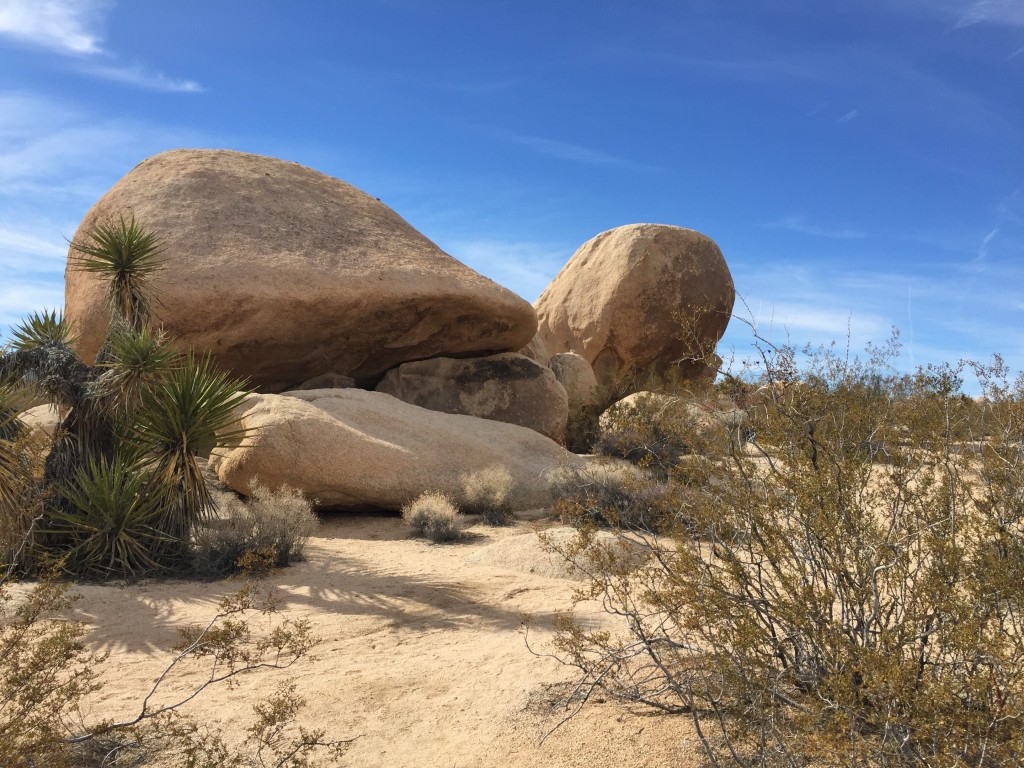 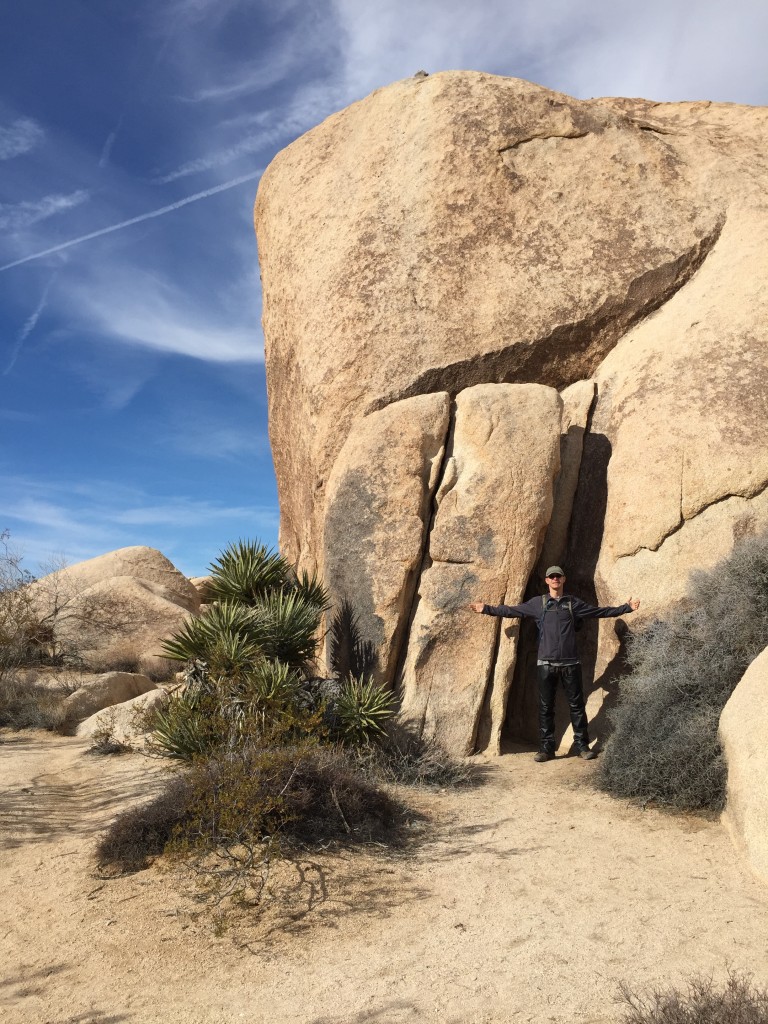 Of course, we stopped and saw the Joshua Trees up close and personal (not too personal, after that first one… the points on their leaves aren’t just decoration!) It’s easy to see why the yucca and the JT’s are easily confused – I think I can tell the difference now but am not positive. Maybe after seeing a few hundred more… 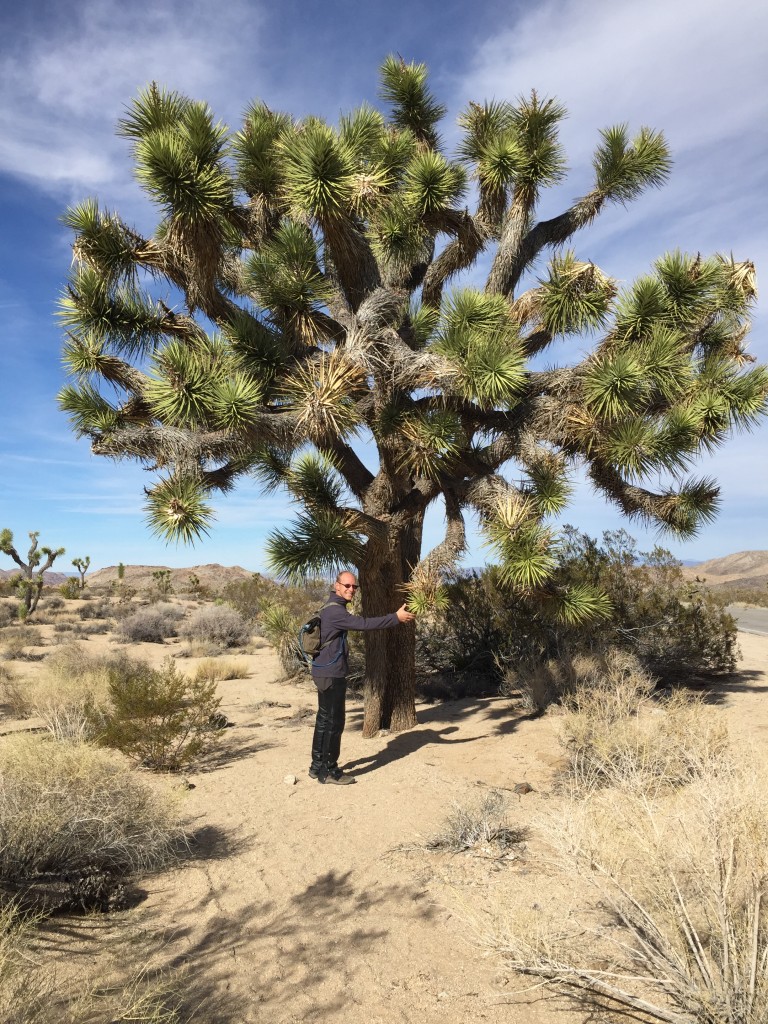 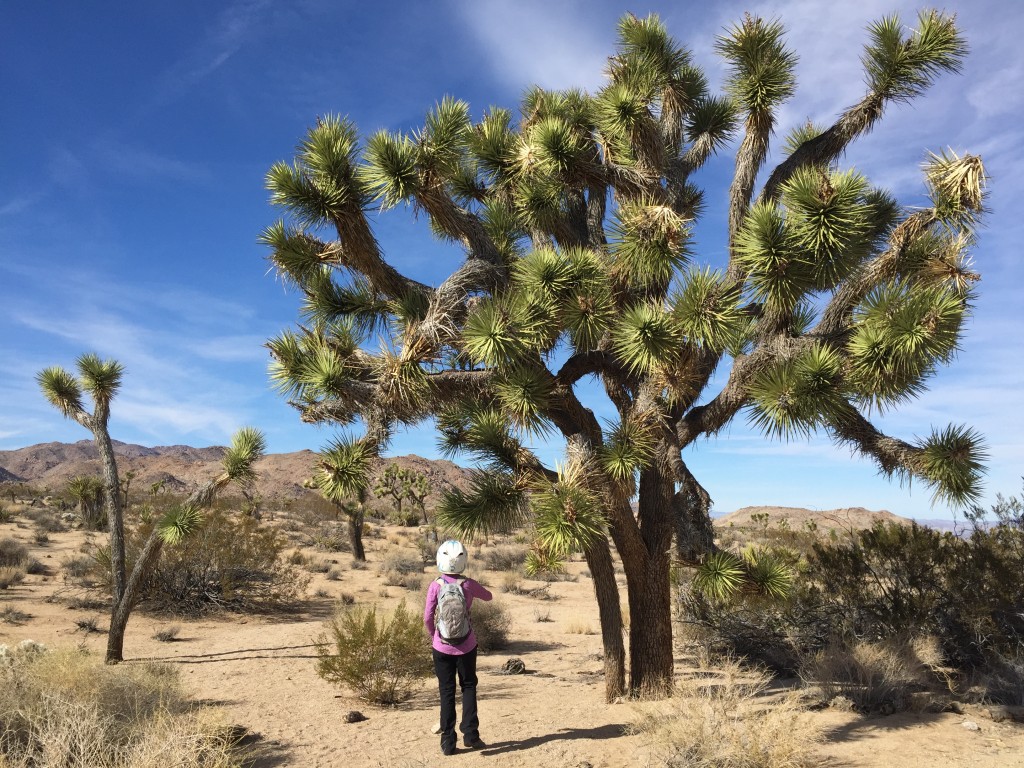 On through to the other side of the park, to the northern visitors center. Then a gas stop and on down the road a few miles to the 49 Palms Oasis trail. We hiked about 2/3 of the way in before turning around – it was about to descend down into a valley, we could see the palms from the peak, and we are racing the sun. 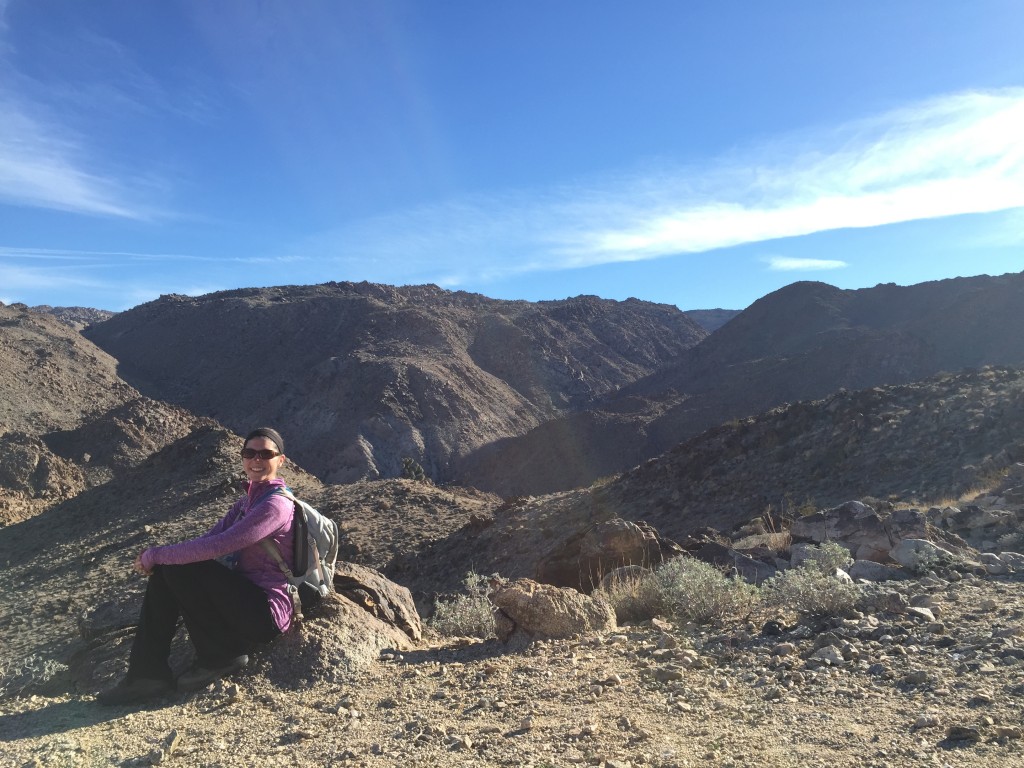 Took about an hour to get home. I dropped Ashley off, went and topped off the gas for tomorrow’s venture, and the sun set shortly after I returned home.

Leftovers for supper, exercise for the day, and then bed time. The change in time zone has thrown us off. The sun rises when I’m getting up at my early time and sets mid-afternoon. It’s been gone for a few hours before bed time so we’re sleepy early.